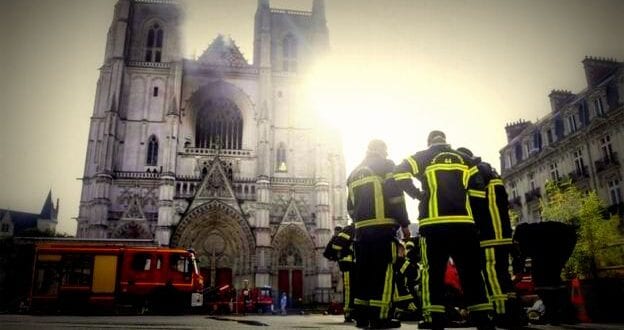 Persecution: Churches burn all over France, 1000 vandalized in one year #HagiaSophia

Herland Report: As the Byzantine architectural masterpiece, Hagia Sophia in Constantinople, Istanbul is turned into a mosque, the focus of Islamist intolerance against religious plurality is again in focus.

Hagia Sophia has been seen as a symbol of the secular nature of modern Turkey.

With the dramatic change in the status of the original Orthodox Christian church, many view it as the Islamist Muslim Brotherhood succeeding in yet another step to reshape Turkey along Islamist radical lines.

In Europe, similar hatred for the roots of Western civilizations continue.

For instance, France experienced over 1000 attacks on churches and vandalizations in 2018 alone. A January 2017 study revealed that “Islamist extremist attacks on Christians” in France rose by 38 percent.

Recently, arson was suspected in fire at Saint-Pierre-et-Saint-Paul cathedral in Nantes recently. Only a year ago, Notre Dame in Paris was in flames, not much has been heard of this since.

A thousand churches were vandalized in France in 2018 alone. Mystery still surrounds the burning of Notre Dame Cathedral in Paris, the very symbol for France’s Christian heritage.

Even before the fire was extinguished, French authorities stated that the Notre Dame fire was a “mistake due to renovation.” How did they already know?

Paris’ Church of St. Sulpice burned just a few days earlier, on Sunday, March 17, set afire by arson – as many churches have in France the past year. And  Basilica of Saint Denis.

Still, French authorities ruled out arson in Notre Dame even before an inquiry into the matter, which some characterized as a political decision, writes historian Hanne Herland in her weekly column at World Net Daily, America’s leading conservative outlet.

The Notre Dame consumed by flames was instantly described by the joint mainstream media as an isolated happening. Why?

Over 1,000 churches have been set afire, vandalized and subjugated to theft in France in 2018 alone.

Over 80 percent of the desecrated places of worship in France are Christian churches, according to police reports. It is a massive scandal.

The situation is horrifying: In the same period as the Notre Dame burning, the Saint-Denis basilica outside Paris was vandalized, and in Notre-Dame-des-Enfants, in Nimes, human poo was formed as a cross on a wall, its consecrated bread found in the garbage.

Human excrement is smeared on and in French churches on a regular basis, a well-known method to demonstrate hatred against that which is sacred.

Two churches are now desecrated every day, yet French politicians remain locked behind a code of silence, including the clergy.

Very little is done to stop it, though the rumors state that the priesthood and church leaders are desperately pleading for the government to react.

“The desecration continues to grow in Europe. Recent acts on statues of the Virgin Mary in French churches show how much these gestures are the result of barbaric hatred. They call for reactions. Catholics can no longer remain silent,” writes Cardinal Robert Sarah, January 10, 2020.

“The fire in Nantes Cathedral, after Notre-Dame de Paris, should make our elites reflect on the great disorder and the great change, decivilization is underway”, Philippe de Villiers, the author and former French minister commented.

Six major French cathedrals and churches have caught fire during the last year and a half: Notre Dame, Nantes, Rennes, Saint-Sulpice, Lavaur and Pontoise, reports Gatestone.

The fire in Nantes Cathedral destroyed stained glass windows and the grand organ at the Saint-Pierre-et-Saint-Paul cathedral, which dates from the 15th Century.

The examples are seemingly endless. As Islamic scholar Raymond Ibrahim writes, the St. Nicholas Catholic Church in Houilles was vandalized on three separate occasions in February; a 19th century statue of the Virgin Mary deemed “irreparable” was “completely pulverized,” and a hanging cross was thrown to the floor.

The Saint-Alain Cathedral at Lavaur was desecrated and crosses smashed, the altar cloth burned and the arms of a crucified Christ mutilated in a mocking manner.

As the French media do not mention the ethnic origin of the perpetrators, it is hard to know to which degree the vandalization is linked to Muslims or secular extremists, yet smearing poo on churches and leaving excrement on altars is hardly a typical European way of demonstrating disdain.

The Herland Report Scandinavian news site, TV channel on YouTube and Podcasts have millions of readers/viewers yearly. It is a great place to watch interviews and read the articles of leading intellectuals, thought leaders, authors and activists from across the political spectrum. The Herland Report believes in freedom of speech and its editorial policy resides above the traditional Left vs Right paradigm which we believe has lost its relevance and ability to describe the current driving forces in Western politics.
Previous West silent about Islamist Persecution of Christians #Turkey, Hagia Sophia
Next The Covington Scandal defamation lawsuit: CNN Washington Post pay Nick Sandmann 500 million in damages