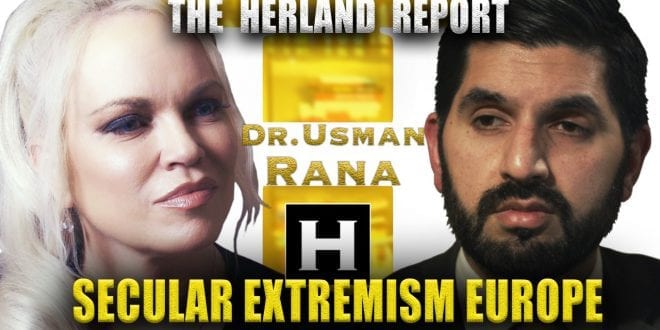 He also addresses the growth if Islam in Europe, the need to defend Christianity and respect for religious freedom. Watch it here.

Dr. Mohammad Usman Rana is a Norwegian columnist, author, medical doctor, and a regular at The Herland Report. His groundbreaking analysis on atheist secularism in Europe and defense of Christian bishops has made him a respected Scandinavian voice worth listening to.

“Today secularism is often defined as atheism, meaning if you are “secular”, you are an atheist. Neutrality is equally defined as “godlessness”, Rana says.

Yet, the term has been redefined to mean something completely different than its original essence. To equate atheism with secularism was not the historical Western definition.

“Secularism was invented in the 1600s as a guarantee that all faiths would be respected. Secularism was never defined as atheism, but rather the very opposite,” he asserts.

“To be secular meant to respect religious freedoms for all,” says Dr. Rana in a fierce attack on the illiberal atheism that permeates the European public discourse.

Atheist Extremism and Intolerance in Europe. Rana’s brilliant article, “Secular Extremism” is of vast importance. Here he states that Europe needs to define how it wants to look upon faith; whether it wants to be an extreme secular atheist system with low tolerance for religion, or a moderate secular state which respect religious freedom.

Over 80 % in the West believe in God, yet only 2-6 % are atheists world wide. Why is a small atheist minority allowed to tyrannize the rest of us?

Why are the 80 % harassed, belittled, disrespected and mocked? Why are Muslims generalized as a group and portrayed as if most are “terrorists” in the media?

Why is there little or no focus on the needed dinstinction between criminal immigrant elements and law abiding Muslim citizens?

It constitutes a fundamental injustice when a Muslim is judged solely based on his ethnic origin rather than conduct as a law abiding citizen.

Equally, why are Christians disrespected in the mainstream culture today? How long will we tolerate the tyranny of the minority and the discrimination of the majority?

We live in a society where majority views and traditional values are scorned, as atheism is elevated by a small elite with little or no respect for the majority views.

“My hope is that Europe chooses this moderate or American type of secularism, which was recommended by religious people such as Thomas Jefferson and Benjamin Franklin.”

“We should be better at working together as religious individuals and as people of faith. I think that we should fight for religious freedom together, both Muslims and Christians. We should collaborate when it comes to conservative good values.”

Dr. Rana: “Let me give you one example. We have many youngsters now listening to music which contains degradation of women, nakedness, violence, drugs. Yet, what we need is music with positive lyrics, empowering youngsters, empowering good and conveying good values.”

“We may introduce good ideas like being nice to elders, nice to your neighbour, which is a very core principle of Christianity, Islam and Judaism. We should reintroduce them back in to European society which is increasingly becoming colder and hedonistic.”

“We should speak more to each other and try to unite in order to fight for these good values. It worries me that there are many divisions between Christians and Muslims.”

“I would argue that there are some things that we are doing very wrong in Europe. Today, the divisions are creating racial and religious ghettos in the cities. We do not want this.

Previous What to do about Inflation, according to famous political economist
Next Archbishop Viganò Supports Trucker Convoy: Stop Elite New World Order Tyranny