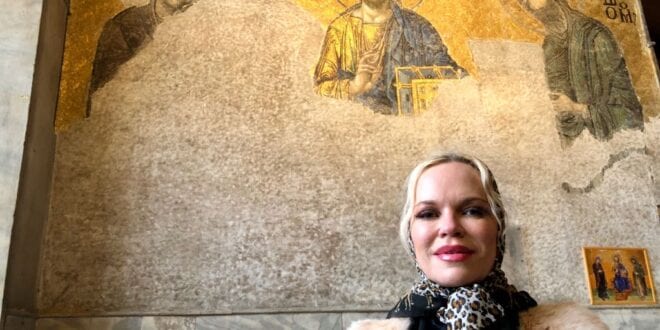 Erdogan Islamism tightens at the expense of Christianity in Turkey: Hagia Sophia

The iconic, historic monument Hagia Sophia in Istanbul, Turkey, now has been turned into a mosque, reflecting the Islamist intolerance for religious plurality in the Middle East.

Hagia Sophia was a centerpiece of Orthodox Christianity, which dominated the Middle East before the Islamic Conquest from the A.D. 600s. In 1453, Mehmed II conquered Constantinople, marking the end of the Christian East Roman Byzantine Empire. Hagia Sophia was turned into a mosque.

They also covered the church’s Christian icons and gold mosaics, partly by installing massive Islamic calligraphy panels over them.

Hagia Sophia has been seen as a symbol of the secular nature of modern Turkey. With the dramatic change in the status of the complex, many view it as the Islamist Muslim Brotherhood succeeding in radicalize Turkey along Islamist lines.

The change in status effectively stops Christians, tourists and others from freely entering the premises during opening hours. Anyone who travels widely in the Middle East knows that Christian churches are open to everyone, but mosques are very often open to Muslims only.

Only particular mosques, often buildings of historic significance, allow people of other faiths or tourists to enter for short periods of time. Once prayer starts, Christians and others are told to leave, often in a very harsh manner.

The Muslim conquest of the Christian Middle East implied that tens of thousands of churches in the region instantly were reshaped as mosques. This explains the close resemblance of historic Orthodox churches and mosques, as many of these buildings were churches before the Muslims took over and erected minarets.

Islamist radicalism is a growing problem in the world, partly due to its remarkable intolerance against any belief or view that does not display total submission to its own values and ideas.

The Islamist, Wahhabi-inspired system characterized the terror group ISIS as well as rebel U.S.-supported groups in the region that often work as mercenaries on behalf of foreign powers. Turkey’s role in the Syria war spills into this.

It remains to be seen whether the joint U.S.-Saudi effort under Crown Prince Mohammad Bin Salman succeeds in moderating the literature and Quran versions, in order to de-radicalize Islam’s Wahhabi segments.

Local protests have been made in Turkey against the changing status of Hagia Sophia: “An organization supporting the Ecumenical Patriarchate of Constantinople has asked President Trump to intervene in a case where Turkey might turn a historic Istanbul church building into a mosque,” writes Aleteia.org.

The letter to Trump warned that the plan to turn Hagia Sophia into a mosque directly challenges religious freedom.

“It is part of ongoing efforts to delegitimize the remaining Christian population of Turkey, further eroding their religious freedom, and to obliterate a significant element of the Christian heritage of Turkey and the surrounding region, as well as of the entire world,” read the letter, written by Anthony J. Limberakis, M.D.:

The Christian persecution in Turkey has been notorious the past years; as few as 2,000 Orthodox believed to remain faithful in Istanbul, according to sources on the ground.

President Erdoğan’s ambitions to expand Turkish dominion in the region and into Europe challenges the already frail stability. The EU pays Turkey billions of euros that may be viewed as “protection money” or “tax” to Turkey. In return Turkey is to control and prevent the flow of illegal immigrants into Europe.

There is no need to remind anyone of the fact that whoever you pay tax to is the leader in the group. Strongman Erdoğan has reason to be content with the current European weakness.

In addition, the recent Turkish offense in Libya demonstrates how Europe uses NATO member Turkey to push their own agenda, as Italy and other central European nations are dependent on access to Libyan gas.

Erdoğan also steadily pushes the boundaries in the field of oil and gas explorations, in conflict with both Cyprus and now Greek interests.

Egypt and its allies’ reaction and support of the Khalifa Haftar forces in Libya reflects the growing worry about Turkey’s growing expansion. The changing status of Hagia Sophia may be viewed as yet another sign of the growing power of Turkey. Zero respect for religious plurality is the message.