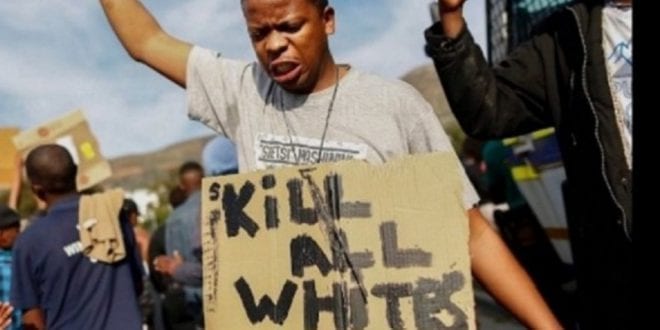 Europeans allow gross violation of its own population Sweden

Herland Report: Paul Craig Roberts: Here is a video of one of the migrant gangs that have been welcomed into Europe sticking a pistol’s barrel into the mouth of a male Swedish teenager and ordering him to dance.  Europeans allow gross violation of own population.

Try to imagine what would happen to a Swede who stuck a gun’s barrel into the mouth of a privileged invader.  No chance of that.

The spirit of the Vikings is stone dead in Scandinavia. The cowards even look the other way when their women are gang raped.

Having been taught that it is racist, and perhaps a crime, to oppose invaders from the Third World, instead of fighting back the Swedish teenager complies and accepts, like a good European male, the humiliation, writes Dr. Paul C. Roberts, chairman of the Institute for Political Economy and one of America’s leading political economists. (Feature photo: Illustration from South Africa, which is plagued by gross and public racism against its White population)

Perhaps Identity Politics is correct.  The days of “the whites” are over.  The days of white people brainwashed into cowardice and impotence are at an end. Of course, all of these decadent European countries have gun control laws, but nevertheless, the recent invaders are armed.  I have heard nothing from the gun control lobby about disarming them. Europeans allow gross violation of own population.

Try to imagine what would happen to a Swede who stuck a gun’s barrel into the mouth of a privileged invader. No chance of that. The spirit of the Vikings is stone dead in Scandinavia. The cowards even look the other way when their women are gang raped.

The gangs of the invaders are so aggressive, because they can sense that there is no fight in the people whose countries they have invaded.  They also know that for members of the core white populations to resist them constitutes racism and a hate crime against a privileged migrant.

White girls as young as 10 are subjected to gang rapes.  The authorities no longer collect statistics on migrant crime.  It is considered racism to do so. Europeans allow gross violation of own population.

Scandinavian women are discouraged from reporting their rapes by privileged migrants as complaints against migrant crime is a form of racism, and the politicians are afraid of being known as a racist country.  We have witnessed the resurrection of the ancient English aristocratic practice of “first night,” the privilege of the lord having the right to break in the bride for the groom.

Do you remember all those photos and news report videos of all those dumbshit European women with banners welcoming the over-running of their European countries by the invaders?

They were well paid by George Soros for the propagandistic orchestration designed to silence the protests of nationalists at the invasion of their countries.  A goodly number of these dumbshit women have now been raped by those they were paid to welcome.  I suppose we can dismiss it as a new variant of prostitution. Pay me and I will accommodate my rapist. Very few of the crimes of privileged invaders against their dumbshit European victims are reported, because they are suppressed both by the political authorities and the media which fears being called “racist” more than the presstitutes fear death itself.

But the few accounts that do get reported show that Europeans are being subjugated by the third world invaders who do not need to use weapons or military force, because the self-doubt and self-incrimination of white peoples makes them unable to resist.

Insouciant white peoples permitted their corrupt governments to commit all kinds of crimes against other countries.  As these crimes come to light, people of European stock feel guilty and unworthy, because they have a moral conscience, unlike those who are over-running them.

If you want to understand how the psychology works that has doomed the white race, read The Camp of the Saints.  This novel is our present and our future. It is the most prescient novel ever written.  Indeed, it is a totally accurate prediction of the future.

Perhaps Identity Politics is correct.  The days of “the whites” are over.  The days of white people brainwashed into cowardice and impotence are at an end.

The Americans and their empire are incapable of self-defense.  All white gentiles can do is to attack Israell’s enemies for Israel, thus multiplying the crimes of whites and the associated guilt that has destroyed a once vigorous people who made the modern world with all its faults and advantages.