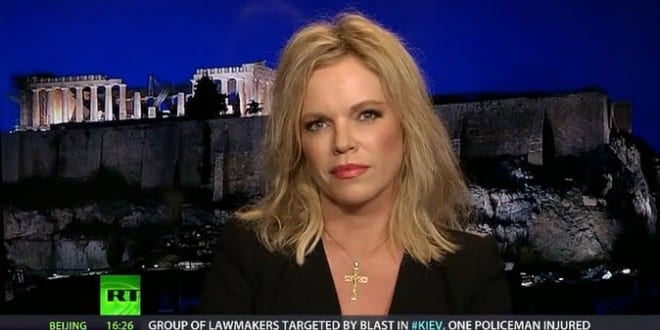 Hanne Nabintu Herland on RT Worlds Apart: Interview with RT, one of the world’s largest news channels reaching around 700 million. I speak about the growing Western Propaganda, the problem of political correctness and the decay in traditional Western values.

On how and why the leading liberal utopianist political elites in the West, led by a strong anti-Christian push by the current US elites, got it wrong on “the Arab Spring” and how the US is currently engaging in serious atrocities in the Middle East.

I also speak about Norway’s role in the NATO Libya war,  and the need for Europe to break with the extreme liberal US’ push for new wars in Europe and in the world.

Hanne Nabintu Herland on RT Worlds Apart: As most people know, Libya enjoyed peace for more than 40 years. Gaddafi was a liberal supporter of women’s rights, and women participated in the military forces and were encouraged to pursue an education, among other things. Many Libyans now reminisce the free health services for everyone and free education for both men and women.

The Gaddafi liberal view on women was strongly disfavoured by groups affiliated with the Salafi ideology, as well as the later al-Qaeda factions that NATO later relied on in order to control Gaddafi.

The right for free education was secured for both women and men and the right to apply for education abroad if Libya did not provide the right institutions, was also paid for by the state of Libya. This applied to women as well, Gaddafi remaining opposed to the Al Qaida extremist view on women, which he stated was in-Islamic.

As another example, when starting out as newlyweds, the average Libyan would receive what equates to around 50,000 U.S. dollars in support from the state to help start up a family; loans were given to citizens at 0% interest.

Further, buying a car was heavily subsidised; car prices were far lower than in Europe and practically every family could afford a car. Bread, petrol and other essentials were also heavily subsidised. There was no such thing as an electricity bill in Libya; electricity was subsidised by the state and free for citizens.  The state subsidised the price of cars purchased by private parties by 50%.

Hanne Nabintu Herland on RT Worlds Apart: The central bank was completely and entirely independent, with no loans from the IMF, the World Bank or other Western institutions. Peter Hoekstra gives a good account of this in his book titled Architects of Disaster: The Destruction of Libya.

Libya had Africa’s longest average life expectancy at 78 years of age, and an infant mortality rate as low as 20 in 1000 births.

One survey said that as many as 82% of Libyans could read and write, compared with 52% literacy in Morocco and 69% in Algeria. According to the CIA World Factbook, the national literacy rate was as high as 94%.

The country had washed its hands clean of the Lockerbie scandal and opened up the once closed-off country to the West. It was Saif al-Islam, Gaddafi’s son, who was instrumental in resolving the Lockerbie case where considerable compensation was paid out to the victims’ families.

Long before 2011, Libya worked closely with the CIA and Western intelligence to take control over Sunni Muslim terrorist groups in the region such as al-Qaeda. Lawrence Wright gives a good account of this in The Looming Tower: Al-Qaeda and the Road to 9/11.

Gaddafi was known for being al-Qaeda’s arch enemy; they had attempted to take his life on multiple occasions. (1) Through their cooperation, the United States and Libya created stability in the region and controlled the flow of refugees to Europe, which was a major issue at that time. Gaddafi had an agreement with Italy to take control of the illegal activities that to a great extent were led by gangs of human smugglers.

Muammar Gaddafi, however, led a state with a strong  centralized organization. He was known for imprisoning people without charge or trial, supporting guerrilla movements and leading a complex country with diverse African ethnic minorities that had historically been at each other’s throats.

Despite cracking down on militant oppositionists, Gaddafi was also able to keep the peace and maintain order for over forty years in the socialist state. He was for instance the guardian of dark-skinned Libyans. As is known, the multi-ethnic state of Libya is made up of a number of ethnic groups in the south with dark skin, and Gaddafi was openly critical when speaking out against the strong racist tendencies towards dark-skinned individuals in Arab countries.

In the years leading up to 2011, Libya had been characterized by a marked willingness to commit to growth and reform. Some claim that the changes came in the wake of Gaddafi witnessing the attack on Iraq and how Saddam Hussein was brutally murdered. They say he understood that the time had come to change tactics with the West.

Previous Who is most racist? Black racism never spoken of – Larry Elder
Next Yemen, starvation is crushing a nation