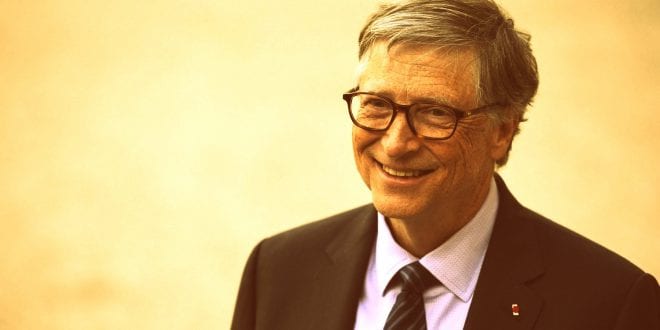 This, combined with the CNN mass media hysteria forefront, has, in turn, caused a once-in-a-century financial depression.

The economic depression may not be due to the virus itself, but rather the panic reaction that was created with the corresponding government shutdowns, as advised by Gates.

Who has access to influence prime ministers’ minds? Pandemic experts or the world’s shrewdest billionaire investors?

Do globalist perspectives rule us or national interest for the benefit of the people?

At The Herland Report we suggested early that the crisis should be seen in relation to the current U.S.-China trade war.

We wrote about the topic of World Health Organization chief, Marxist-Leninist Dr. Tedros’ possible politization the day before President Trump addressed it. Two days later it was headlines across the world.

Everyone else, such as the WHO-favored Norwegian prime minister, Erna Solberg, are addressed as dignitaries. Oil rich Norway has the world’s largest sovereign wealth fund and is steadily befriended by oligarchs such as Bill Gates.

Through its CEPI work, the current Norwegian government is allied with Gates, Norway funding billions into vaccine programs.

A strong defender of the current strategies of the WHO leadership, now under scrutiny for its mismanagement in reporting during the COVID-19 scandal, Solberg has taken a remarkable strong stance while other European leaders question the WHO.

Her over 20 minute long interview with CNN as well as a WHO speech illustrate the Norwegian willingness to defend the status quo.

Global private capital has an unprecedented access to taxpayer money.

Norway, WHO numbers and Bill Gates, the non-democratically elected billionaire

Non-elected billionaire oligarch Bill Gates rule public health through control over governments? It is a massive problem that non-democratically elected Bill Gates shapes our democracies with “philanthropist” billions. We were supposed to combat Covid-19, not shut down Western economies.

Gates pushed the idea of the pandemic of the century. He even suggested in a recent interview, that the opening up should not come until there is a digital immunity proof documenting who is vaccinated or not. So, our nations should be shut-down for months, destroying Western economies completely?

The vaccine would be Gates owned, we assume. Or CEPI Norwegian owned with Gates?

As it turns out, Gates has been wrong so far. Up to 650 000 people die yearly of a regular influenza, according to the China and Gates friendly WHO. Pr. April 12, 112 447 individuals globally, according to Worldometer, have died with Corona.

Non-elected billionaire oligarch Bill Gates rule public health? In 2018 alone, over 80 000 were killed by the seasonal influenza in the US, reported CNN. No media attention back then.

This year’s US Center for Disease Control and Prevention numbers estimate that, as of mid-March, between 29,000 and 59,000 have died due to regular influenza illnesses.

Nobody compares these numbers to Covid-19′ 21 000 deaths with Corona. Note that the correct numbers are now even harder to estimate, as the US allows “suspicion of Corona” to be enough for medical personnel to state “death by Corona.”

This simply is madness as we therefore have no reliable information from the US as of who actually died from or by or assumed fatality from Covid-19.

When you think about it, is is quite amazing that modern societies like ours are so unable to handle the fear of a bug. CNN is much to blame.

The media has pushed the fear of the pandemic with such force that they are complicit in the destruction of national economies. As the dust settles, this will become even clearer. Read the CNN summing up their own Corona frenzy here.

Nobody listens to pandemic experts, everyone listens to billionaire Bill Gates

Non-elected billionaire oligarch Bill Gates rule public health through control over governments? So many have spoken of the danger in not allowing herd immunity. The need to protect the old and the medically frail is key, without destroying the economy.

Am alarming interview with Germany’s forefront virus expert in microbiology and a world authority on the subject, Dr. Sucharit Bhakdi – sends a chillingly apocalyptic message:

Non-elected billionaire oligarch Bill Gates rule public health? Nobody listens to Dr. Bhakdi, Dr. Wittkowski or the many others warning of lockdown as we have world leader and “pandemic expert” Bill Gates all over every news channel.

For the first time in history, lack of supply or demand did not shut down the economy and create the depression. State leaders forced the shut-down on their own nations, local businesses, industries, corporations and employers. The situation is unprecedented in history.

Since Gates is so eager to control health, will he now use his billions to pay for the loss of business for millions of us regular folks as we all now enter into the depression of a century?

Previous Covid-19: WHO Tedros Has a Long History of Cover-Ups #Norway Erna Solberg
Next European surge in anti-Semitism: The heritage from Marxism #Israelophobia