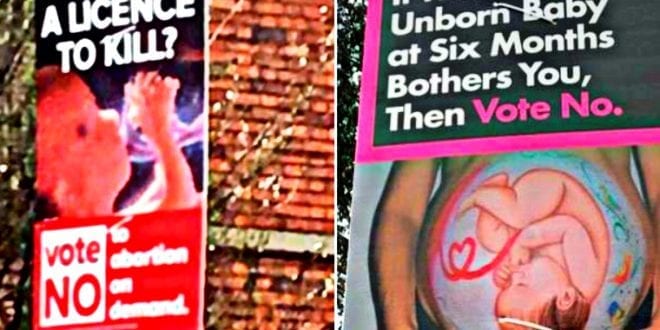 Herland Report: Abortion Holocaust causes Mass Immigration: Ireland recently felt the full force of the Liberal Progressive New Left, as the country was voting whether to keep its strict anti-abortion laws or not.

Its NO-to-abortion groups complaining massively, as the NO side received almost zero positive mainstream media coverage, while the YES campaign was endorsed with full coverage: CNN, BBC etc.

Abortion Holocaust causes Mass Immigration: The media was head over heels over the stories of how happy abortion had made women and how “Middle Ages old-fashioned” those were who voted NO.

Online internet turned out to be the only platform available to the NO campaign to speak to voters directly.

Then Google, YouTube shut down the NO-side’s ability to use the internet and thereby silenced the whole campaign. Massive protests were to no avail, as usual nowadays.

Let’s talk about the hailed abortion culture: It has been presented as the greatest blessing in the West since the 1970’s. To the ruling Progressive Left, abortion was the path to freedom, as the traditional family was to be demolished in the ongoing social experiment to see whether society would be a better place without it. The tragic result has been massive cultural decline and unbearable family tragedies. We just don’t hear about it in the press, as these stores are not covered.

She was to be evaluated by the job she had outside the home, freed from the burden of bearing children, her role in the home defined as worthless. In a system with war in the traditional family as the goal, abortion of the unwanted becomes a must.

It is true that the question of abortion covers a range of difficult issues, from rape and pedophilia to social reasons.

Yet, we arguably live in a dramatically child-hostile culture that idealizes the childless, promiscuous woman, divorce being hailed as her “moment of freedom”.

Abortion Holocaust causes Mass Immigration: Since legalizing the woman’s right to remove her own offspring, the fertility rate has dropped dramatically in the West, with perplexing consequences.

This is the irony, many countries in Europe now import approximately the same number of immigrant workers as the number of abortions.

The generation that was supposed to do the job, simply is not there. They are replaced by large-scale import of Muslim and other immigrant groups who love children and regard these as a gift from God.

Since atheist feminists have worked so hard to implement disdain for their own offspring, other and stronger groups naturally take over and form new dynasties in the West.

Why complain about immigration? It is the direct consequence of the desired childlessness.

The West has, with the help of the suicidal Progressive movement, caused its own decline. Italy has the lowest birth rates in 150 years, with 1.4% fertility rate, Denmark 1.7%, Switzerland 1.5% and Portugal 1.2%, Germany 1.4%, according to 2016 numbers from World Bank.

According to World Health Organization (WHO) and other surveys, abortion rates in Scandinavia, UK, and France rate as high as 20–30%, Germany, Finland and Benelux 11–14%.

In the US, over 50 million have been lost to abortion since 1960, according to former Newsweek editor Meacham in what he calls “The end of Christian America.”

If you add the pictures of the screaming, women, fuming with anger and rage in pro-abortion parades, you know you are watching the end of a culture. No childless society can survive.

During university fieldwork among Muslims in Kenya in 2004, I was confronted with the following paradox: a Muslim leader asked me why Westerners call Saudi Arabia “barbarians” when they chop off the hands of thieves as punishment for stealing. He was amazed that this Arabic custom could be so harshly denounced, with reference to human rights.

Yet in the West, he pointed out: “The woman has the right to kill her own child,” saying that, unlike thieves, these children are innocent and gifts from God, and have committed no crime.

When looking at demographics, it is only a question of time before the traditional European becomes a minority in Europe. We may guess that this is what the Progressive Feminists wanted: The end of their bloodline.