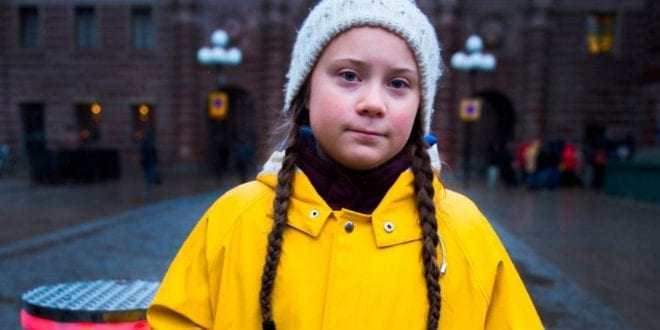 The Billionaires behind the Green Agenda #GretaThunberg #Davos

Herland Report: The billionaires behind the Green Agenda: Within little more than a year everyone imaginable seems to have jumped on the bandwagon of the new green agenda of radical measures to “stop” climate change.

Now the bastion of corporate economic globalization, the Swiss Davos World Economic Forum, has made its main theme this year:

“Stakeholders for a Cohesive and Sustainable World,” with major focus on such notions as

“How to Save the Planet.”

Of course, featured speaker was the young Swedish activist Greta Thunberg. What few realize is how carefully all this is being orchestrated to prepare a massive shift in global capital flows where a handful of financial giants stand to gain, writes writes F. William Engdahl, strategic risk consultant and lecturer. He holds a degree in politics from Princeton University and is a best-selling author on oil and geopolitics. The article was first published at New Eastern Outlook.

From Greta to Bonnie Prince Charles, the themes at Davos 2020 were dominated for the first time by the climate change agenda.

What comes through the interstices of the meeting of some 3,000 of the world’s corporate giants, is that a major global campaign is being orchestrated and it includes the world’s largest capital investment fund heads and the world’s major central bankers.

In 2010 the head of Working Group 3 of the UN Intergovernmental Panel on Climate Change, Dr Otmar Edenhofer, told an interviewer, “…one must say clearly that we redistribute de facto the world’s wealth by climate policy. One has to free oneself from the illusion that international climate policy is environmental policy. This has almost nothing to do with environmental policy anymore…”

What better way to do it than to start with the world’s largest money controllers like BlackRock?

It was no accident that Davos, the promoter of globalization, is so strongly behind the Climate Change agenda.

Davos WEF has a board of appointed trustees. Among them is the early backer of Greta Thunberg, climate multi-millionaire, Al Gore, chairman of the Climate Reality Project. WEF Trustees also include former IMF head, now European Central Bank head Christine Lagarde whose first words as ECB chief were that central banks had to make climate change a priority.

The board also includes the influential founder of Carlyle Group, David M. Rubenstein. It includes Feike Sybesma of the agribusiness giant, Unilever, who is also Chair of the High Level Leadership Forum on Competitiveness and Carbon Pricing of the World Bank Group. And perhaps the most interesting in terms of pushing the new green agenda is Larry Fink, founder and CEO of the investment group BlackRock.

BlackRock is no ordinary investment fund. Based in New York, BlackRock is the world’s largest asset manager with some $7 trillion, yes, trillion, under management invested in over 100 countries. That’s more than the combined GDP of Germany and France.

They dominate the stock ownership of every major exchange in the world, top shareholders of the major oil companies and world largest coal companies. Aspiring German CDU politician Frederick Merz has been chairman of the BlackRock Germany since 2016.

He wrote in a closely read letter that guides numerous corporations seeking investment from some of BlackRock’s $7 trillions, “Climate change has become a defining factor in companies’ long-term prospects.”

Citing recent climate protests, Fink states, “awareness is rapidly changing, and I believe we are on the edge of a fundamental reshaping of finance. The evidence on climate risk is compelling investors to reassess core assumptions about modern finance.”

Declaring that, “climate risk is investment risk,” Fink then asks an impossibly difficult question of how climate risks will impact entire economies.

He has the answer, we learn. Referring to what he calls “a profound reassessment of risk and asset values” Fink tells us, “because capital markets pull future risk forward, we will see changes in capital allocation more quickly than we see changes to the climate itself.

How will Fink and friends shift their investment flows, investment, by the way, of other peoples’ money, the savings of millions of us?

BlackWater plans to demand that companies it invests its $7 trillion into show proof that they are green compliant by, “making sustainability integral to portfolio construction and risk management; exiting investments that present a high sustainability-related risk, such as thermal coal producers; launching new investment products that screen fossil fuels; and strengthening our commitment to sustainability and transparency in our investment stewardship activities.”

Translated, if you don’t follow the demands of the UN IPCC and related groups including McKinsey & Co., you lose big money.

Billionaires behind the Green Agenda: As part of his claim to virtue on the new green investing, Fink states that BlackRock was a founding member of the Task Force on Climate-related Financial Disclosures (TCFD). He claims, “For evaluating and reporting climate-related risks, as well as the related governance issues that are essential to managing them, the TCFD provides a valuable framework.”

TCFD was created in 2015 by the Bank for International Settlements, chaired by fellow Davos board member and Bank of England head Mark Carney.

In 2016 the TCFD along with the City of London Corporation and the UK Government created the Green Finance Initiative, aiming to channel trillions of dollars to “green” investments.

And to further insure BlackRock and friends in the world of trillion dollar funds choose the right investment in the right companies, Fink states, “BlackRock believes that the Sustainability Accounting Standards Board (SASB) provides a clear set of standards for reporting sustainability information across a wide range of issues… “

This is reassuring until we look at who makes up the members of the SASB that will give the Climate-friendly Imprimatur. Members include, in addition of course to BlackRock, there is Vanguard Funds, Fidelity Investments, Goldman Sachs, State Street Global, Carlyle Group, Rockefeller Capital Management, and numerous major banks such as Bank of America-ML and UBS.

What is this framework group doing? According to their website, “Since 2011, we have has been working towards an ambitious goal of developing and maintaining sustainability accounting standards for 77 industries.” So the very financial groups who today steer global capital flows to major mining and coal and oil projects since decades will now become the arbiters of what companies qualify to be blessed with money and which not for some future “green bond” investment.

In recent months the world’s leading central bankers have come out declaring climate change, surprisingly, as a key part of the central bank “core responsibilities,” forgetting issues like inflation or currency stability. No one bothers to explain quite how that should work, which is even more disconcerting.

Billionaires behind the Green Agenda: And in recent comments the head of the Bank of Japan, Haruhiko Kuroda, told a Japanese newspaper “Climate-related risk differs from other risks in that its relatively long-term impact means the effects will last longer than other financial risks, and the impact is far less predictable,” he said. “It is therefore necessary to thoroughly investigate and analyze the impact of climate-related risk.”

And in her first comments as head of the European Central bank; former IMF head Christine Lagarde declared that she wants a key role for climate change in ECB policy Review which drew criticism from the German member of the ECB, Jens Weidmann.

Perhaps the most outspoken and active central banker on climate change is outgoing Bank of England head Mike Carney and Davos trustee with Larry Fink.

Carney, who will serve as global warming adviser to Boris Johnson, told BBC recently, citing unnamed pension fund analysis, “that if you add up the policies of all of companies out there, they are consistent with warming of 3.7-3.8C.”

He went on to claim that scientists say the risks associated with an increase of 4C include “a nine meter rise in sea levels – affecting up to 760 million people – searing heatwaves and droughts, and serious food supply problems.” Scary stuff indeed.

As noted above, already back in 2015, Davos Board member Carney, as chairman of the Bank for International Settlements’ Financial Stability Board (FSB), created the Task Force on Climate-related Financial Disclosure (TCFD), to advise “investors, lenders and insurance about climate related risks.”

What is becoming clearer is that the latest global push for dramatic climate action is more about justifying a major reorganization of the global economy, that to a far less efficient energy mode, implying a drastic lowering of global living standards.

In 2010 the head of Working Group 3 of the UN Intergovernmental Panel on Climate Change, Dr Otmar Edenhofer, told an interviewer, “…one must say clearly that we redistribute de facto the world’s wealth by climate policy. One has to free oneself from the illusion that international climate policy is environmental policy. This has almost nothing to do with environmental policy anymore…” What better way to do it than to start with the world’s largest money controllers like BlackRock?