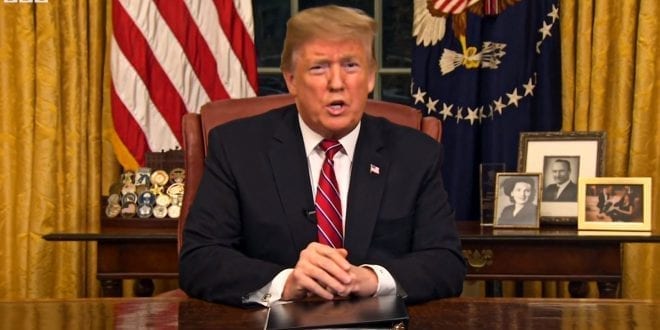 Herland Report: Norwegian Nobel Committee has become notorious the past years for almost solely giving the Peace Prize to US mainstream media favourites, disregarding the requirements stated in the will of the inventor of dynamite,

In Sweden, Alfred Nobel’s family are rattling the sables in discontentment of the rampant politization of the prize in the hands of the Norwegians, the claim being that the Committee willfully disregards Nobel’s will and awards the prize to human rights activists, climate activists and others.

The Committee also criticized for misusing it as a political tool to influence countries’ domestic policies.

In Sweden, Alfred Nobel’s family are rattling the sables in discontentment of the rampant politization of the Peace Prize in the hands of the Norwegians.

We assert that Donald Trump is by far the most worthy candidate to the Nobel Peace Prize 2019. President Trump’s offered to be a notable peacemaker in the North Korea crisis which implied nuclear threats and succeeded in averting an escalation; his effort to halt the Syria war has led to avoiding an all-out World War, his work to end the relentless neo-con aggression on Russia is highly admirable.

But will he get the prize in the current climate where the Norwegian Nobel Committee, with leaders that hardly speak English, is no more than an extended wing of the endless war wishing, neo-con movement?

The Prize goes rather to 15 year olds from Bangladesh or the forests of Congo rather than to world leaders who have averted world wars.

Trump is fully aware of the politization of the Norwegian Nobel Committee and tweets: “I think I’m going to get a Nobel Prize for a lot of things, if they gave it out fairly, which they don’t.”

Trump’s massive achievements are arrogantly ignored by the Norwegian Nobel Committee as the Norwegians steadily choose politically-correct laureates that are hailed by Liberal CNN and New York Times. Independence in Europe truly is no more.

We assume this year’s winner to be the 16 year old media puppet pushed by “end investment in oil and create a world energy shortage” Fossil Free and now publicly subjected to child abuse with the consent of her parents, Greta Thunberg.

Read the open letter to the Norwegian Nobel Committee below, by Daniel W. Drezner, professor of international politics at the Fletcher School of Law and Diplomacy at Tufts University in the Washington Post:

“I am writing to offer my heaviest and strongest possible recommendation that Mr. Donald J. Trump, the 45th president of the United States and the most popular president ever of real Americans, be awarded the Nobel Peace Prize next month.”

I have observed President Trump closely for several years. Because he is an increasingly constant presence on America’s airwaves, there are days when I feel as though I am constantly bathed in his beautiful presence, he writes not without irony.

As a professor with degrees from highly respected institutions, I know I have a very above average brain. Based on my brain after watching lots of Fox News, I strongly assert that President Trump — America’s favorite president — has the wealth, power and ambition that merits your totally rigged and way-too-left-wing prize, writes Drezner sarcastically.

Earlier this week, when a Pakistani journalist told Trump, “If you can solve this outstanding issue of Kashmir, very likely and definitely you’ll be deserving a Nobel Prize,” Trump replied, “I think I’m going to get a Nobel Prize for a lot of things, if they gave it out fairly, which they don’t.”

My smart and handsome president is right! Your system is rigged, but that is okay. Trump’s case for the Nobel is so strong that even you Nordic nitwits should be able to figure it out.

President Trump’s offers to be a peacemaker in the troubled parts of the world speak for themselves.

Indeed, this letter was inspired by Trump’s multiple offers to mediate the Kashmir crisis between India and Pakistan, despite India’s repeated rejection of that offer.

According to the Times of India, “absent New Delhi accepting his role, [Trump] suggested the two countries come together themselves and ‘do something that’s really smart.’” That is perfect, beautiful advice — a true peacemaker delegates the peacemaking to the combatants! In this age of participation trophies, isn’t the fact that Trump wants to negotiate a peace deal worthy of its own award? He hates war almost as much as he hates hurricanes, and those strong feelings cannot be denied.

And it is not just in South Asia where President Trump is interested in peace. He has repeatedly talked about his aim to create a beautiful Middle East peace deal.

It is so important to him that he appointed his son-in-law Jared Kushner, his most trusted subordinate, to work on that peace deal. And that deal is so important to Jared Kushner that he has delegated that task to the only person who makes Jared Kushner look experienced in the Middle East by comparison. If you were tough and smart, you would just award Trump the Nobel now in anticipation of all of this working out so perfectly.

Trump has made a more personal investment in securing peace on the Korean Peninsula, and I think the results speak for themselves.

The president has brilliantly leveraged his real estate acumen to cajole Kim Jong Un into giving up his nuclear weapons and ballistic missile programs in return for developing beach resorts.

Okay, so none of that has happened yet, but Kim Jong Un has written Trump so many beautiful letters — far more than that phony Barack Obama ever received. If you can award the 44th president the Nobel Peace Prize just for being elected, surely you can do the same for the 45th president!

President Trump should be awarded the Nobel not just for the areas where he has made almost-any-minute-now peace, but places where peace will need to be made.

The problems in Venezuela are very serious because President Nicolás Maduro has been so tough and strong in the face of crippling economic sanctions.

The tensions in the Persian Gulf are near an all-time high: the ongoing war in Yemen, the Gulf Cooperation Council embargo of Qatar and the suspected Iranian attack on Saudi Arabian oil fields have put the region on edge. If you award the Nobel to Trump, you will send a powerful signal to other actors in these regions that they have reacted badly to the president’s heavy moves.

I know that some fake people have nominated Donald Trump for the Nobel Peace Prize, but I am not one of them. As a social science professor, I meet the Nobel’s listed criteria for nominating someone.

And let me stress at this point that there is absolutely no quid pro quo between myself and the president to boost his ego with this nomination.

That would be an absurd and very false allegation, typical of the fake news which is the enemy of the people. (As someone who writes for the Amazon Washington Post, I know all too well about this.) Even if there were a quid pro quo — say, I am appointed U.S. ambassador to Norway in return for writing this letter — what difference does it make?

This kind of thing happens all the time! You don’t think other powerful people have thrown their nominators a bone? So even though there is absolutely no quid pro quo — I hate Norway! — if there were a quid pro quo, it would be no big deal.

I hope you stupid Europeans can read good English and accept this nomination and act fast and tough to award President Trump the Nobel. Also, it might make him less cranky. Be smart!