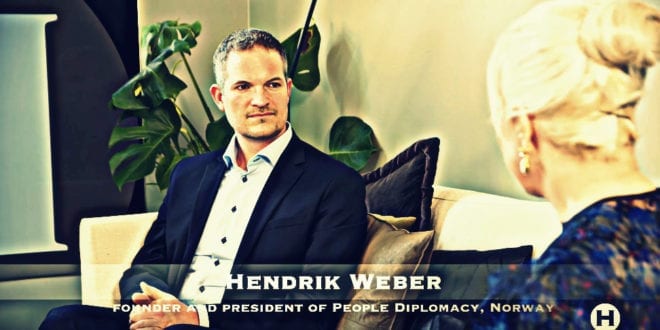 Herland Report TV (HTV): The TV interview with the founder and president of People Diplomacy Norway  Hendrik Weber, has 90 000 views only shortly after its release. It seems evident that many find such interviews intriguing.

Mr. Weber states that if politicians and the media refuse to cover all sides in a conflict, normal people can do diplomatic work and start the dialog in order preserve international peace. Watch it here or at the end of the article.

He says that it is important to show people living in war torn battlefield countries that they are not alone. There are many regular citizens in Europe who do not support the current Western politics of supporting Washington’s war agenda.

They want to do something about it. They want peace in Europe, not war and destruction. People Diplomacy now has branches in Switzerland, Germany, Belgium, Russia and the UK, growing weekly in numbers.

Also read: Interview with the founder of People Diplomacy, Hendrik Weber on visit to Donetsk.

Mr. Hendrik Weber and his steadily growing team has repeatedly travelled to Ukraine, Crimea and other places in order to understand the perspectives we hear little about in Western media.

Recently Weber and his team went to the Donetsk People’s Republic, which he exclusively speaks about in this conversation with Hanne Herland, founder of The Herland Report.

International geopolitics has brought Ukraine to the forefront of the international power game, fueling ethnic strife and conflict.

The Western mainstream coverage tends to only presents one side of the Ukrainian conflict and the media coverage almost solely reflects the geopolitical perspectives and goals of Washington in the quest to dominate Europe’s Eastern borders.

This and more is discussed in the program with People Diplomacy Norway Hendrik Weber.

Our editorial policy resides above the traditional Left vs Right paradigm which we believe has lost its relevance and ability to describe the current driving forces in Western politics. We regularly feature a variety of opinion and analysis from a number of commentators from across the political spectrum, free from the censoring political correctness that now permeate Western media.

Not all views represent that of The Herland Report editorial policy, but we do believe in plurality, diversity and free discussing in non-censored conversations, both in the articles presented as well as on the TV Channel on YouTube. This site offers factual information and viewpoints that might be useful in arriving at an understanding of the events of our time. We believe that the information comes from reliable sources, but cannot guarantee the information to be free of mistakes and incorrect interpretations.