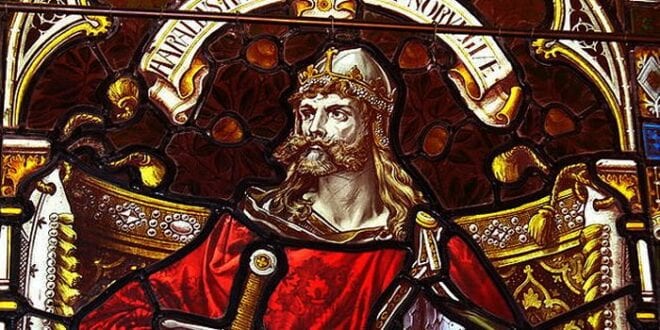 Herland Report:  Orthodox Christianity: Harald Hardrada is considered to be the last great Viking king, as described in our VIKING TV series on YouTube with Georg Olafr Reydarsson, Halvor Tjønn and other Scandinavia scholars and activists.

Our VIKING series tells the tale of the spectacular Viking age and its Norwegian kings: Harald Hardrada, Olav Trygvasson, Olav the Saint, their friends in Russia, Constantinople and the conquest of England in 1066 AD.

The great Viking king of Norway, Harald Hardrada (1015 – 1066) was a true international warrior.

His life was an adventurous Viking journey from Norway to Kiev, to Constantinople, to Palestine, Bulgaria, Turkey, England and more.

His Viking kinsman and Norman ruler, William the Conqueror later conquered England in 1066 AD. A few days earlier the king of Norway, Harald Hardrada died at the battle of Stamford Bridge, outside York. More on the close collaboration between Norway Vikings and Norman rulers below.

Hardrada became extremely rich following his conquests in the East. After spending years there as a mercenary, military commander in Kiev Rus and the commander of the Varangian Guard protecting the East Roman Emperor in Constantinople, Harald Hardrada brought the Orthodox Christian faith and adherence to Norway. [1]

Harald favoured a national church policy, meaning he was suspicious of the Pope and his interventions. This brought him into conflict with the Papacy and he was openly rebuked by Rome for adhering to Eastern traditions.

The story of Harald Hardrada’s life has been kept alive since the 1200s AD by the writings of Snorri Sturluson and other historic sources.

At the battle of Stiklestad in 1033 AD, Hardrada’s beloved brother King Olaf the Saint was slain and Hardrada fled to Kiev, Russia to his kinsmen there.

For many years, Hardrada lived in the East and became the commander of the Varangian guard in Constantinople, defending the East Roman Emperor. As a very wealthy man, he returned to Russia and married the daughter of the leader of Kiev, Elisaveta, who became the queen of Norway for over twenty years.

The harsh King of Norway and his loyal band of brothers

Harald Hardrada and Orthodox Christianity: In 1045, Harald arrived back in Scandinavia. He had left it as a fugitive from the battle of Stiklestad in 1030 AD, as his brother Olav Haraldsson the Saint had died, but returned years later a rich and mighty warlord from his conquests in Constantinople and the East.

He brought with him the knowledge of the Eastern Orthodox Christianity that ruled the Eastern Roman Empire in which Hardrada was the head commander of the Varangian Guard.

“The eleventh–century Norwegian kings Olaf, Magnus, and Harald are
well attested in Latin, Greek, and Anglo–Saxon contemporary sources and there seems
little doubt as to their familial relationship,” writes Sverrir Jacobsson, University of Iceland.

Harald Hardrada and Orthodox Christianity: Harald would cede half his Byzantine gold to Magnus the Good in exchange for the throne of Norway. He essentially bought the throne in gold rather than manpower.

With the treaty enacted, he returned to his homeland and became its King. His wife, Elizaveta, the daughter of the Russian Grand-Prince of Kiev, Yaroslav became Queen of Norway.

It was at this time that Harald Sigurdsson earned the name Hardradi, meaning Harsh-ruler.

He remembered well the fate of his half-brother Olaf, and was determined to not suffer the same betrayal. He would strike at his conspirators before they could strike him.

For instance, Hedeby –the trading jewel of Denmark – saw its bitter end at the hands of Harald’s Norwegians. They not only sacked it, but also burnt it to the ground. Hedeby never recovered. We can understand why Harald’s contemporaries called him the Landwaster.

Harald was one of the finest warriors of his time. He had observed and studied Greco-Roman tactics for years and applied the knowledge to the field.

He drilled his men in a harsh manner, depending on strict discipline. His army moved swiftly and flexibly. King Harald Hardrada was not only a skilled commander on the field, he was also an efficient administrator. His reign saw the implementation of several crucial reforms.

First, he finalized the centralization process by disbanding defiant earls and replacing them with his own, loyal nobles.

This involved a final conclusion to the feud between his brother Olaf Haraldsson the Saint and his enemies. Having consolidated his position as King, dealt with rebels and former enemies, Harald finally had time to enact his new reforms unhindered. He developed Norway’s first independent currency, helping to establish a coin-based economy in Norway.

This was probably one of his most important achievements as it allowed Norwegian merchants to trade internationally much more effectively.

Hardrada opened up new trade routes to Russia and the Byzantine Empire, where he had a network of useful contacts to help propel the trade.

Further, Harald allegedly founded Norway’s current capital, Oslo, where he spent much time, possibly to monitor the trade with the Russians and have quick access to the Kattegat and Skagerrak Northern seas.

Harald favoured a national church policy, meaning he was suspicious of the Pope and his many interventions. However, many Norwegian bishops were loyal to the Pope and were frustrated with his adherence to Orthodox Christianity.

When they confronted him, Harald angrily banned them from his court. This was the beginning of a very complicated relationship between Norway and the Papacy.

The Catholic church and the Orthodox had split around year 1054 AD (The Great Schism) over essentially two subjects: The Orthodox did not agree that one particular spiritual leader and individual, the Pope, should reside above the local bishops. They refused to acknowledge the Papacy in Rome.

The Orthodox also refused to make the priesthood a question of celibacy, priests were to be married and only monks adhere to the celibacy.

As the Christian church was in the midst of the historic split and the Catholic church began its journey separate from the Orthodox at this point, Harald Hardrada sided with the Orthodox view that he had observed in Kiev and Constantinople. So it seems, since he imported Orthodox priests from Russia to come to Norway at the time.

Ancient Faith explains: “Although King Olaf Tryggvasson had accepted baptism at Canterbury in England, the first Christian rulers in Scandinavia were kinsmen of the rulers of Gardarike, or Kiev (The Rus, of course, were not Slavs but Scandinavians, most hailing from Sweden).

King Olaf had himself grown up under the protection of Grand Prince Valdemar (Vladimir), who famously converted the Rus to Christianity in 988.

Norse Christianity was Orthodox in tone and appearance from the beginning, and the last of Norway’s pre-schism Christian kings, Harald Hardrada, was openly rebuked by Rome for adhering to Eastern traditions.

He brought into the Norwegian Church a number of priests and bishops from Novgorod and Gardarike, and also Miklagard (Constantinople), where he had headed the Varangian guard in service of the Byzantine emperor.

The first Christian presence in the Americas, then, was not merely Orthodox in the sense of pre-schism, but had strong ties to the cultural and ecclesiastical traditions of the Orthodox East. This fact can clearly be seen in the interiors of the thousand year old Norwegian stave churches that we see today.”

The close brotherhood between Norway Vikings and Normandy rulers

Hardrada’s much revered brother, the king of Norway who died at Stiklestad in Norway 1030 AD, Olaf Haraldsson had become a saint post mortem. The Olaf cult became massive in Scandinavia with pilgrimages to the place of his burial.

In York, an Olaf church was built in 1050, in Rouen in Normandy more than 20 Olaf churches were built around 1066 AD.

The Viking leader, Olaf Haraldsson the Saint was christened in Rouen in Normandy and baptized there in 1014 by Robert, the Archbishop of Rouen, according to Norman history.

Rollo or Gangerolf from Giske was also baptized int he same cathedral in 915 AD.

This also speaks for the closeness of the Norman rulers to their Viking kinsmen from Norway and Scandinavia. It adds to the likeliness of a coordinated attack between Hardrada and William the Conqueror on England in 1066 AD.

The upcoming final article in the series about Harald Hardrada tells the tale of the Battle of Stamford Bridge and his kinsman Viking, the Norman William the Conqueror and how he conquered England at the Battle of Hastings in 1066 AD.

[1] In Hardrada’s time, people still referred to the Byzantine Empire as the Eastern Roman Empire. The term “Byzantine” is a more modern creation. The Norsemen also called it “Grekerriket”, meaning the Greek Empire.

The Herland Report Scandinavian news site, TV channel on YouTube and Podcasts have millions of readers/viewers yearly. It is a great place to watch interviews and read the articles of leading intellectuals, thought leaders, authors and activists from across the political spectrum. The Herland Report believes in freedom of speech and its editorial policy resides above the traditional Left vs Right paradigm which we believe has lost its relevance and ability to describe the current driving forces in Western politics.
Previous White Americans soon More Demonized Than Jews In Nazi Germany?
Next Muslim leaders to Biden: Stop showering money on corrupt Palestinian leaders!