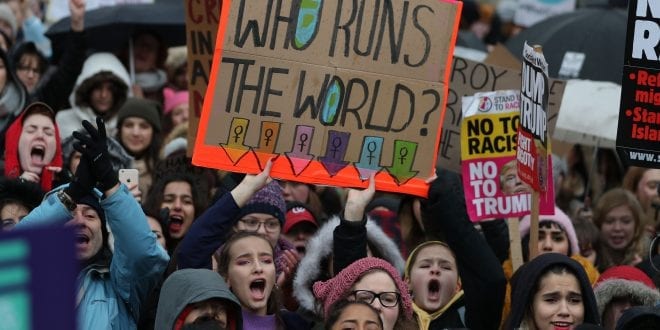 Herland Report: Weak Feminists rule Europe: The madness of feminist governments rule Europe now. Full of feelings and emotional apocalyptic perspectives, many of them are quoted in by gender or Identity Politics’ jibberish, not qualified by competence, experience and leadership.

Women have, according to the aim of the 1960s Western feminism been appointed in almost all important roles.

The New Left feminist belief, claiming female moral superiority, is that “the more women that rule, the better the world will become.”

Well, that notion just died in Europe. Female emotional leadership and a senseless fear of death has spurred the fear of Corona completely out of proportions and push Europe into a horrifying recession.

They seem unable to balancing two elements: Protect the risk groups and at the same time not destroy the economy.

The science of Corona so far

Weak Feminists rule Europe: The panic fear of the Sars Coronavirus COVID-19, not the virus itself, may be the very element that caused the economic crash and will lead to a restructuring of ownership all across the West.

650 000 people die yearly of a regular influenza, according to the WHO. The Covid-19 related deaths are currently below 100 000. The US numbers for yearly deaths due to regular flus are, as CNN reported in 2018 around 80 000 dead. It is currently less than 10 000 Covid-19 deaths. Why does not anyone compare the numbers?

So, why does the media and leaders in the West push such panic over Corona, but not over regular flus that kill hundreds of thousands more?

The UK national emergency plan focus on what now seems like a more sensible reaction, targeting the most endangered, high risk groups which are the elderly, those with respiratory illnesses and so on. The aim is to equip hospitals, avoiding contact, keeping business open, the country now flooding with respiratory masks.

Weak Feminists rule Europe: In Italy, the average age of those dying from Corona is 79.5 years old, 70 % men, most of whom have two or three other serious diagnosis, according to the Norwegian news site, steigan.no. Yet, this might change if the virus spreads out of proportion.

Dr. Vernon Coleman writes that “governments around the world are clearly suffering from mass hysteria. It used to be a problem found mainly among groups of teenage girls. It is now a problem affecting national governments and international organizations.”

“This isn’t anything new, of course. It has always been governments which have created unnecessary scares – and there has often been a hidden agenda. The disease caused by the Corona virus is clearly both unpleasant and potentially dangerous, and sensible precautions are required as they always are.”

“What I am talking about here are the political aspects of the Corona virus. Over the last few decades there have been scares almost every year. And almost every year the establishment has been wrong. They keep picking the wrong things to worry about. And they miss the really big threats,” he adds.

Russia and China not ruled by nerve wrecked feminists

Weak Feminists rule Europe: The geopolitical consequences of a bug, Corona virus, will be detrimental and could change world power play in a less unipolar world order.

If this happens, the neo-Marxist feminism is to blame. It has weakened both men and women for decades, creating defeated victim groups of us all.

The Sun Tsu chess-player and judo master, President of the Russian Federation, Vladimir Putin, is of a vastly different caliber.

The military, KGB rationalists ruling testosterone Russia are oligarchs that come from a mindset that frightened both Napoleon and Hitler. They both felt the fury of Russia, as its people stood together and beat the French armies and the Third Reich.

And Russia under Putin has little debt and may manage as low an oil price as 20 USD pr. barrel. Putin’s no at the OPEC+ meeting implies Russia effectively took a sharp hit at US shale oil which needs around 60 USD pr. barrel, detrimentally plunging the already Corona hit market.

The Russian people is a particular breed, a resilient collectivist group of hard-headed realists who don’t smile unless it is neccessary.

Around 20 million died in the Great War where they took a massive beating, fighting Nazi Germany.  The US lost around 800 000 men.

Russians support their leaders in a unified manner we have not seen for a long time in the West.

Russia has been slammed with all kinds of US sanctions the past decades, causing poverty and extreme distress in the Russian population, low pensions and so on. It is now our turn to suffer economically, since economy is the proxy war zone at stake.

They also have the advantage of knowing how to mentally handle sanctions, with only a few bread rolls in the shelves, while feminist Westerners simply have no clue of what it means to scramble for an apple.

No Nancy Pelosi there, publicly boasting of how she lies and manipulates, tearing up Putin’s speeches like she did with president Trump. (Watch the unbelievable clip here.) Russia is no divided nation on the verge of civil war like the United States.

While Russia has rationally cynical realists at the wheel, we have an army of feminist feelings ruling us. It is rapidly becoming our doom.

Previous Corona causes China to rise as West helplessly battle melt down
Next How China and the Media caused Market Crash by Selling us Fear?