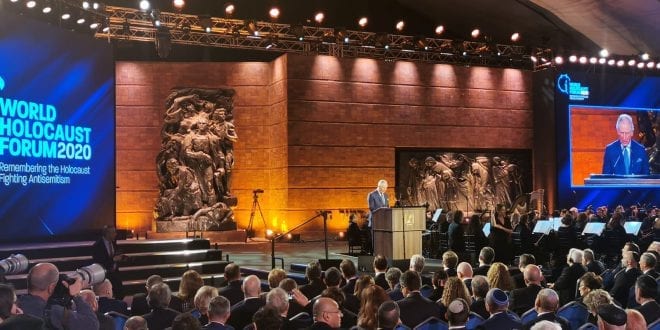 Herland Report: The president of the Russian Federation, Vladimir Putin, US vice president Mike Pence joined the historic ceremony in Jerusalem, the largest ever, commemorating the 75th anniversary of the liberation of the Auschwitz extermination camp and combating anti-Semitism.

More than 1.1 million perished in the systematic killing of unwanted individuals, viewed as enemy of state by the German Nazi structure.

Putin stated: “The crimes committed by the Nazis, their deliberate, planned, as they called it – ‘the final solution to the Jewish question’, dear colleagues, is one of the most tragic and shameful pages of the modern world history.”

“And we all bear the responsibility to make sure that the terrible tragedies of the past war are never repeated, and that the future generations remember the horror of the Holocaust and the death camps, the siege of Leningrad,” the Russian president stressed,” Sputnik reported.

Excerpts below from the speech by HRH The Prince of Wales Charles, at the World Holocaust Forum at Yad Vashem, Jerusalem:

“The magnitude of the genocide that was visited upon the Jewish people defies comprehension and can make those of us who live in the shadow of those indescribable events feel hopelessly inadequate.

The scale of the evil was so great, the impact so profound, that it threatens to obscure the countless individual human stories of tragedy, loss and suffering of which it was comprised.  That is why places like this, and events like this, are so vitally important.”

HRH The Prince of Wales said that hatred and intolerance still lurk in the human heart.

HRH The Prince of Wales Charles continued: For many of you here, and for Jewish people across the globe, those stories are your stories: whether you witnessed and somehow endured the appalling barbarity of the Holocaust personally.

Or whether it touched your lives through the experience of your loved ones, or through the loss of parents, grandparents, uncles, aunts or other family you were never able to know.

But we must never forget that they are also our story: a story of incomprehensible inhumanity, from which all humanity can and must learn.

And so it is of particular significance that we should gather here, in Israel, where so many of those who survived the Holocaust sought and found refuge, and built a new future for themselves and this country.

The lessons of the Holocaust are searingly relevant to this day. Seventy-five years after the Liberation of Auschwitz-Birkenau, hatred and intolerance still lurk in the human heart, still tell new lies, adopt new disguises, and still seek new victims.

All too often, language is used which turns disagreement into dehumanization.  Words are used as badges of shame to mark others as enemies, to brand those who are different as somehow deviant.

All too often, virtue seems to be sought through verbal violence.

All too often, real violence ensues, and acts of unspeakable cruelty are still perpetrated around the world against people for reasons of their religion, their race or their beliefs.

Knowing, as we do, the darkness to which such behaviour leads, we must be vigilant in discerning these ever-changing threats; we must be fearless in confronting falsehoods and resolute in resisting words and acts of violence.

And we must never rest in seeking to create mutual understanding and respect. We must tend the earth of our societies so that the seeds of division cannot take root and grow.

And we must never forget that every human being is be-tselem Elokim, “in the image of God,” and even a single human life is ke-olam malei, “like an entire universe.”

The Holocaust was an appalling Jewish tragedy, but it was also a universal human tragedy, and one which we compound if we do not heed its lessons.

On this day, in this place, and in memory of the millions who perished in the Shoah, let us recommit ourselves to tolerance and respect; and to ensuring that those who lived through this darkness will forever, as in the words of the prophet Isaiah, be “a light unto the nations,” to guide the generations that follow.