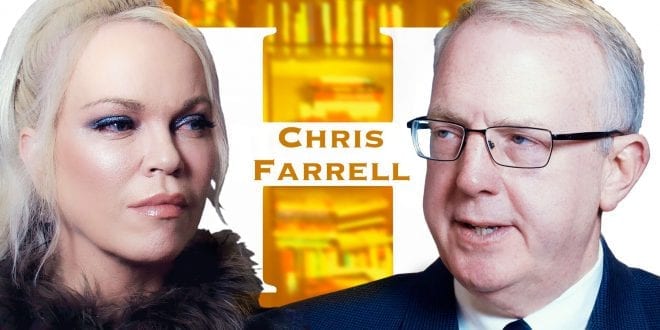 The Herland Report TV: Who is behind the US Drug Epidemic? Historian Hanne Herland discusses the American opioid crisis with Judicial Watch director, Chris Farrell.

“America is facing an incredible crisis over heroin and opioid addiction, – a massive US Drug Epidemic. The deadliest part of that is fentanyl which is a derivative narcotic which is killing people at a rate that no one has seen before,” states Director of Investigations at Judicial Watch, Chris J. Farrell in this interview with The Herland Report.

The United States is engulfed in an unprecedented drug epidemic that we hear little of in the mainstream media.

A startling 27 million or more Americans are on illicit drugs and the Mayo Clinic cites seven out of ten Americans are on prescription drugs. When visiting the US the tragedy is apparent everywhere. Why is so little done to stop it?

Judicial Watch addresses these issues as the leading public watchdog in Washington who sues the government in order to uncover abuse of power among American elites.

The work of Judicial Watch has been remarkable, from uncovering the Benghazi scandal, the Hillary Clinton email scandal, George Soros’ funding of NGOs, the widespread corruption among border patrol and much more.

The Herland Report has several TV interviews with directors from Judicial Watch. Watch them here.

Director at Judicial Watch, Chris J. Farrell: “The US has seventy five thousand deaths a year associated with fentanyl overdoses. It would be equivalent to a Boeing 737 and crash it every day. If we crashed a plane every single day and killed everyone on board, what do you think the transportation administration from that airline would say? Would everyone just shrug and say “just another airplane crash”? No, there would be hysterical reactions. Yet, a plane crash every day equals the number of heroin overdose we now have.”

“It is terribly unpopular to say, but I will say it anyway, that the heroin that gets into the United States come in by very crafty smugglers and it has to do with law enforcement corruption. There’s people that turn a blind eye to that activity and I’m speaking of law enforcement people.”

Chris J. Farrell: Who is behind the US Drug Epidemic? “It is a very sophisticated business, at least 100 billion dollars or more.”

“There is a lot of money to be made by the cartels and they know how to do it. Unfortunately there are people within us law enforcement at all levels.”

“I have communicated with, among many, the Department of Justice with the Senate Judiciary Committee chairman and others. There was a seven year long investigation in El Paso Texas that pointed out all sorts of public corruption. It is a very grave problem, there really needs to be a thorough house cleaning.”

Who is behind the US Drug Epidemic? The Herland Report is a Scandinavian news site, TV channel on YouTube and Podcasts reaching millions yearly.