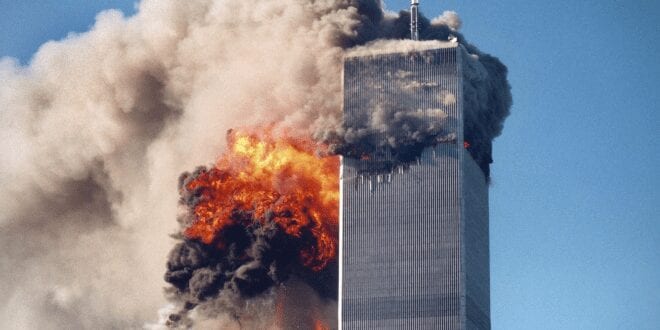 Herland Report: The University of Alaska and Nanjing’ presentation of the findings from a four year investigation into what happened in the collapse of Building 7, World Trade Center, 2001 is revealing.

No planes were flown into this particular building, yet it collapsed just like the airplane-attacked two high risers.

Their findings is that fire did not cause the collapse, but a near simultaneously collapse of every column in the building.

As the article below shows, the 9/11 Board of Fire Commissioners of the Franklin Square and Munson Fire District stated, at the time, that pre-planted explosives —not just airplanes and the ensuing fires—caused the destruction of the three World Trade Center buildings, killing the vast majority of the victims who perished that day.

Dr. Paul Craig Roberts on Herland Report TV: Worst thing that happened to US was fall of Soviet Union.

Dr. Paul C. Roberts writes: A research team at the University of Alaska’s Department of Civil and Environmental Engineering, led by Dr. Leroy Hulsey, Dr. Zhili Quan, and Professor Feng Xiao, Department of Civil Engineering, Nanjing University of Science and Technology, recently released for public comment their findings from a four-year study of the collapse of World Trade Center Building 7 on 9/11, 2001. This is the first scientific investigation of the collapse of the building.

(1) it has taken 18 years to get a real investigation of the destruction of a building blamed on Muslim terrorists.

(2) the only way “near-simultaneous failure of every column in the building” can occur is through controlled demolition.

(3) this remarkable finding is not reported in the presstitute media.

In other words, the study is assigned to the Memory Hole.  This is the way The Matrix operates. This is why you need this website.  The only purpose of print and TV news is to program you so that you insouciantly go along with the agendas of those who rule you.  Those who sit in front of TV news, listen to NPR, or read newspapers are programmed to be mindless automatons.

Whereas, on 9/11, 2001, while operating at the World Trade Center in New York City, firefighter Thomas J. Hetzel, badge #290 of Hook and Ladder Company #1, Franklin Square and Munson Fire Department of New York, was killed in performance of his duties, along with 2,976 other emergency responders and civilians;

Whereas, members of the Franklin Square and Munson Fire Department were called upon to assist in the subsequent rescue and recovery operations and cleanup of the World Trade Center site, afflicting many of them with life-threatening illnesses as a result of breathing the deadly toxins present at the site;

Whereas, the overwhelming evidence presented in said petition demonstrates beyond any doubt that pre-planted explosives and/or incendiaries—not just airplanes and the ensuing fires—caused the destruction of the three World Trade Center buildings, killing the vast majority of the victims who perished that day;

Whereas, the victims of 9/11, their families, the people of New York City, and our nation deserve that every crime related to the attacks of September 11, 2001, be investigated to the fullest and that every person who was responsible face justice;

NOW THEREFORE, BE IT RESOLVED that the Board of Fire Commissioners of the Franklin Square and Munson Fire District fully supports a comprehensive federal grand jury investigation and prosecution of every crime related to the attacks of September 11, 2001, as well as any and all efforts by other government entities to investigate and uncover the full truth surrounding the events of that horrible day.

Previous 2020 was pivotal moment for China: US falling behind in massive crisis
Next U.S. must approach China with humility, its history is 5000 years, wiser and older