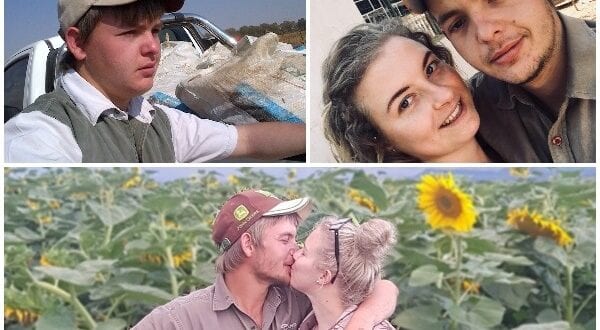 Young Brendan Horner, age 21, was recently savagely beaten, tortured, tied to a post and then murdered on October 1st, 2020.

The bail hearings are in a town called Senekal, in the Free State. Farmers and South Africans of all races have protested these brutal murders, as well as the complicity of the state and the media refusing to call it out for what it is and to protect agriculture in South Africa. Sekwetje Isaiah Mahlamba (32) and Sekola Piet Matlaletsa (44) are to stand trial.

“The two attackers that were arrested for the horrific torture and brutal farm murder of the young farmer, Brendin Horner (21), on the De Rots farm in Paul Roux, in the Free State province of South Africa, will be appearing in the Senekal Magistrate court on Tuesday 6 October 2020. Concerned South Africans are planning to converge on the court at 10:00 for 11:00, in a mass protest against this atrocity as well as against the ongoing violent farm attacks and murders across the country.”

The openly racist against white South Africans who repeatedly has asked for the “killing of whites”, communist leader of the Economic Freedom Fighters Party, led by Julius Malema has reportedly written tweets, urging “Fighters, attack!” have promised to be at the bail hearings as well.

The allegation is that they are calling for civil war in South Africa, in a country where clashes and brutal murders have been happening for many years now.  Malema and his group are the ones who are constantly inciting the “killing of all whites” without much repercussion from the international mainstream media.

The South African police minister, Bheki Cele, has refused to make these attacks priority crimes and recently said that ‘farmers must not complain if they get hurt.’ And the South African president Cyril Ramaphosa has also denied, on a world stage, that theses atrocities exist.

Brendin Horner brutal killing produce D-Day for South Africa, racism against white farmers reach new high: The bail-hearings in Senekal on October 16th may become a stand-off like we have never seen in the country before, some say, and compare the situation to the old days in Europe when the battle lines were drawn on a fall morning with two armies facing each other. Only difference is, only one side reportedly comes armed for war.

Issues such as brutal murders of South Africans from all communities and races has been going on for many years now.

Many of the murders are taking place in rural areas far from police stations, hindering police action before the tragedy is already happening.

Brendin Horner brutal killing produce D-Day for South Africa, racism against white farmers reach new high: As these murders and violence happens not only to white farmers, but to people of all colors, the problem is reportedly often that special interest groups use the murders to further their political aim. This has ended up causing even more hatred between ethnic groups in South Africa, now at a boiling point.

The court hearing in Senekal today is reportedly a clashing point for several of these opposing groups, each with grievances related to these horrifying murders. The allegation is that the Communist group of Julius Malema, the Economic Freedom Fighters Party, openly advocate for the “killing of whites” specifically, which also has been covered by the international media on a number of occasions.

As the South African race war continues, the openly Marxist groups such as that of Malema are advocating for more violence, not less.

The South African state is under criticism for not providing security for its citizen’s rights, property rights and individual rights, the worry is for the future of this country.

South Africa Today writes: “This horrific farm murder, that included extreme violence, savagery and torture, is not an isolated incident, there have been numerous farm attacks and farm murders in South Africa and most have involved the same violence, torture and often include rape. Perpetrators often only steal a phone or a few household items – This is not just ordinary crime – This is terrorism. These attacks against the white minority group in South Africa are also being fueled by black leaders in the country.

The attackers aged 32 and 43 are accused of torturing and eventually killing Horner on the evening of Thursday 1 October 2020. Horner’ body was discovered on Friday morning 2 October 2020, he had been tied by his neck to a pole and had been severely tortured, beaten and strangled to death. A knife was found at the scene.”