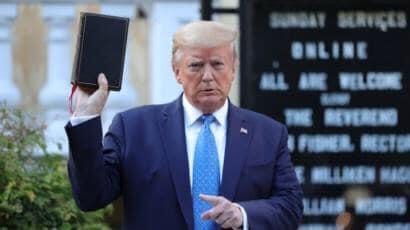 Herland Report: Last week, I wrote about President Trump walking across Pennsylvania Avenue from the White House to inspect the damages from riots at the historic St. John’s Episcopal Church in June, 2020. At the time, he was photographed holding a Bible.

The mainstream media could not stop mocking his choice to hold onto that Bible. But why did Trump hold up the Bible and which are the values described in this book that are so hated in the current Marxist revolution in America?

This week, the son of President Trump, Eric Trump angered the same atheist media for pointing out that “his father saves Christianity” in America. Yahoo writes: “Donald Trump has claimed that Democrats want to “permanently” close all churches in the US, just a few days after his son Eric Trump said that the president “literally” saved Christianity.”

“On Wednesday morning, president Trump responded on Twitter to a video that showed church-goers being arrested for holding a large outdoor service without wearing face masks or abiding by social distancing measures.

The video was captioned by Cliff Maloney, the president of student activism organisation Young Americans for Liberty, who wrote: “If you would have told me in 2019 that we were just 1 year away from Americans being arrested for holding outdoor church services, I would have thought you to be insane. “This is one of the most heartbreaking things I’ve ever seen. Pray for America.”

In response to the video, President Trump tweeted: “Dems want to shut your churches down, permanently. Hope you see what is happening. Vote now!”

Over 80 % among Americans state that they “believe in God”, research showing that only 2.4 % of the world population are atheists – according to Pew Research Forum, ISSP 2008.

The masses believe in God. So, why are religion mockers allowed to control the mainstream narrative and with bullying tactics relentlessly work to belittle the Christian values that once made us great?

As we live in an age of Marxist intolerance, where the mainstream media constantly focus negatively on Christians, we need to remember how groundbreaking the Christian faith really is.

Just to remind everyone about which values in the pool of Western, classical ideals that stem from Christianity, check the list here:

Professor at Yale and Harvard, historian Robert R. Palmer and Joel Colton state in A History of the Modern World that Christian philosophy defined the concept that humanity is inclusive of all people, regardless of race and creed. This represented a new view on the value of human life and was truly revolutionary.

Palmer states that it is simply impossible to exaggerate the importance of Christianity’s influence on Western values.

Without Christianity, we would not have had the principle of equality, which unleashed the revolutionary idea that each man, regardless of class, gender, and race, has a unique value. This is the very Western value that Marxist Race Theory seeks to uproot.

One of the founding values in Christianity is the requirement to love one another, regardless of class, creed and gender.

German philosopher and atheist, Jürgen Habermas states in The Dialectics of Secularization: On Reason and Religion that secular moral political theory has made a grave mistake in excluding Christian ethics, as these have in history demonstrated its ability to motivate individuals to do good.

Somehow, Christianity has been able to motivate the individuals that together compose our society to care more for one another.

These were the precise values that the Christian preacher and civil rights’ icon, Martin Luther King Jr. fought and was martyred for.

Previous The US Election Has Already Been Hijacked and the Winner Decided: ‘We the People’ Lose
Next Brendin Horner brutal killing in Africa, racism against white farmers