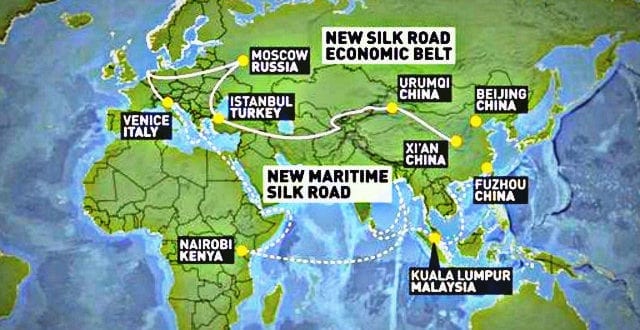 China’s New Silk Road through Syria provokes the US: The Sanctions only help China’s power to grow

Herland Report: “While the US troops on the borders of Russia and Iran are generally considered intimidation/provocation tactics aimed at Moscow and Tehran, the broader reality is that America intends to use its troops as speed-bumps in China’s New Silk Road”, writes Sott.net.

The key element here lies in understanding the geography of China’s massive trade/commerce project, One Belt – One Road, also referred to as the New Silk Road.

A map of the likely final routes of the land and sea trade corridors which China is working to build in cooperation with local nations along the route goes a long way in explaining why the United States is conducting troop exercises, engaging in military conflicts and threatening new military conflicts in key spots along the New Silk Road.

The following map shows the routes of China’s New Silk Road. Each number corresponds to an area where US troops or their allies are either active in a conflict zone or have recently engaged in military exercises.

1. The border between Iraq and Iran.

Kurdish areas in northern Iraq are set to vote in an independence referendum in September of 2017. While it is not clear if the US will officially support the results of the vote which due to a declared boycott of the referendum by the area’s non-Kudish residents will almost certainly be won by nationalists, the US has developed very close ties to Iraqi Kurds over the last decades. The US has likewise supported Iraqi Kurds in their fight against ISIS in northern Iraq.

Many in Iran are growing increasingly suspicious that the US and Israel plan to use their Kurdish allies as a means of waging a proxy war against Iran and its allies. America seems willing to throw out its historically good relationship with Turkey in order to do just that.

America has been fomenting Albanian extremism in Macedonia (aka Former Yugoslav Republic of Macedonia) in an attempt to weaken the position of the sovereignty minded President Gjorge Ivanov. The threats of Albanian nationalists to Skopje threaten the entire statehood of the small Balkan country.

Furthermore, America has been deeply supportive of the Greater Albania project which would see Albanians annex not only parts of Macedonia but also parts of Serbia, Montenegro and Greece. Montenegro’s recent, deeply controversial ascension to NATO could only exacerbate the problem as a fraternal nation to Serbia is now NATO’s newest and smallest member.

All of the sudden, The New Silk Road’s path into southern Europe becomes perilous and highly unstable.

Thousands of NATO troops are currently participating in military exercises in Romania. This comes after the US sold a $3.9 billion Patriot Missile system to the poor European country.
All of a sudden Romania’s seemingly easy route into Europe along the New Silk Road just became dotted with US military hardware and the presence of many NATO troops who will soon be back for more.

The US has recently conducted its biggest ever Black Sea naval exercises with fellow NATO members along with Ukrainian ships.
This further augments America’s presence along the coasts of Romanian, Russia, Ukraine while also being quite close to Turkey’s shores on the southern sands of the Black Sea.

At present, the post-coup regime which rules Ukraine is ardently pro-America. China and Russia’s close alliance could spur the pro-western regime in Kiev into making life deeply difficult for the New Silk Road, even though such moves would be to their own economic detriment.
The Ukrainian regime is well known for making politicized moves which have hurt its own economic interests, severing economic ties with both Russia and the Donbass Republics being two such examples.

In the coming years, many will ask if the fact that the Ukrainian coup of February 2014 and the formal announcement of One Belt – One Road in the Autumn of 2013 were coincidental events in respect of their proximity in time.

NATO troops continue to pour into Poland where they have been largely welcomed by the Polish government. Can masses of NATO troops coexist with Chinese commerce along the New Silk Road? It certainly does not bode well.

Ships on the maritime New Silk Road are set to pass through the Bab-el-Mandeb Strait which links the Gulf of Aden to the Red Sea. Currently, the Strait is under naval blockade from America’s ally Saudi Arabia. The results which have meant a humanitarian disaster for Yemen which is the subject of the Saudi blockade, could also threaten China’s shipping routes to the Red Sea.

The Suez Canal borders the Sinai Peninsula. Much of Sinai is currently home to ISIS troops that the Egyptian armed forces have had difficulty in ridding from their territory.
The presence of ISIS in the Sinai has led many to worry that Israel could invade and occupy Sinai as Israel did between 1967 and 1982.
It is wise to remember that Israel is not on the New Silk Road while Iran, Iraq and Syria are. This reality will not be lost on the leaders in Tel Aviv.
This does not make for smooth sailing along the maritime New Silk Road.

Although none of the conflicts mentioned border China itself, just as sure as China begins to extend the logistical element of its global trade dominance, so too is the United States carefully situating itself in areas designed to make China’s commercial/trade expansion as difficult as possible.