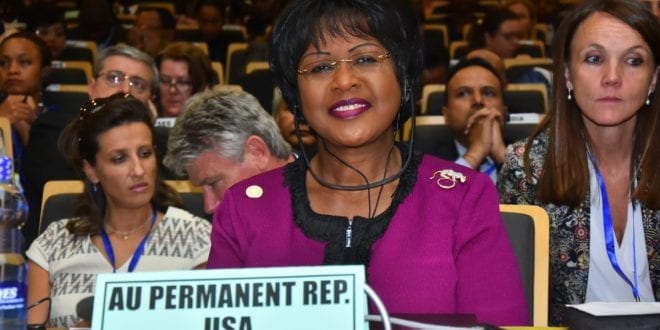 We focus on Africa in the context of the new NATO war on Africa, where NATO/US is engaged in a new Scramble for Africa in the trade war with China, which controls much of the African natural resources.

We ask why African leaders allow this scramble to continue year after year. Does Africa have non-corrupt, responsible leaders who look after the best interests of their own citizens? Or do they mostly look after their own gain and wealth?

Dr. Quao immigrated from Zimbabwe to the US in 1977, worked as a medical doctor for 29 years in Pennsylvania.

She belongs to the African diaspora and is a diplomat, entrepreneur and founder of medical clinics, CEO and founder of Bell Family Medical Centers in the US.

She was the African Union representative to the US from 2017-2019, causing uproar in 2019 by claiming that Africa is still colonized and needs to decouple itself from the economic colonization still intact. She was fired from the African Union reportedly for criticizing France’s still massive role in meddling in African affairs, specifically through the Pact for the Continuation of Colonization.

“How dumb do we have to be? How long has this been going on before we say enough is enough?”

“We, the richest continent on earth, must begin to dictate the prices of our natural resources. That can only happen when we speak with one voice, one Africa speaking with one voice,” she says in an interview with Diaspora Network Television.

“The most dangerous element for Africa today is The Still Colonized African Mind. Until Africa gets to that point where we stand up, proud and tall, as Africans, and understand that our sheer survival begins with our unity, nothing is going to change and the exploitation is going to continue,” says Dr. Arikana Quao.

Dr. Quao states: “What is needed for Africa is to remove the shackles of the mind. Let us decolonize ourselves and eliminate the legacy of slavery. We are a sick and wounded people and we need healing. We are in intensive care. We must accept that as black people we are sick and we need healing. Untill that healing takes place, nothing is going to change.”

“Bring this up, force people to have a serious conversation about image: Who are you? Why are you doing what you are doing? Do you at all care about your children, your grand children and the generations to come?”

“We do not have a choice, this is do or die. I will speak untill every Black person has heard the message and understood what is really going on in Africa.”

“The reason we, as Black people do not respect Africa, we as Black are our own worst enemy, is because we do not know our Africa. We only know what “they” (the white man) wants us to know about Africa.”

“We need to address the problems of Africa from the root, not the superficial level. The dumb things that we do as Black people are mindboggling. Take cocoa: 65 % of the cocoa in the world comes from West Africa, and yet you are not even able to dictate the price of cocoa.”

“Why are we not manufacturing our own hot chocolate? And our own chocolate bars? There is a whole city in Pennsylvania based on industry on cocoa from West Africa.”

“How dumb do we have to be? How long has this been going on before we say enough is enough? We, the richest continent on earth, must begin to dictate the prices of our natural resources. That can only happen when we speak with one voice, one Africa speaking with one voice.”

“That is why people must realize that the African Continent of Free Trade Area is a desisjon that all of us must join hands and support. Its implementation comes July, 2020, and must be a resounding success.”

“We, in the African diaspora, are in a perfect position to pull our funds together and reclaim that which was denied to us when we got our independence, which is economic liberation.”

“Yet, the fear is real. When you look at what the colonizers have done, particularly France, when leaders have tried to pull out of the Pact for the Continuation of Colonization post 1960 independence, the leaders found their heads on the chopping block.”

“There were coups in those countries, and the leaders assassinated. The economies we have in Africa are small economies that cannot survive on their own and are very easy to destabilize.”

“What we want to accomplish is what our pan-African fathers attempted before Independence in the 1960’s, when they came up with the compromise of the Organization of African Unity. Had the Casablanca Group won, when Kwame Nkrumah and the other six countries – Ghana, Guinea, Mali, Tunisia, Egypt and Marocco of “Africa for the Africans, African Union Now”, had we succeeded in doing that document in 1963, Africa would be in a very different place today.”

“The Berlin Conference 1884 (which in many ways formalized the Scramble for Africa) left us in a very bad, losing way. It was a strategy to see to it that Africa and her children are forever defeated and dominated. That strategy remains in place today.”

Dr. Quao has caused quite an uproar, calling Africans “stupid” for allowing the economic exploitation to go on. A weakness is the choice to discuss Africa from a racial perspective, as Africa is a multi-racial continent.

The weakness in her argument is easily seen when switched to Europe: One can only imagine if a European leader/intellectual spoke of the need for “Europe’s white population to stand up for whites and end the domination of other races”.

She states that “Black people” must stand up for “Black people” so that Africa may unite as one. But in Africa, there are black, white, mulattos and a variety of ethnic groups with equally a variety of skin color.  You also have the generations with Indian origin who came to the continent over a hundred years ago.

“The Mugabe card” has highly hurt Zimbabwe, Dr. Quao’s country of origin. Expelling all “whites” from Zimbabwe did not create the much needed wealth. Neither in Zimbabwe nor in current day, ANC South Africa is racism the solution. Nor in Europe, for that matter.

The reason is simple: Right and wrong does not correspond to the color of someone’s skin. There are horribly corrupt Africans and there are equally corrupt Europeans. There are honest and true Africans just as there are Caucasian white Americans.

This is the deep flaw of racial orientation, which has been part of the curse of ethnically divided Africa for so long. In this sense, Dr. Quao continues the very race-oriented speech that has led to many a genocide in Africa. Just remember Rwanda.

Precisely because Africa is so thoroughly divided according to tribes, the ethnic card has always been an instigator to the unleashing of mass murder on the continent. A much better remedy would be unity regardless of skin color.

To unite across race for the betterment of Africa might be an even better strategy. There are White Africans who have lived on the continent longer than the Africans have been in America, what about them?

Picking the race card might be Identity Politics’ trendy in Dr. Quao’s America today, but not the best idea. Again, to switch to the European perspective: Would it solve Europe’s problems if all the Indians were kicked out? If all the Africans in Europe were sent back to Africa? It may be argued that Dr. Quao’s arguments borders on the same argument.

Another flaw is Dr. Quao almost solely pointing to the exploitation of the “White man” in Africa. This has been done for many years and it is over 70 years since African nations got their independence.

So, where is her thorough discussion of the flaws in current African leaders? The rampant corruption is the very element that destroys Africa, as it is remarkably easy to simply bring a suitcase full of money. Just ask the Chinese.

It is not a secret that many African leaders are billionaires from running politics. Who can create stability in a country of its political leaders steadily are millionaires from exploiting state funds?

Still, the honorable Dr. Quao has quite a few points. She is speaking safely from the distance of living in America, hoping to make changes for the African continent. And she joins quite a number of African intellectuals who now speak up, hoping for Africa to be controlled by Africans, hopefully in the near future.