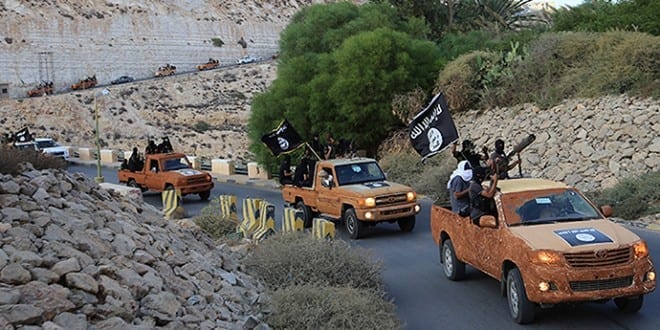 Herland Report: ISIS plans to invade Europe: ISIS’ plans to conquer Europe via Libya have been revealed in letters seen by an anti-terrorism group. Owing to its perfect location on the continental doorstep, the terrorists plan to ferry fighters from North Africa across the Mediterranean, RT reports. (Photo: Reuters)

The plans, analyzed by anti-terrorism British think tank Quilliam, outline a strategy to illegally ferry fighters across the sea from Libya into southern Europe, into ports such as Italy’s southernmost island of Lampedusa, less than 300 miles (483km) away.

Libya “has a long coast and looks upon the southern Crusader states, which can be reached with ease by even a rudimentary boat,” an Islamic State (IS, formerly ISIS/ISIL) propagandist says in the letters seen byQuilliam, according to the Telegraph.

That information originates from an IS supporter using the moniker Abu Ibrahim al-Libim. The propagandist is believed to be a strong force in IS recruitment online, with a focus on Libya.

The Telegraph could not independently confirm his identity, but the online recruiter is believed by analysts to be a great inspirer of troops and is widely-read.

“Twitter has shut down Libim’s accounts several times and each time he starts a new one he gets thousands of followers very quickly, which is typical of an influential [IS] affiliate,” Charlie Winter, researcher for the QuilliamFoundation, told the newspaper.

The plans Libim reveals revolve around posing as illegal immigrants, to then start an all-out attack on southern Europe by seeding chaos and bloodshed. The terrorists reportedly hope to flood Libya with other fighters from Syria and Iraq, with a whole army at the ready to invade.

“We will conquer Rome, by Allah’s permission,” he says in a Sunday video depicting the beheading of 21 Egyptian Christian guest workers, the video that led to Egypt organizing a bombing campaign on militant positions in Libya. He also describes the country as having “immense potential” for the terrorist group, while making references to the spoils of war left after the ouster of Colonel Muammar Gaddafi in 2011 – tons of weapons, ammunition and oil.

The onus would appear to be on the West to do something security-wise – especially in places like Italy. But that country is already facing a fierce backlash from UN’s refugee agency, the UNHCR, for seemingly caring more about implementing stringent security policies on immigrants, as opposed to caring for people’s safety when they drown just off the coast trying to make it to a better life.

More than 207,000 people have attempted the crossing to Europe over the Mediterranean Sea this year – “almost three times the previous known high of about 70,000 in 2011,” the UN pointed out. That year saw a spike on account of the Libyan civil war.