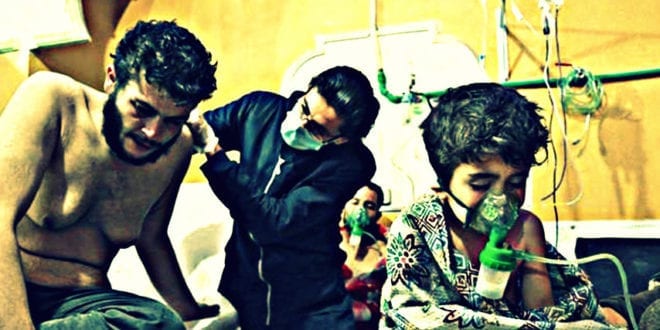 Herland Report: We have for long stated that accusations of chemical attacks would probably be launched from rebels in Syria some time soon in order to provoke an escalation in Western involvement in Syria.

Now it happened as expected in Douma, East Ghouta on April 7th, 2018. Yet, reports from the ground state that the “chemical attack” is fake news, and that no such attack took place and no chemical residues are so far found in Douma. What is true or not, remains to be examined.

The Herland Report has also written about the peculiar Skripal-case, in which both Theresa May and Boris Johnson accused Russia although the investigation is not finished and one obviously may not know so far who poisoned Skripal.

Neither has any evidence been since been produced, the investigation still ongoing, still allegations flow to such a level that it seems that manufacturing public consent for another invasion in Syria is the case.

It could easily be Russians involved, we simply are asking for evidence. As we stated in our article on the Skripal Circus, the British used to hide their strategy better, back in the good, old days. Now it’s all out in the open.

We have also pointed out the suspiciously sudden Free Syrian Army (FSA) marches in London with slogans such as “Free Syria” and not Black Lives Matter, but “Syrian Lives Matters Too”.

Their banners in London conspicuously stating “The Chemical Brothers” with pictures of Assad and Putin, as to warn of the coming allegations that now “cause Trump to remain in Syria”.

This happened just as the Skripal case was unravelling in the media. It all smells fishy. The same script is used again and again now. It’s just too coordinated.

The Russian and official Syrian explanation differs dramatically. And again, no one has yet examined what actually happened in Douma, East Ghouta and who is behind it, yet the accusations are rampant, just as in the Skripal circus:

The Russian Foreign Ministry said that the allegations about a chemical attack in Eastern Ghouta are mere provocations that seek to protect terrorists and justify attacking Syria.

In a statement on Sunday, the Ministry said that Moscow had warned about such provocations that seek to protect terrorists and justify potential attacks on Syria from foreign sides. The Ministry said that these allegations are based on testimonies by the so-called “White Helmets” and groups based in Britain and the United States, and those sides have been proven to collude with terrorists.

The official Syrian version: A source at Foreign and Expatriates Ministry said on Sunday that allegations of using chemical weapons have become an unconvincing stereotype, except for some countries which traffic with the blood of civilians and support terrorism in Syria.

Every time the Syrian Arab Army advances in combatting terrorism, the allegations of using chemical weapons emerge as a pretext to prolong the presence of terrorists in Douma, the source added. “The pretext of using chemicals in Ghouta was pre-planned and there is documented and confirmed information about this against which the Syrian state has previously warned,” the source said.

It remains to be seen whether a renewed Western attack in Syria will come to aid to the pockets of the Syrian Al Qaida fighters, Jaysh al-Islam and various Western aided groups such as the FSA and others, left in the Idlib area and quite finished in East Ghouta, where they seemingly and most conspicuously are joined by quite a large number of Western NGO’s. The revealing collage is sampled by the Norwegian journalist, Eva Thomassen.