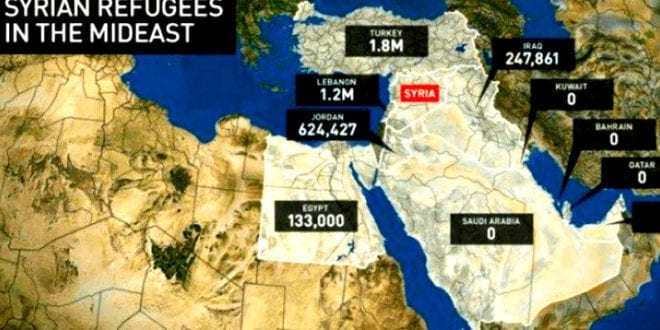 “Western Arab allies refuse to take Syrian refugees. Between 10 and 12 million Syrians have been displaced by the bloody civil war raging in their country.

Most still remain within Syria’s borders, but around four million have fled over the borders into neighbouring countries, mostly Turkey Jordan and Lebanon, and beyond,” reports Jews News.

Lebanon, which has 1.1 million Syrian refugees, shut her borders to the Syrians in June of last year. Jordan, host to another 630,000, followed suit in August last year, preventing more Syrians from abandoning their country.

By early August 2015, European states had received nearly 350,000 asylum applications from Syrians, nearly a third of whom applied to Germany for asylum.

Hungary and Austria have received close to 19,000 applications each although that figure is likely to rise, while the UK is processing 7,030 applications, according to the United Nations Refugee Agency (UNHCR).

He said: “The records of Gulf countries is absolutely appalling, in terms of actually showing compassion and sharing the responsibility of this crisis… It is a disgrace.”

None of the Gulf States signed the 1951 Refugee Convention, which legally defines a refugee as “A person who owing to a well-founded fea

Yet amidst cries for Europe to do more, it has transpired that of the five wealthiest countries on the Arabian Peninsula, that is, Saudi Arabia, UAE, Qatar, Kuwait and Bahrain, not one has taken in a single refugee from Syria.

The Herland Report Scandinavian news site, TV channel on YouTube and Podcasts have millions of readers/viewers yearly. It is a great place to watch interviews and read the articles of leading intellectuals, thought leaders, authors and activists from across the political spectrum. The Herland Report believes in freedom of speech and its editorial policy resides above the traditional Left vs Right paradigm which we believe has lost its relevance and ability to describe the current driving forces in Western politics.
Previous Putin’s foreign policy made him a hero, defending Conservative national sovereignty
Next Dishonest CNN says Russia Gate is not true, American public is stupid