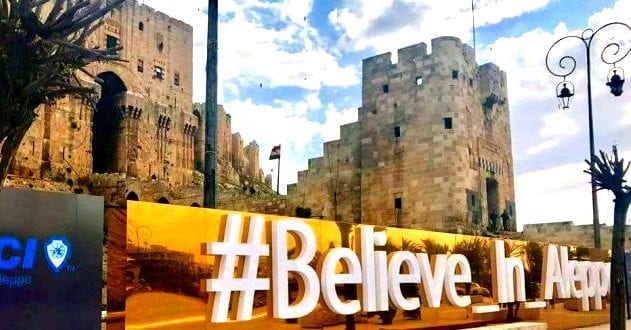 Yet, the White Helmets do not typically put others first, at least according to witnesses, and in Aleppo had a reputation for robbing the houses they entered and the people they helped.

Not that they helped ordinary citizens, for the most part, since it appears their main practical role was to provide support to the fighters.

Their filmed rescues are not all necessarily genuine. Nor is it true that they assembled as a group spontaneously.

This was the work of British military man James Le Mesurier, with funding from Western governments, notably Britain and America. He organised training for them in Turkey, writes professor Tim Hayward, featured at The Herland Report.

In the wake of Netflix’s Oscar winning The White Helmets comes the Sundance Festival Grand Jury Prize winning Last Men of Aleppo. According to early reviews, audiences leave screenings with a desperate feeling that something ought to be done, but with a sense of helplessness about not knowing what.[1]

While that is very understandable, there are some things we can know if we really want to, even though the film does not reveal them.

First, in case it is true that among audiences are people who wish there was something they could do to just make the bombing in Aleppo stop, I would mention that it has stopped. It stopped before Christmas 2016.

The siege of Aleppo ended, and the citizens who had been trapped there, essentially as human shields, were able to leave.

Most went to the Western part of the town that had remained under government control.[2]

The fighters who had been in control of the eastern quarters were given amnesty and left town in green buses laid on by the Syrian government.

They were allowed to take their handheld weapons. The White Helmets went with them to Idlib, although some may have gone to Turkey (where their video clips were edited into this new film).

Since their departure, law and order has been restored across the whole of Aleppo. The eastern part is no longer bombed.

Nor does it any longer experience the kidnappings, rape, murder, crucifixion, torture, sexual exploitation and organ trafficking that had been permitted and perpetrated by the “rebels”.

It also no longer serves as the launch pad for mortars and hell cannon fired into the civilian population in the Western part of town.[3]

Viewers of the film may find this puzzling news, given they’ll have heard ‘the White Helmets’ collective insistence that they’ll never abandon Aleppo’ and that ‘Aleppo will always be their home’.[4]

The fact is no White Helmets operate in Aleppo now, just as none did before the “rebels” seized its Eastern part. Incidentally, the real Syrian Civil Defence volunteers, who have operated in areas under legitimate government since 1953, wear red helmets.[5]

Several further facts about the White Helmets are not much publicised in the news media or these films. One is that they are not actually volunteers in the usual sense, for they are paid.

The funding comes from foreign governments, notably UK and USA (as explained, respectively, by Boris Johnson and Mark Toner).

The White Helmets do not typically put others first, at least according to witnesses, and in Aleppo had a reputation for robbing the houses they entered and the people they helped.[6]

Not that they helped ordinary citizens, for the most part, since it appears their main practical role was to provide support to the fighters.[7]Their filmed rescues are not all necessarily genuine.[8]

Nor is it true that they assembled as a group spontaneously. This was the work of British military man James Le Mesurier, with funding from Western governments, notably Britain and America. He organised training for them in Turkey.

Among the White Helmets are fighters who, despite what we are told, can be seen with weapons.[9] They are also accessories at executions.[10]

A beauty of film is that it can conjure a world of pure imagination. When this potent capacity is applied in the making of a documentary it can make the material more compelling. It can, of course, also serve to manipulate and distort the evidence it presents.

The film does not aspire to help audiences understand better “what they can do” about the terrible situation in Syria.

It tends to reinforce the received wisdom about the supposed heroes of Aleppo.

But anybody wondering how truthful it is will want to review that received wisdom, and perhaps consider some of the now numerous critical accounts of the role the White Helmets have actually been playing in the Syrian war.

One might then also try to understand what the deep motivation is for Western media and even film industry award institutions to be involved in glorifying people who are at a maximum of one degree of separation from active terrorists.

By thinking about this, one may better understand – unswayed by the artful manipulations of a motion picture – exactly what one should really be worrying about.

The West’s support for regime change wars has brought devastation to whole countries. Think about Iraq or Libya as well as Syria.

It has brought refugees. It has involved allowing British citizens freely to train for jihad.

It has allowed them to fight against legitimate governments abroad and return home. We have seen them here in Britain. We saw them in Manchester recently, and on Tower Bridge. I fear we may see more.

We live in a time, I believe, when it is vital to be challenging the assumptions that support the escalation of conflicts.

While the message of White Helmets films may seem to be about the need for peace and humanity, their underlying function – and the reason for their being funded by hawkish governments – is to reinforce the need for intervention to overthrow another country’s government.

That is why I think films like this are not really best described as documentaries. For what the White Helmets are, as John Pilger has succinctly observed, is ‘a complete propaganda construct’.[11]

[1] ‘I suspect it’s the filmmakers’ wish that once those initial feelings ebb, moviegoers will ask what they can do to help. This picture doesn’t offer hope; its aim is to compel us to create some.’ Glenn Kenny in the New York Times 2 May 2017 https://www.nytimes.com/2017/05/02/movies/last-men-in-aleppo-review.html?_r=0

[2] This is recorded by Aron Lund in an article that is by no means sympathetic to Assad’s government:

[3] You would not know it from this film, or the Netflix one, or the Western media more generally, but the Western part of Aleppo is far more populous than the eastern part and has remained functioning – despite the incoming shells from the “rebel” areas – throughout the war.

[5] http://21stcenturywire.com/2017/04/02/the-real-syria-civil-defence-saving-real-syrians-not-oscar-winning-white-helmets-saving-al-qaeda/ This resource gives detailed information about the real Syrian civil defence as well as some further insight into operations by the White Helmets.

[7] Abu Jaber Al-Sheikh, the leader of Hay’at Tahreer Al-Sham (Al-Qaeda in Syria) thanks the White Helmets and calls them “the hidden soldiers of the revolution”. This was part of his speech commemorating the 6th anniversary of the Jihadist insurgency in Syria:  See also the evidence on the ground in Eastern Aleppo:

[8] We cannot be certain exactly what is and what is not staged in White Helmets films, but we can be certain of their capacity to make convincing fakes for the camera, since they demonstrated it with their notorious Mannequin Challenge video: .

[10] Evidence can be found on social media but I have opted not to link to it here since it is disturbingly graphic.

[11] https://www.youtube.com/watch?v=X27B0yuazGo.  Since Pilger is known to be on the political left, it is interesting to note that a similarly critical view of the White Helmets is given by someone usually regarded as on the political right, Peter Hitchens:

Tim Hayward is a Professor of Environmental Political Theory at Edinburgh University, founding Director of the Just World Institute and the Ethics Forum. He is a founding member of the Britain and Ireland Association for Political Thought. Dr. Hayward’s articles appear on The Scandinavian Herland Report, curtecy of Dr. Hayward.