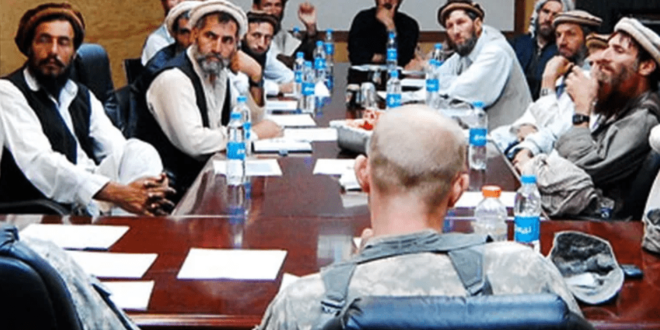 Why America Failed to ‘Win Hearts’ in Afghanistan: Oblivious of Culture, thought only of Materialism

Herland Report: Why America Failed in Afghanistan: In many ways, arrogant leftist thinking—indeed, the leftist paradigm in its entirety—led to the disaster that is Afghanistan.

Many, especially those of Afghan background, have made this clear in the aftermath of America’s withdrawal.

Consider the words of Baktash Ahadi, an Afghan-American who served as an interpreter for the U.S. military for years:

How could Afghanistan have collapsed so quickly? As a former combat interpreter who served alongside U.S. and Afghan Special Operations forces, I can tell you part of the answer — one that’s been missing from the conversation: culture….

When comparing the Taliban with the United States and its Western allies, the vast majority of Afghans have always viewed the Taliban as the lesser of two evils.

To many Americans, that may seem an outlandish claim. But the Americans also went straight to building roads, schools and governing institutions — in an effort to ‘win hearts and minds’ — without first figuring out what values animate those hearts and what ideas fill those minds. We thus wound up acting in ways that would ultimately alienate everyday Afghans.

In other words, because they were oblivious to the importance of culture and convinced that only the material matters —roads, schools, buildings, etc. — American leadership in Afghanistan failed, writes Raymond Ibrahim is an author and Middle East and Islam specialist.  His books include Sword and Scimitar, Crucified Again: Exposing Islam’s New War on Christians, and The Al Qaeda Reader.

Why America Failed in Afghanistan: Unfortunately, this failure far transcends the few; to increasing numbers of Westerners in general, the word “culture” often conjures at most physical, surface differences—“exotic” food or dress—nothing essential.

In reality, cultures consist of entire and distinct worldviews with their own unique sets of rights and wrongs, often rooted in a religion or philosophy.

Cultures bring much more to your town than, say, the convenience of having Indian cuisine down the street.  As European historian Hilaire Belloc once explained:

Cultures spring from religions; ultimately the vital force which maintains any culture is its philosophy, its attitude toward the universe; the decay of a religion involves the decay of the culture corresponding to it—we see that most clearly in the breakdown of Christendom today.

Why America Failed: Looked at another way, all values prized by the modern West—religious freedom, tolerance, gender equality, monogamy—did not develop in a vacuum but are rather inextricably rooted to Judeo-Christian principles that, over the course of some two millennia, have had a profound influence on Western epistemology, society, and, of course, culture.

It’s not for nothing, nor is it a “coincidence” of history, that these values were born and nourished in Western—not Islamic, Buddhist, Hindu, Confucian, or pagan—nations.

Even so, and due to relativistic type thinking, most Western people assume that all of the aforementioned values are somehow “innate” to all peoples; that, given the proper material circumstances—new roads, schools, health care, prosperity, etc.—all peoples will become just like them, secular materialists (irrespective of their Asian or African cultures/religions, which, again, are seen as limited to food, dress, rituals, ceremonies, and the like).

The great irony is that such thinking is extremely arrogant and ethnocentric—two things that leftists always warn against yet are most guilty of doing.

While the conservative acknowledges, for example, that Islam has its own principles, the liberal ignores these, believing instead that Muslims “are just like us.”

This view, which arrogantly brushes aside Islam’s role in the Muslim’s life, doesn’t seem ethnocentric because the “us” is not believed to be particular (Western or Christian) but universal.

In short, growing numbers of Western people see themselves as the culmination of human history—“progressive” thinkers who have left all cultural and religious baggage behind—and are convinced that all the peoples of the world are destined to follow their lead and develop like the West, which is no longer seen as a distinct culture but rather the end point of all cultures (given the proper, often material, circumstances).

Thus, and returning to the question of Afghanistan, Western leadership saw its tribal Muslims as embryonic Westerners: whatever their religion or culture dictated, surely these were skin deep; given the proper circumstances, surely the Afghan people’s nascent or innate appreciation for a division between religion and state, feminism, pluralism, and tolerance would eventually take root and blossom.

Put differently, Afghanis (and later Iraqis) were made “in our image” (except, of course, we forget the spiritual and intellectual—in a word, cultural—roots of “our image”).

Why America Failed: Always overlooked in this arrogant calculus is that Muslims have their own unique and ancient worldview and set of principles—their own culture—which in turn prompt behavior that is deemed “radical” by Western (falsely assumed to be “universal”) standards.

It was this blind spot to culture that proved disastrous in Afghanistan and, no doubt, will continue to prove disastrous for all such future ventures that ignore the metaphysical and focus only on the physical.

Raymond Ibrahim is an author and Middle East and Islam specialist.  His books include Sword and Scimitar, Crucified Again: Exposing Islam’s New War on Christians, and The Al Qaeda Reader. Ibrahim’s writings have appeared in the New York Times, CNN, LA Times, Fox News, Financial Times, Jerusalem Post, New York Times, United Press International, USA Today, Washington Post, Washington Times and others. He has been translated into dozens of languages. Ibrahim is a Shillman Fellow at the David Horowitz Freedom Center, a Judith Rosen Friedman Fellow at the Middle East Forum, and a Distinguished Senior Fellow at the Gatestone Institute.