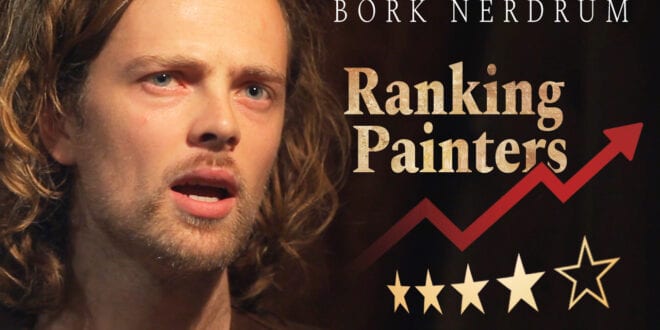 Herland Report: This December, Bork Nerdrum is publishing a comprehensive list of the 59 best living painters in the world in the Norwegian culture magazine Sivilisasjonen.

He joins Jan-Ove Tuv in the 24th episode of The Cave of Apelles, the program of which he also is the producer, to discuss the importance of bringing back objective criteria to culture.

And if you take away competition, then we are all just perfect the way we are, says Bork S. Nerdrum.

Can quality be measured?

Bork Nerdrum Criteria for Best Painters in the World – Cave of Apelles, Nerdrum School: According to Bork S. Nerdrum, the answer is yes. Not only does he think quality can be measured, but also that it ought to be measured. The alternative to ranking culture according to objective criteria, he argues, is iconoclasm, cancel-culture, and quality measured by gender, race, and political affiliation.

When making the list of the 59 best living painters in the world, Bork Nerdrum regarded entertainment as the highest virtue.

– As a painter, you should entertain the audience. Not only deep contemplation, but you should evoke the emotions of pity and fear, he says.

The principle of evoking pity and fear is taken from the philosopher Aristotle’s Poetics, which Nerdrum admits has been of great influence for the list.

Bork S. Nerdrum has used four criteria for measuring the quality of the paintings. In each criteria, the painter can receive up to five points. The painters are thereby ranked according to how many total points they receive.

The four criterias Nerdrum has used to rate the painters are: Execution, composition, drama, and timelessness.

On the shelf for the episode of Cave of Apelles are the top three paintings on the list: The Golden Cape by Odd Nerdrum, The Outcast by Sebastian Salvo, and The Passenger by Bruno Passos.

Bork S Nerdrum explains what they all have in common:

– They are well executed, they are quite well composed, and they are all quite timeless. But most importantly, they express a lot of drama, he says and adds that he talks about the ancient Greek definition of drama, meaning men in action.

Another element of Bork S. Nerdrum’s list is a graph that measures the luminance of the painting. Using the graph as a measuring tool was discovered by the painter Luke Hillestad.

Nerdrum explains that it is called a “channel histogram”, and can be found in most photo editing softwares.

– Does it measure the hierarchy of values, asks Tuv.

– If you have strong, separate colors, you will not get a good graph. If you get a lot of “mountains” in the graph, it is a bad painting. The graph should be as smooth as possible. That means that you have much variation in the luminance and in the colors. It shows whether the painting has been thoroughly worked with, says Nerdrum.

The most perfect graph Bork S. Nerdrum has ever come across is the graph for Titian’s painting The Flaying of Marsyas.

– Titian was the idol for this list. His goal was to display the past, present, and the future in one painting, says Nerdrum.

Bork Nerdrum Criteria for Best Painters in the World – Cave of Apelles, Nerdrum School:  Jan-Ove Tuv continues the discussion about the main criteria for the list: creating drama, or evoking pity and fear. Bork Nerdrum explains that when making the list, he asked himself the question: “Does this painting evoke the feeling of pity and fear within me?”

What, then, about paintings with a lot of action, but no story? Tuv plays the Devil’s advocate.

– A lot of Baroque paintings are good examples of too much going on, but too little actually going on. Aristotle talks about in the Poetics that you have to narrow it down to one problem that needs to be solved, says Nerdrum.

He also explains why there are rather few portraits on the list:

– Entertainment includes that you can see what is happening, and what is going to happen. This is hard to do with a portrait.

Nerdrum does not expect the list to be praised by all. He welcomes critique with open arms.

– People are going to critique it, and with good reason. When you are dealing with objective criteria, critique is good. This is an early phase of the list. I am trying to establish a system that works, that can actually create a new renaissance. Critique, like Carl Korsnes mentioned in a previous conversation, is the best thing when dealing with the scientific method – because you can improve the method, says Bork S. Nerdrum.

The list is also meant to lay a foundation for improvement within the field of painting. The painters are not ranked according to originality, political message, or any other obscure value — but according to skill and the ability to tell a story.

– That’s why it is so important to have objective criteria. You’re going to have some sort of criteria anyways, and if it is not objective, it will be some kind of absurd criteria.

Previous Apocalypse Never: Why Environmental Alarmism Hurts Us All
Next The US Banana Republic Mess: Voter fraud, Dominion Voting System