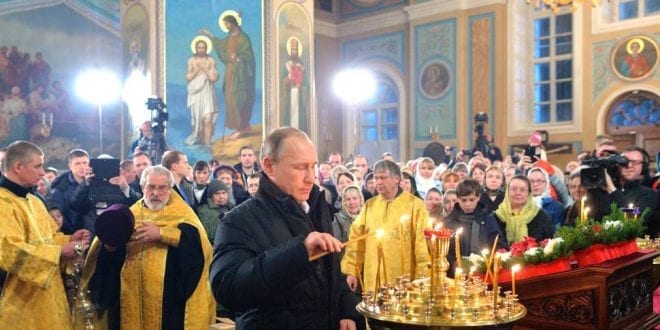 Herland Report: In the eighteen years since the faction behind President Putin came to power, the country has been transformed in a way that Western neo-liberalism would call “regressive.”

The government and its leaders there speak plainly about the need for morality and virtue, much stronger terms than “ethics” and “principles”.

They speak plainly about the need for thriving families and communities. They have mostly practiced a kind of restraint that in fact appears to be quite the opposite to what the spaghetti-western propaganda media would tell you.

To replace the now defunct Leninism, the Russian government has turned back to its cultural roots in Eastern Orthodoxy, trying to fill a spiritual void left empty after 70 years of Communism and ten years of abuse by elements in the West. Since then, 25,000 churches have been built or restored in Russia, writes Kelly Em at Giza Death Star.

In the state of the union address in 2013, Mr. Putin said (as reported in the Telegraph):

“This destruction of traditional values from above not only entails negative consequences for society, but is also inherently anti-democratic because it is based on an abstract notion and runs counter to the will of the majority of people,” Mr Putin said, adding there could be no benefit for society for treating “good and evil” equally.

The rise of Christianity in Russia under Putin

An article in The National Interest underscores the point:

“…in today’s Russia the Orthodox Church is closely partnered with the state. It provides both intellectual and moral support to many state policies, not because it has to, but because it wants to. The current moral framework of Russian foreign policy is, indeed, its view, which the Church promotes because it is convinced that creating a “congenial international order” will assist it in its threefold salvific mission—to save individual souls, to save all national cultures that have been baptized into Chris

Donald Trump and the focus on Christian values

Since president Trump has come to power, he has moved a great distance closer to Christianity than expected.  His wife, on his first trip after he took office, read (video:) The Lord’s Prayer before he spoke.

He picked Pentecostal Christian Mike Pence as his running mate, held an anti-abortion vigil on the White House lawn, reportedly prays every morning with the team in the oval office, attacks the base content of Hollywood media elites and calls out the so-called “perverts.”  On CBN in 2015, he said:

“…As you know, I am Protestant. I am Presbyterian. Most people don’t know that. They have no idea. I’m proud of it…  One of the things I learned this weekend being in Iowa, I met with a lot of national security experts and everything else, that if you’re a Christian living in Syria you can’t come into this country.

Yet, if you are a Muslim living in Syria, who are not under attack, they can come in.  But we have Christians being beheaded all over the world by ISIS. In Syria and in Iraq, in particular, those Christians can’t come into this country.  You say what you want but this is really something. That’s a lack of respect for us…If you are from Europe and you’re a Christian you can’t come in…meaning it’s almost impossible.   So you tell me about religious liberty and freedom.

The Christians are being treated horribly because we have nobody to represent the Christians.”

What I mean is, as the mainstream Christians in the US are waking up to the dumbed-down culture they see every day, it seems that with the sudden emphasis on traditional American values being led from the White House, that the US might be on a path to repeat what was done in Russia: restore the rule of law, replace ethics with morality, replace goodness with virtue, reestablish the arts, and a healthy emphasis on the individual, the family and community.

It is a tall order that will take at least two generations to be enacted here if the effort succeeds.  And because this is Washington, it has to be good for business as well.

So next time someone yells “Russian Collusion” in a crowded theatre, stop and think that maybe, the two thousand-year Christian ethos and its reestablishment in the West might be what they mean by it.

One hundred and twenty-one years ago, President William McKinley was gunned down two months after it became clear that he intended to build a railroad between Moscow and New York and eschew the “Special Relationship” with the banksters of Britain.

The subject – “Russian collusion!” – was promptly dropped.  An alignment of Russia and America, which first arose when the Russians saved the United States from Europe during the Civil War by sailing their fleets into San Francisco and New York, has been on the menu for a long time.  Who has apparently been standing in the way?

As evidence for the effort towards the prevention of a natural alliance of “Christian civilizational” interests inter alia the US and Russian societies, consider the article that Dr. Farrell referenced the other day on this site. Here is the link for your convenience:

TyranoSauros attacked the new Italian government for pledging to curb the insanity of the EU, which has been running a “bureaucratic Islamic insurgency” against the cultures of nearly every European state while asset stripping the smaller EU countries. He blamed Russian Collusion for the desire of the Italians to chart their own destiny.

“Soros said he is, “Concerned about the proximity of the new government with Russia, if Moscow has financed Salvini, the Italians should know it”.

Yes, Soros is using, once again, the usual Russian Collusion conspiracy theory, a classic of the left-wing globalists on both sides of the Atlantic.

The Northern League’s leader, Matteo Salvini, now the Ministry of the Interior, replied immediately with strong criticism towards Soros and the Festival saying, “Never had any money from Russia it’s a shame to invite such a unscrupulous speculator”.

However, George Soros, also added strong criticism towards Donald J. Trump, saying that, “Trump is a threat to the world including America”,hoping he will be defeated in the U.S. midterm elections, stating incredibly that Trump, who is making the U.S. economy great again, “does not understand the basic elements of economy”.

We hope Italy’s new government will act quickly to declare that Soros’ activities are no longer welcome in Italy.”

It seems to me that behind all this a civilizational resonance has been struck; an old chord that suggests Christian civilization and its outgrowths: respect for free will and the individual, freedom of speech, of association, of true representative government, of worship, of protection against the excesses of state power, against compulsion; which, not ironically, is everything the EU and the American left has come to represent. Their views are analogous to a certain group in power in Germany before the mid-century mark.