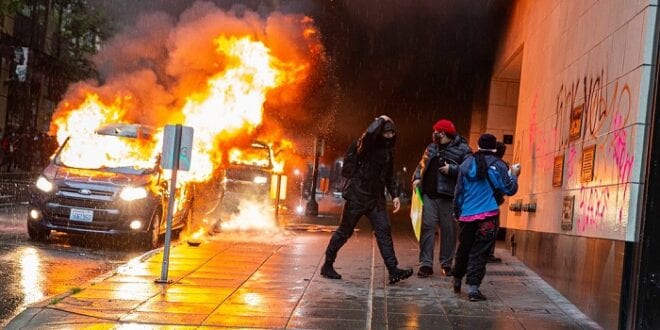 Herland Report: Almost 100 % of riots destroying property is done by Black Lives Matter, study shows: The Black Lives Matter (BLM) movement accounts for nearly 100 percent (91%) of riots throughout the country, according to the latest study.

The US has lived through over 635 riots between May 26 and September 12, and 91 percent of these riots have been linked to the BLM movement, based on data from a joint project of the Armed Conflict Location & Event Data Project and the Bridging Divides Initiative at Princeton University called the US Crisis Monitor. Download a spreadsheet showing the data by clicking here.

Forty-nine states suffered riots during that time, the study discovered.  California led the nation with 86 riots during that point, closely followed by Oregon with 79 riots, writes columnist for David Harris, Rich Welch.

Almost 100 % of riots destroying property is done by Black Lives Matter, study shows: And the Democratic Party appears to have allowed the riots to go on, because of a collective political scheme to make the American people, the ones who fear the riots, so uncomfortable, that they blame President Donald Trump, who has had nothing to do with any riots, in an effort to cause them to vote against the president on November 3rd.

Seven percent of Black Lives Matter events went the way of violence, according to the data.  And now we have advocates, surrogates, and sycophants who are saying that the majority of BLM events are “mostly peaceful” are saying that only to dilute the fact that the 91 percent of riots have been linked to the Marxist organization.

The project outlined “riots” as “demonstrations in which any demonstrators engage in violently disruptive or destructive acts (e.g. violence, looting, vandalism, etc.), as well as mob violence in which violent mobs target other individuals, property, businesses, or other groups.”

Black Lives Matter Global Network, the national arm of BLM, has seen an explosion in financial support from celebrities and large corporations since George Floyd was killed at the hands of Minneapolis police back on May 25 incident.

Some BLM leaders have refused to condemn rioting and looting.  BLM is a Marxist organization, no different from any other Marxist group, whose goal is to destroy the American system and replace it with a utopian heaven on earth.

“I don’t care if someone decides to loot a Gucci or a Macy’s or a Nike store, because that makes sure that person eats,” Atkins said. “That makes sure that person has clothes. That is reparations.”  She also said, “The fact that anybody gives a s–t about these businesses over what is happening in this city right now and the pain that people are in and the suffering that is taking place, I don’t care.”  That’s what we call a sociopathic animal.  She doesn’t care about someone’s business being harmed, because of her brand of social justice.

Almost 100 % of riots destroying property is done by Black Lives Matter, study shows: BLM New York leader Hawk Newsome downplayed rioting in an April interview with Fox News. “I think that it is a tool of white supremacy to say if you want freedom, then you get it by protesting peacefully,” he said.  I think he’s a sick individual who discounts the millions of non white people who believe in peaceful protesting but not violence and crime.

Even when violence doesn’t occur at a BLM event, a core tactic is to make people fear they may be.  Marxists have always used shock troops of useful idiots to frighten people a demoralize  large segments of a population.

That’s the fatal flaw of Marxist organizers.  If the people do not succumb to their way of thinking and are not demoralized, the Marxists lose.

And they know this, which is why they are forcing Critical Race Theory into our public schools, where they want to shove their ideology down the throats of your children starting ages 4 and 5 on up through high school.

They want to embed believes that white children are inherently racist, and therefore evil, and they’re teaching these children that their own parents are also evil.  That is indoctrination.  That is child abuse, and it’s why President Trump has come out against it.

Previous NEW BOOK “Trump. The Battle for America” describes the drivers for the Panic Fear of Covid-19
Next Trump Reelection Is Already Discredited as a Coup Against Democracy