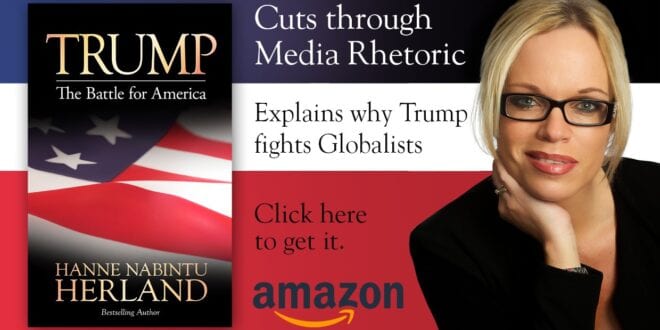 NEW BOOK “Trump. The Battle for America” describes the drivers for the Panic Fear of Covid-19

Herland Report: The Panic Fear of Covid-19: The new book Trump. The Battle for America by Scandinavian historian and bestselling author, Hanne Nabintu Herland cuts through the mainstream media rhetoric and explains why even a pandemic is used in the globalist attempt to stop President Trump.

Herland has the past years met with leading American intellectuals, former CIA and NSA directors, professors, bishops and bestselling authors, former news editors and directors from Judicial Watch and discussed the current level of divisiveness in the United States.

The disturbing conclusion from these talks form the basis for the shocking analysis presented in the new book Trump. The Battle for America, of the leftwing conspiracies, the state of affairs in America, behind the propaganda smoke screen of the media.

This article looks at the effects of the fear of Covid-19 on the public and how it may be used as yet another tool to try to stop President Trump from succeeding in his restructuring of America.

The panic fear of the Covid-19 may be the very element that brought about major economic decline, the worst economic hit for middle class business owners and restructuring of ownership all across the West, writes historian Hanne Nabintu Herland in her new book, Trump. The Battle for America, available here.

While many are discussing red zones, lockdowns and the Corona virus, remarkably few focus on the massive economic decline that comes as a result of the politically determined shutdowns – and who will benefit from it.

As the middle class business owners suffer unspeakable losses, the suicide rates rocket as the fear of Corona grips politicians in a showdown never seen before in human history.

So, why does the media push such panic over Corona, even considering the fact that many of the old and medically frail among us die, but not over regular influenza that kill hundreds of thousands more?

Who will profit from the Corona panic as the economy plunges and massive bankruptcies require new owners and new liquidity to the market?

The psychology of the fear of Corona has so far produced the worst market crash in recent history, maybe ever. The media hype is key.

Do the owners of the mainstream press have market interests? Oxfam numbers show around 60 individuals own over 50 % of world assets, will we see ten individuals own it post-Corona?

In Italy, which has Europe’s oldest population, thousands die yearly from flus, 68 000 died of various flus between 2013-2017, according to one study.

Over 5 million got the illness. We never heard much about that.

Corona may reportedly be viewed as mostly dangerous to the elderly or those who already suffer from respiratory illnesses. Risk lies in the capacity of the heath service to handle respiratory complex treatment. The number of Corona deaths could, of course rise to massive counts.

The average age of those dying from Corona is 79.5 years old, 70 % men, most of whom have two or three other serious diagnosis.

Korea seems to have beaten the virus, demonstrating its discipline and collective approach by implementing social distance, protecting the elderly and business carry-on. Let us take down the Corona virus, not our economies, was the mantra.

The Panic Fear of Covid-19: The illness was not unknown even in March 2020, as China, Korea, Singapore and others already had been through the curve.  Pr. March 15th, China reported, according to Worldometer, a total of 80.849 sick from Corona, 3.199 dead and 66.931 recovered, six to eight weeks peak. Even considering Chinese under reporting, the numbers are still very low. Whoever owns the vaccine, is of course set to earn billions.

The US and the United Kingdom initially chose different approaches from the EU to the emergence of the Corona flu. On the continent and in Scandinavian countries such as Norway, Denmark, panicking political leaders were among the first to “obey the WHO” and choose full economic shut-down of restaurants, barber shops, retail, almost everything except food stores. This pushed the nations into a massive break-down of their economies and a brutal recession.

The US and the UK initially stressed the need to keep business running and daily life open as long as possible, targeting high risk groups. This is the so-called herd immunity strategy. The UK national emergency plan focused on the most endangered, on equipping hospitals, avoiding contact, keeping business open, the country now flooding with respiratory masks.

Prime minister, Boris Johnson prescribes caution and the need to consider avoiding plunging the country into even deeper troubles. This was before the Imperial Report hit the Prime minister’s desk and both the US and the UK changed their approach.

The EU choice of total shut down of the economy was a conspicuously quick response, that produced a much worse economic recession.

The massive recession ahead all across the West and the world as a whole, brutally enhanced by government’s panic shutdown of daily life, will result in catastrophic bankruptcies, hunger and millions of lost jobs.

The result will, in a few months, be a massive shift of ownership as the back of the old system is broken.

The Panic Fear of Covid-19: Wall Street restructuring companies now slip into the already muddy waters, we are set to see a new world where the smartest take it all.

As panic sets in, precisely the shut-down of shops and industries over a virus that has not caused even the same amount of deaths that regular influenzas do, may prove to be the very worst irresponsible action, much worse than the Corona itself.

It may mark yet another ending point of Western hegemony, as Russia quietly celebrates a very low debt rate with a highly competitive oil industry, and China is on the rise post-Corona.