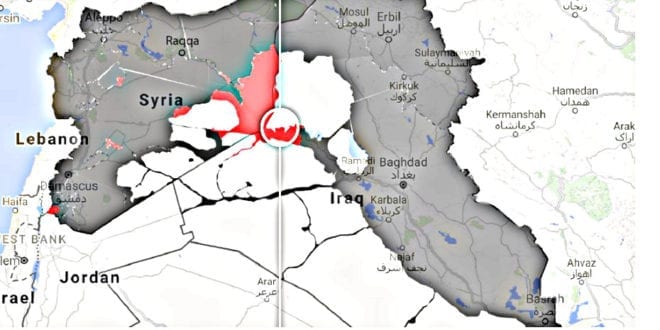 Herland Report: “The last ISIS fighters in Raqqa have been killed or surrendered, and the terror group that once held territory the size of the United Kingdom and ruled over 10 million people has been pushed back to a few dusty towns straddling the Syrian border with Iraq”, writes CNN,.

Completely downplaying the work of the Syrian Arab Army, the victory of ISIS is portrayed as a victory over ISIS as though it was an American victory. This is yet another classic example of the misleading information chronically put out by the tightly censored Western media outlets, misleading the Western public. (Ill: CNN)

“The campaign to eradicate the Islamic State has taken three years and nearly 25,000 coalition airstrikes, in addition to thousands by Russian, Iraqi and Syrian aircraft. In the process, dozens of towns and cities in Syria and Iraq have been pulverized, among them Raqqa, Aleppo, Mosul, Fallujah and Ramadi. The cost of reconstruction — running into hundreds of billions of dollars — is far beyond the capacity of whoever rules either Syria or Iraq. The cost to humanity is worse still.”

In Iraq, the advance of ISIS — followed by the operation to destroy it — displaced more than 3 million people, according to the United Nations.

Nearly 600,000 Iraqi children have missed an entire year of education or more, according to the Internal Displacement Monitoring Centre; thousands have been warped by ISIS indoctrination.

In Syria, the results of the country’s brutal civil war are more shocking:

6.5 million people, including 2.8 million children, have been displaced, according to the UN. In other words, 50 families have left their homes every hour since 2012. A further 5 million have left the country altogether.

The whole world is now aware of the US involvement with different terror groups in Syria, Libya as revealed by Wikileaks and numerous others.

It has been written about in countless articles, documented from all kinds of sources, yet it is but classic that neo-con CNN now ads that “new wars are now coming in the aftermath of the ISIS breakdown”:

“As ISIS loses ground, al Qaeda is eyeing opportunities in Syria. Within the last few weeks a new group has emerged from among jihadi factions in the northwest Syrian province of Idlib: Ansar al Furqan. Brett McGurk, the US envoy for the anti-ISIS coalition, has dubbed Idlib as the largest al Qaeda haven since the days of Osama bin Laden.”

“As these highly experienced AQ veterans still sit in Syria, situated within masses of frustrated jihadists and a growing void of hardliner leadership, only a fool would think that AQ is sitting idly by,” concludes the SITE Intelligence Institute, which tracks jihadi movements.

SITE intelligence Institute, here uncritically quoted, are well known for allegedly discovering the ISIS killing of James Foley and others at the brink of the rise of ISIS back in 2014, which later was internationally deemed to be fake videos.

Looking back, presicely those videos were able to create massive fear of ISIS in the mainstream Western population.

The Western press was at that time portraying a certain British citizen “Jihadi John” as the world’s most dangerous and wanted person, a British citizen who later was believed to be on the MI6 payroll.

At the forefront of this, stood SITE Intelligence leader Rita Katz, whose Twitter account suddenly appeared in 2014, at the same time of the rise of ISIS, and her work – often criticized for being on the CIA payroll – has since been actively quoted in the Western mainstream press.

It is well worth noting her 2006 interview with The New Yorker.

The Herland Report Scandinavian news site, TV channel on YouTube and Podcasts have millions of readers/viewers yearly. It is a great place to watch interviews and read the articles of leading intellectuals, thought leaders, authors and activists from across the political spectrum. The Herland Report believes in freedom of speech and its editorial policy resides above the traditional Left vs Right paradigm which we believe has lost its relevance and ability to describe the current driving forces in Western politics.
Previous The ICC case against Saif Al-Islam Qaddafi should be dropped
Next Western-Made Arms in Terrorist Syria