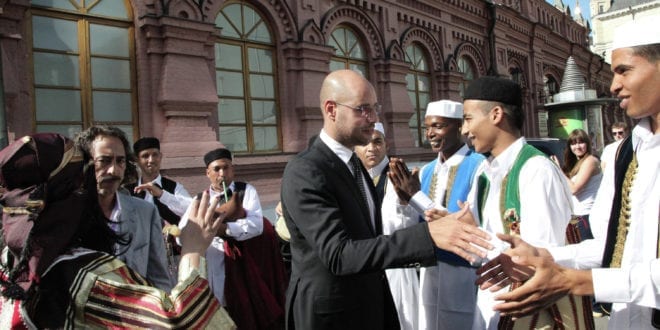 The ICC case against Saif Al-Islam Qaddafi should be dropped

Before the uprising, Saif Al-Islam was the architect of the new Libya. He presented his new vision of Libya free of political prisons, committed to human rights charter, distribution of wealth, prosperity and democracy.

He embarked on political and economic reforms in Libya whereby the radical Islamic prisoners gained their freedom, rehabilitated and engaged in the Libyan society.

Once the violent uprising erupted in some Libyan cities, local sources confirm that he offered his help by engaging in human relief efforts to help the displaced people around the country, released the uprising prisoners, securing the Misratah people who caught on the cross fire and sheltered the Benghazi people who fled the fighting areas. (Photo: Sputnik)

He also called and supported the peace efforts to solve the Libyan civil war. According to sources on the ground, he asked the University of Sirte’s administration to print 5000 leaflets and distributed to the peaceful convoy to Benghazi contained observing human rights, calling for the army to uphold the rule of engagement and prohibiting the use of force against the protesters.

The later was stated by the Head of the Joint Operation Chamber in the 2011 Libyan war, Marchal Al-Hadi Embarrish, who was taken as a prisoner of war by the Al-Zintan militias, badly treated and deprived from medical treatment until he died of cancer in prison in 2014.

Despite Saif Al-Islam Qaddafi’s tireless peace efforts, NATO aircrafts targeted him in an attempt to assassinate him that resulted in a permanent disability and killing of 29 of his comrades.

Also, he lost his fingers and suffered multiple injuries.

Yet, the ICC did not investigate the airstrike, nor oversee his five years of solitary confinement condition and his human rights generally. Furthermore, the ICC persisted demanding his arrest and trial despite he was sentenced to death by a Libyan court that set-in Al-Hadbah prison under Khaled Al-Shareef, the right man of Belhadj.

For these reasons, the unfair trail and dismissal of the case is the only outcome that should be endorsed.

Indeed, it could be argued that the case should be completely dropped especially after the Attorney General assassination in Benghazi and fleeing most Public Prosecution team as they faced an immense pressure from the militias.

With all these circumstances, the ICC arguments were that his death sentence has not been implemented and therefore he should be arrested and jailed in Al-Hadhaba prison.

However, his death sentence was appealed by the Libyan Ministry of Justice on the ground of unfair trial since the court was set in a prison controlled by the Al-Shareef who has power over the court and the judges.

Nevertheless, the ICC continued calling for his retrial and turned a blind eye on the fact that Saif Al-Islam was in the Al-Zintan prison and the Tripoli court had tried him via close circuit TV.

Therefore, the ICC should respect the Libyan law and be aware that a person should not be tried twice for one alleged crime. But the end game for the West and ICC is to get rid of Saif Al-Islam Qaddafi as they did with his father Qaddafi and his brothers.

It is time for the ICC to drop its double standards and side with the Libyan people in their ultimate aim that to salvage their country from these militias and build a new Libya where human rights, prosperity, development and rule of law prevails.

We also call upon the ICC to drop its call for Saif Al-Islam to be extradited and tried by the ICC.

Instead, the ICC should recognise and respect the Libyan Ministry of Justice General Amnesty Law by which Saif Al-Islam Qaddafi should assume his role in the struggle for a new democratic Libya.

In this respect and after the Western countries began to see their mistake, they should work with the sincere Libyans and NGOs to bring these militias and their leaders to justice for the sake of peace and reconciliation.