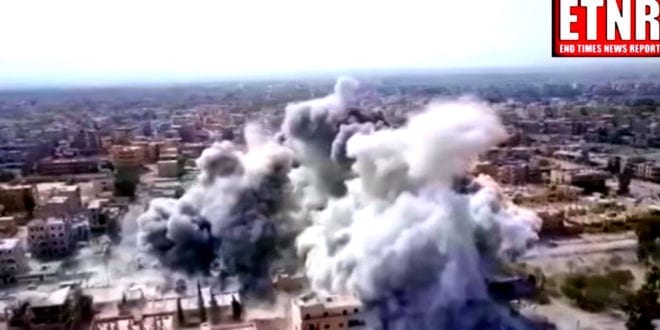 Herland Report: Daesh and al-Nusra Front have received “rockets, machine guns, anti-air weapons and even tanks in exchange for oil stolen from wells in Syria and Iraq,” the Syrian Defense Ministry claims.

On Monday, the Ministry released footage of the arms confiscated from different terrorist organizations, including Daesh (ISIS) and rebranded al-Nusra Front, along with the report, where it said that most of the weapons had been manufactured in the US or by its allies, according to the Syrian Arab News Agency (SANA). (Photo: Deir ez Zoor. EndTimesNewsReport)

How sad to read the below statement.

Syrian Arab Army units discovered large amounts of weapons, ammunition and explosive devices, some of which are Israeli- made in al-Mayadeen city in southeastern countryside of Deir Ezzor.

A field commander said the weapons included several kinds of heavy, medium and light weapons, some of which are of Israeli –made, mortars, ammunition, and NATO -made weapons and other European and western countries.
The commander added that the weapons also included armored and artillery equipment, large quantities of anti-armor , a 155 mm cannon with a range of up to 40 km, of NATO- made.

The manual says that the arms were obtained by terrorists via various channels and via companies in Eastern Europe with ties to the US and NATO intelligence agencies. They had entered Syria via Turkey or Saudi Arabia, where, in turn, they arrived “via European ports of the American Ramstein Air Base in Germany.”

It also says that Daesh and al-Nusra Front terrorists were supplied with “rockets, rifles, machine guns, anti-air weapons, and even tanks in exchange for oil that the terrorists stole from wells in Syria and Iraq.”

After the liberation of east Aleppo and areas in the provinces of Homs, Hama, Aleppo, and Deir ez-Zzor, the terrorists of these two organizations also left behind weapons made in Bulgaria and Eastern European countries, apparently bought and delivered by the US.

The Ministry pointed out that the discovery suggests that the US has been applying the very same pattern it used in Afghanistan in the 1980s, when the US and Saudi Arabia sent weapons to Pakistani intelligence, which ended up with al-Qaeda and the Taliban.

The report specifically points out that Israel had also provided various types of weapons to the al-Nusra Front and other terror groups in Syria.

The document says that these weapons ended up in the hands of terrorists, as evidenced by videos and photos that emerged in social media showing al-Nusra Front terrorists using US-made TOW anti-tank rockets, through the support programs of the administration of former US President Barack Obama, for the so-called “moderate opposition.”

The Ministry noted that all the fighters of the so-called Free Syrian Army who were trained and armed by the US in Turkey in September 2015, later pledged allegiance to al-Nusra after entering Syria.

The same happened with the fighters trained in Jordan, who ended up joining Daesh, and with large number of fighters from the Nour Eddin al-Zinki Movement, a rebel group which was supported by the US, which also joined al-Nusra Front.

The Ministry specifically noted said that after the Obama administration lifted the ban on providing lethal weapons to terrorists, Saudi Arabia bought 15,000 TOW anti-tank rockets from the US at a cost of $1 billion. These weapons have been used by terrorists against the Syrian army since 2014.

“The weapons purchased by Saudi Arabia from Central and Eastern European states are largely incompatible with the Saudi armament program and equipment, indicating that Saudi Arabia isn’t actually the final user of these weapons; rather they go to terrorists in Syria,” the document says.

Over two million CITY 4,000 rockets came from Bulgaria via Saudi Arabia and ended up in the hands of terrorists in Aleppo, it added.

Damascus Claims to Find US, UK Chemical Weapons in Syria

It also noted that on December 19, 2016, while de-mining al-Sakhour area in eastern Aleppo, various types of ammunition were found at the site, “including US-made ammo such as 60mm mortar rounds and grenades fired by launcher attachments for rifles.

”The document specified that among the confiscated weapons were Soviet-made guns which “were likely exported to the states of the Warsaw Pact in the past and were later purchased from these states.

” They ended up in the hands of terrorists “because of the lack of scrutiny about who is receiving them.”

“This is intentional and seeks to escalate the war in Syria, in addition to violating the UN’s Arms Trade Treaty of 2014, which states that it’s illegal to export weapons if there is a likelihood of them falling into the hands of terrorists,” the Ministry stated.

It ended the report by concluding that “geographic proximity and the lack of oversight of exports allowed some states to benefit from the arms trade, and in most cases this was done with the help of the US, which assisted its allies in sending weapons to Daesh and al-Nusra terrorists, among others, and provided high-tech weapons to escalate the situation in Syria. Therefore Washington is responsible for the expansion of these terror organizations in Syria.”

The Channels of Western-Made Arms Supplies to Syria

Earlier on Monday, Gen. Ali Al Ali, chief of the main operational directorate of the Syrian army commented on the revelations, saying that Syrian radicals were supplied with weapons “bought under the Pentagon’s program of assistance to US allies.”

Another Syrian army official, Walid Khali, told reporters that al-Nusra Front militants, who attacked Russian military police in Syria on September 18, had carried over 100 small arms and hand-held grenade launchers made in the United States, Belgium and France, which had been illegally delivered from abroad.

In September, the Organized Crime and Corruption Reporting Project (OCCRP) and the Balkan Investigative Reporting Network (BIRN) issued a report, which revealed that Pentagon had been spending as much as $2.2 billion on its program to supply Soviet-style arms and ammunition to Syria via various contractors and sub-contractors in Eastern Europe and the post-Soviet states.

The report revealed that arms factories across the Balkans and Eastern Europe have been “already working at capacity to supply the Syrian war,” but “are unable to meet the demand.”

“The US Department of Defense (DoD) has turned to new suppliers like Kazakhstan, Georgia, and Ukraine for additional munitions while relaxing standards on the material it’s willing to accept,” the document revealed.”The Pentagon is buying the arms through two channels: the Special Operations Command (SOCOM), which oversees special operations across all services of the US military, and the Picatinny Arsenal, a little-known US Army weapons facility in New Jersey,” it said.

The munitions are the transported by both sea and air from Europe to Turkey, Jordan and Kuwait. They are then distributed to US allies in northern and southern Syria by plane and truck, it stated.

The Herland Report Scandinavian news site, TV channel on YouTube and Podcasts have millions of readers/viewers yearly. It is a great place to watch interviews and read the articles of leading intellectuals, thought leaders, authors and activists from across the political spectrum. The Herland Report believes in freedom of speech and its editorial policy resides above the traditional Left vs Right paradigm which we believe has lost its relevance and ability to describe the current driving forces in Western politics.
Previous CNN says “US won the victory over ISIS” – SITE Intelligence Institute
Next IS, Al-Qaida og salafister er brødre – Trond Ali Linstad