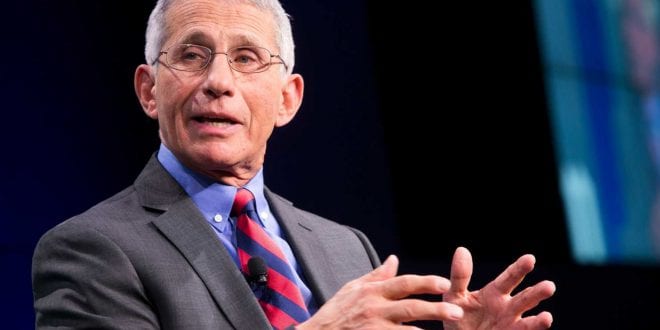 Dr. Fauci says COVID-19 May Turn Out To Be Like A Bad Influenza Season

Herland Report: Dr. Fauci says COVID-19 May Turn Out To Be Like A Bad Flu: Dr. Anthony Fauci and two co-authors published a letter on March 26, 2020 in the New England Journal of Medicine. Dr. Fauci is the Director of the National Institute of Allergy and Infectious Diseases.

In the article, linked below, he states that COVID-19 may turn out to be comparable in numbers of deaths to a seasonal flu or similar to two relatively minor flu pandemics in 1957 and 1968, PatriotFire writes.

The two flu pandemics he cited, the Asian flu in 1957 and the Hong Kong flu of 1968 each are estimated to have killed about 100,000 in the US and about a million globally.

Many are now openly asking if the COVID-19 reaction was overblown, and in that case, who pushed the exaggerations?

If politically motivated, the misinformation has contributed to the largest economic meltdown in a century.

Dr. Fauci says COVID-19 May Turn Out To Be Like A Bad Flu: According to current projections, Covid-19 is expected to kill about one-third as many per million as these earlier flu pandemics, cited by Fauci.

Such extreme measures, as today, were not taken in the US due to these two earlier pandemics, even though relatively speaking they were three times as fatal (per million population) as Covid-19 is projected to be.

The Institute for Health Metrics and Evaluation (IHME) is forecasting about 72,000 deaths in the US this year from Covid-19.

For comparison, seasonal flu killed 80,000 in 2018 according to the CDC, which was a very severe season.

This new estimate is much less than our hysterical media and subject-matter experts had earlier led us to believe.

In the beginning of this historic, media-fueled panic, the numbers being cited implied that potentially millions would die in the US and tens of millions, if not hundreds of millions, globally.

Instead of a fatality rate of around 2% to 5%, as earlier, now Fauci is saying the death rate may be closer to only 0.1% of the number infected. (See excerpt of his paper below.)

He just regurgitated to Congress the numbers from WHO, around 3-4%. He never provided his own opinion published in this paper. Of course, our lying, propagandist media has never reported and explained it to the public, either.

Covid-19 — Navigating the Uncharted – The New England Journal of Medicine

“On the basis of a case definition requiring a diagnosis of pneumonia, the currently reported case fatality rate is approximately 2%.

In another article in the Journal, Guan et al. report mortality of 1.4% among 1099 patients with laboratory-confirmed Covid-19; these patients had a wide spectrum of disease severity.

If one assumes that the number of asymptomatic or minimally symptomatic cases is several times as high as the number of reported cases, the case fatality rate may be considerably less than 1%.

This suggests that the overall clinical consequences of Covid-19 may ultimately be more akin to those of a severe seasonal influenza (which has a case fatality rate of approximately 0.1%) or a pandemic influenza (similar to those in 1957 and 1968) rather than a disease similar to SARS or MERS, which have had case fatality rates of 9 to 10% and 36%, respectively.“

The real “uncharted waters” that we are navigating is the idea of shutting down much of our entire national economy for months at a time and living on borrowed money that we cannot afford in response to a relatively minor pandemic.

Though there have been pandemics in the past, we have never done some of these things before in the U.S. and it could well lead to an economic disaster, from which it will be difficult to recover.

An economic collapse can cause many more deaths in a number of ways than a minor pandemic. Just as one prime example, suppose our enemies are tempted by our weakness and we have to fight a major war, but we are not economically prepared to do that?

The Herland Report Scandinavian news site, TV channel on YouTube and Podcasts have millions of readers/viewers yearly. It is a great place to watch interviews and read the articles of leading intellectuals, thought leaders, authors and activists from across the political spectrum. The Herland Report believes in freedom of speech and its editorial policy resides above the traditional Left vs Right paradigm which we believe has lost its relevance and ability to describe the current driving forces in Western politics.
Previous Imperial Report – WHO Horror Scenarios questioned, allegations of politization
Next Stop the socioeconomic suicide and get back to work #Corona Covid-19