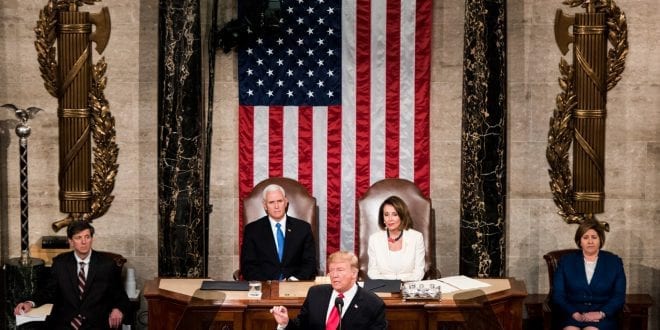 Herland Report: Trump State of the Union: “Three years ago, we launched the great American comeback. Tonight, I stand before you to share the incredible results.”

“Jobs are booming, incomes are soaring, poverty is plummeting, crime is falling, confidence is surging, and our country is thriving and highly respected again. America’s fortunes are on the rise and the America’s future is blazing bright,” president Donald Trump declared in the State of the Union Address on Tuesday evening.

[pullquote]Since my election, we have created 7 million new jobs — 5 million more than Government experts projected during the previous administration. The unemployment rate is the lowest in over half a century.[/pullquote]

“The years of economic decay are over. The days of our country being used, taken advantage of, and even scorned by other nations are long behind us.”

“Gone too are the broken promises, jobless recoveries, tired platitudes, and constant excuses for the depletion of American wealth, power, and prestige.”

“After decades of flat and falling incomes, wages are rising fast — and, wonderfully, they are rising fastest for low-income workers, who have seen a 16 percent pay-increase since my election. This is a blue collar boom.”

“In just three short years, we have shattered the mentality of American decline and we have rejected the downsizing of America’s destiny. We are moving forward at a pace that was unimaginable just a short time ago, and we are never going back!”

Speaker of the House, Nancy Pelosi reached her all time low, demonstrating a spectacular lack of respect for democratic traditions by ripping up Trump comments at the end of his speech.

The notorious Pelosi, having recently explained how Democrats smear, lie and defame their opponents, showed her true colors in the dramatic display of lack of respect for the Presidency.

It sadly speaks for the character of the current Speaker, openly admitting to lying and cheating as the Democrats’ means of countering opponents. Watch the Pelosi clip here.

Read below excerpts of president Donald Trump’s speech to the nation:

Trump State of the Union: “I am thrilled to report to you tonight that our economy is the best it has ever been. Our military is completely rebuilt, with its power being unmatched anywhere in the world — and it is not even close.

Our borders are secure. Our families are flourishing. Our values are renewed. Our pride is restored. And for all these reasons, I say to the people of our great country, and to the Members of Congress before me: The State of our Union is stronger than ever before!

Trump State of the Union: The vision I will lay out this evening demonstrates how we are building the world’s most prosperous and inclusive society — one where every citizen can join in America’s unparalleled success, and where every community can take part in America’s extraordinary rise.

From the instant I took office, I moved rapidly to revive the United States economy — slashing a record number of job-killing regulations, enacting historic and record-setting tax cuts, and fighting for fair and reciprocal trade agreements.

Our agenda is relentlessly pro-worker, pro-family, pro-growth, and, most of all, pro-American. We are advancing with unbridled optimism and lifting high our citizens of every race, color, religion, and creed.

Since my election, we have created 7 million new jobs — 5 million more than Government experts projected during the previous administration. The unemployment rate is the lowest in over half a century.

Incredibly, the average unemployment rate under my Administration is lower than any administration in the history of our country. If we had not reversed the failed economic policies of the previous administration, the world would not now be witness to America’s great economic success.

African-American poverty has declined to the lowest rate ever recorded.

The unemployment rate for women reached the lowest level in almost 70 years — and last year, women filled 72 percent of all new jobs added.

The veterans’ unemployment rate dropped to a record low.

The unemployment rate for disabled Americans has reached an all-time low.

A record number of young Americans are now employed.

Since my election, the net worth of the bottom half of wage-earners has increased by 47 percent — 3 times faster than the increase for the top 1 percent.

After decades of flat and falling incomes, wages are rising fast — and, wonderfully, they are rising fastest for low-income workers, who have seen a 16 percent pay-increase since my election.

This is a blue collar boom. Real median household income is now at the highest level ever recorded!

Since my election, United States stock markets have soared 70 percent, adding more than $12 trillion to our Nation’s wealth, transcending anything anyone believed was possible — this, as other countries are not doing well. Consumer confidence has reached amazing new heights.

Jobs and investment are pouring into 9,000 previously-neglected neighborhoods thanks to Opportunity Zones, a plan spearheaded by Senator Tim Scott as part of our great Republican tax cuts.

In other words, wealthy people and companies are pouring money into poor neighborhoods or areas that have not seen investment in many decades, creating jobs, energy, and excitement. This is the first time that these deserving communities have seen anything like this. It is all working!

Thanks to our bold regulatory reduction campaign, the United States has become the number one producer of oil and natural gas in the world, by far. With the tremendous progress we have made over the past 3 years, America is now energy independent, and energy jobs, like so many elements of our country, are at a record high. We are doing numbers that no one would have thought possible just 3 years ago.

Likewise, we are restoring our Nation’s manufacturing might, even though predictions were that this could never be done.

Trump State of the Union: One of the single biggest promises I made to the American people was to replace the disastrous NAFTA trade deal.

In fact, unfair trade is perhaps the single biggest reason that I decided to run for President. Following NAFTA’s adoption, our Nation lost one in four manufacturing jobs. Many politicians came and went, pledging to change or replace NAFTA — only to do absolutely nothing. But unlike so many who came before me, I keep my promises. Six days ago, I replaced NAFTA and signed the brand new United States-Mexico-Canada Agreement (USMCA) into law.

Listen to Speaker of the House, Nancy Pelosi explain how the Democrats smear, lie and defame opponents by using the “Wrap up Smear” in the media here:

Trump State of the Union: The USMCA will create nearly 100,000 new high-paying American auto jobs, and massively boost exports for our farmers, ranchers, and factory workers. It will also bring trade with Mexico and Canada to a much higher degree, but also to a much greater level of fairness and reciprocity. This is the first major trade deal in many years to earn the strong backing of America’s labor unions.

I also promised our citizens that I would impose tariffs to confront China’s massive theft of American jobs. Our strategy worked.

Days ago, we signed the groundbreaking new agreement with China that will defend our workers, protect our intellectual property, bring billions of dollars into our treasury, and open vast new markets for products made and grown right here in the United States of America.

For decades, China has taken advantage of the United States, now we have changed that but, at the same time, we have perhaps the best relationship we have ever had with China, including with President Xi.

They respect what we have done because, quite frankly, they could never believe what they were able to get away with year after year, decade after decade, without someone in our country stepping up and saying: Enough.

Now, we want to rebuild our country, and that is what we are doing. Read the full speech here.