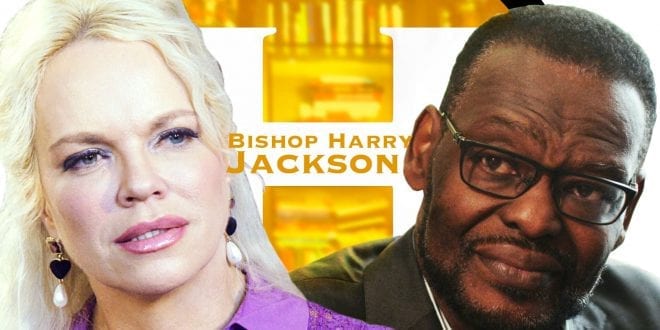 Illegal Immigration is New Slavery: In a divisive time, the wisdom of the forefront spiritual leader, Bishop Harry Jackson, in the Herland Report exclusive interview below, gives Christian perspectives to the current hatred and ethnic conflict.

“At the root of it all, there is a moral crisis. America needs to return to her faith. If America ceases to be good, she will cease to be great,” says Bishop Harry Jackson, a leading American social conservative activist, commentator, a famous lecturer who holds an MBA from Harvard Business School, the Chairman of the High Impact Leadership Coalition and a best-selling author.

He was one of the chief conveners of The Reconciled Church: Healing the Racial Divide Movement – an effort to heal the racial division. Jackson was a regular guest at CBS, 700 Club, CBN, featured in articles in The New York Times, Los Angeles Times, Washington Post, The Washington Times and many more.

In this interview he states: “At the root of it all, America needs to return to her faith. Alexis de Tocqueville said America is great because America is good, and if America ceases to be good, she will cease to be great. I think we are at that point now in our history.”

Bishop Harry Jackson was a regular contributor to The Herland Report. Watch some of our TV interviews with the spiritual leader here and here and here.

Illegal Immigration is New Slavery: He says in this interview: “I will tell you exactly what is going on. There is a play for the White House in the next few years in which the storyline is going to be this: The Democratic Party in America wants to paint President Trump as an intolerant racist, followed by an empowered by people with a kind of racist roots. the Democrats are playing a political game which has a narrative painting Trump like the devil and them appearing to be the heroes.”

“The Democratic Party does not have any sensitivity and want to act like there is no problem with the lowering of rate wages by illegal immigrants. They are simply trying to get votes for presidential elections. Illegal immigration is the new slavery in America.”

He says: “Think about it this way: If I am Hispanic and I am in a meat-packing plant, that industry was rife with folks who were allowed to come into the nation illegally and then working with falsified documents. They often get hurt on the job, injured or even killed on the job. Where do they go?”

“You cannot go and get benefits from an insurance company because you are not supposed to be here. Your family is not going to get any money because of your loss of your entire life, and the fat cats who run the businesses that play on these loopholes are making money, but they are not going to get prosecuted.”

“In America, we have the opioid crisis and the opioids are becoming the rich man’s habits. There have to be wealthy nations that have people with free time and money who are willing to invest in these illicit activities, and at the root of it all is a moral crisis.”

“America and many places in Europe have people who can even afford to spend money on recreational drugs, and one of the problems is in order to sustain the impact of these drugs, people begin to lust and desire for more and more powerful versions of those drugs.”

“At the root of it all, America needs to return to her faith. Alexis de Tocqueville said America is great because America is good, and if America ceases to be good, she will cease to be great. I think we are at that point now in our history.”

“From a spiritual point of view, I am a preacher, so I look through a Biblical lens. I see that there is an anarchistic kind of desire behind, meaning that if certain parties that believe in this new world order believe that the way countries are run now is evil. Many of these thing they advocate for are designed to break the power and the structure of what we call organized Western styled government.”

The Herland Report is a Scandinavian news site, TV channel on YouTube and Podcasts reaching millions.

Previous The 1960’s Multiculturalism is a Marxist invention that crush Western values in the West
Next Bishop Harry Jackson on Racism: Forgiveness is the medicine that heals Wounds