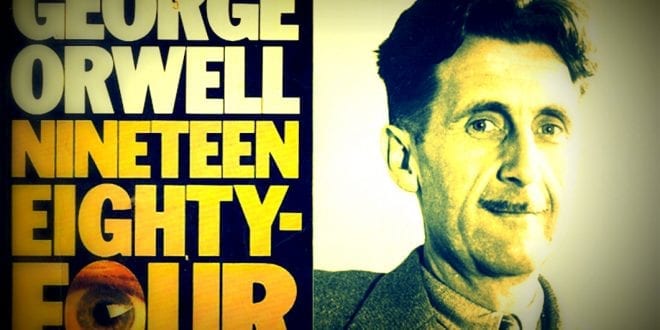 Herland Report: George Orwell and the West becoming Soviet:  Some time ago I wrote about the falsification by historians of World War I.

Now we are watching the falsification of history in Ukraine. What is essentially a US invasion of Ukraine is called a Russian invasion, and the conflict that Washington is provoking is being blamed on Russia.

My generation associated dystopias, such as George Orwell’s 1984, with the Soviet Union, a country in which explanations were controlled and criticism of Stalin would land a person in the Gulag.

We thought of the United States and our life in America much differently. But with the passage of time the difference between life in the Soviet Union in the 20th century and life in the Western world today is disappearing, writes Dr. Paul Craig Roberts, the chairman of The Institute for Political Economy, former associate editor of the Wall Street Journal, and a well known author of many books.

Today, the journalist Julian Assange is undergoing the same kind of state terror and torture as any Soviet dissident, if not worse. It was a mistake for my generation to associate Orwell’s Memory Hole and falsified history only with the Soviet Union.  Falsified history was all around us.  We just didn’t know enough to spot it.

The Western media is as controlled as the Soviet media was, with print, TV, and public radio serving as a propaganda ministry for government and the interest groups that control government.

Social media, such as Facebook, YouTube, and Twitter are systematically denying their platforms to those who express views not supportive of the ruling order and its agendas.

George Orwell and the West becoming Soviet: It has turned out to be easy to get rid of the First Amendment guarantee of free speech as the media have neither the ability nor the intention of exercising it.

What living and learning has taught me is that history tends to always be falsified, and historians who insist on the truth suffer for it. It has been established that many of the ancient historians are unreliable, because they were “court historians” who sought material benefit by writing to please a ruler.

In my time many an historian has written for income from book sales by enthralling the public with tales of glorious victories over demonized enemies that justified all the sons, grandsons, brothers, fathers, uncles, husbands, friends, and cousins who were sacrificed for the sake of capitalist armaments profits.

No publisher wanted a truthful account that no one would buy because of the stark portrayal of the pointlessness of the deaths of loved ones. Everyone, or almost so, wants to think that their loss was for a noble cause and was “worth it.”

With few exceptions, English speaking historians have put the blame for both world wars on Germany.  This is false history.

The first real historian of World War I, or what was called at the time the Great War or the World War, was Harry

Elmer Barnes. Barnes was Professor of Historical Sociology at Smith College and the William Bayard Cutting Fellow in History at Columbia University. His book, The Genesis of the World War, was published in 1926 by Alfred A. Knopf in New York.

Instead of covering up, as expected, the allied crimes and treachery against Germany, Barnes told the truth.  The German Kais

er, a relative of the British and Russian royal families, was known throughout the world as a peacemaker, praised by the New York Times for that role.

It is a known and indisputable fact that the German government acted for peace until Germany, the last power to mobilize, had to mobilize or be overrun by Russia and France, who were allied with the British against Germany.

Never before in history has the very last power to mobilize been blamed for starting a war.  But facts never get in the way of court historians.

The genesis of the war was the desire for Constantinople on the part of two of the Russian Tsar’s ministers, and the French president’s desire to regain Alsace-Lorraine, territory lost to Germany in the 1870 Franco-Prussian war.

These schemers used Austria’s response to the assassination of the Austrian archduke in Serbia, which they likely orchestrated, to declare war as Germany was the protector of the Austrian-Hungarian Empire.

George Orwell and the West becoming Soviet: American president Woodrow Wilson secured an armistice to the World War, which had senselessly destroyed millions of lives, by promising Germany that if she agreed to an armistice, there would be no territorial losses for Germany and no reparations.

When Germany agreed to the armistice, it was Germany that occupied territories of the opposing camp. There were no foreign troops on German territory.

As soon as Germany disengaged, the British put into effect a food blockade that forced starving Germans to submit to the exploitative Versailles Treaty that violated every promise that President Wilson had made.

Some intelligent people, including the most famous economist of the 20th century, John Maynard Keynes, said that the Versailles Treaty, an exercise in coverup for who caused the war, guaranteed a future war.  And Keynes, not the grasping corrupt establishment, was right.

Hitler originated in Germany’s gratuitous humiliation, and his political party’s efforts to put a disassembled Germany back together resulted in WW II.

Barnes was vindicated in 2014 when Christopher Clark at Cambridge University published The Sleepwalkers: How Europe Went to War in 1914.
Clark added to Barnes’ evidence that the Great War resulted from a plot by two Russian government ministers and the president of France to steal coveted territory from Turkey and Germany. The facts and the documentation stand complete.

But one hundred years after the war who is around to care?
All the people who died in the war as well as their bereaved families who suffered from the plot of three evil men are dead and gone.

George Orwell and the West becoming Soviet: The consciousness of the world has already been distorted by a century of false history, a false history that set up Germany for blame again, this time for World War II.

Now in our present time, we are watching liars set up World War III with false reports about Russia. World War III is likely to be a terminal war for humanity. For the demise of the human race and life on the planet we can thank liars.

Consider the irresponsible US Secretary of State Antony Blinken. He is in the news warning US embassy staff in Kiev, Ukraine, that Russian troops and tanks could be pouring over the Ukraine border at any moment. The asseertion that Russia is going to invade Ukraine has been a mainstay of US propaganda for some time.

If Blinken really believes this, why did the US not forestall the expected invasion by giving Russia the security protection she needs by agreeing to no further expansion of NATO?

Why, instead, did Blinken keep the prospect of Ukraine’s membership in NATO open and send more arms and more US military personal to train Ukrainian troops in the use of the American weapons? Blinken understands very well that no amount of weapons in Ukrainian hands could stop a Russian invasion.

It seems that Blinken wants conflict between Russia and Ukraine. Why? Several reasons become apparent once the question is asked. It makes the Russian Threat real and solidifies Washington’s hold on Europe. It calls forth more budget and power for the US military/security complex, and it improves Biden’s faltering chances in the elections.

Biden is damaged goods. He often seems to not really be there. He has allowed into America many illegal aliens and sent them into red states.

He has angered many with his vaccine mandates, with his prosecutions of several hundred Trump supporters as “insurrectionists,” and he has normalized sexual perversion by appointing them to high office. These and other ideological moves have annoyed many Americans who are ready to show their disapproval at the voting booth.

A war rescues the Democrats. Here come the Russians. They won’t stop with Ukraine, and so on. People rally around the president in war time.

This is a plausible reason that Washington turned a blind eye and a deaf ear to Russia’s security concern and is instead worsening Russia’s concern by pouring arms into Ukraine and planning joint military exercises with the Ukrainian army.

We are once again watching a war being set up for selfish reasons.