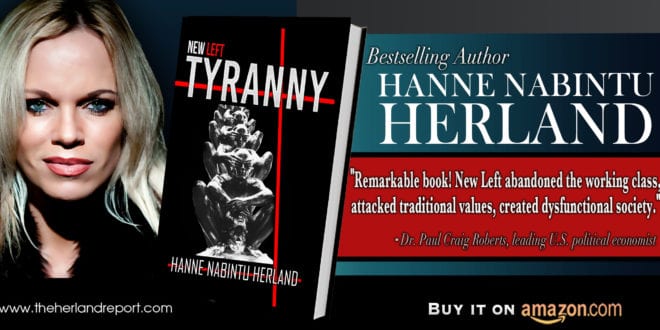 Under the current globalist system, we are gradually returning to the feudalist structure of the Middle Ages. Some very few, wealthy individuals own everything, the rest of us are bound to the globalist kings and lords of debt.

The return of feudalism is the product of the income and wealth concentration arising from a financialized and offshored economy.

This is Robbery Capitalism, not the historical Capitalism that built the West.

Man is enslaved yet again in a cunning system of political repression, writes historian and bestselling author, Hanne Nabintu Herland in this excerpt from her latest and newly launched book, New Left Tyranny.

Herland is the founder and host of The Herland Report Scandinavian news site, TV channel on YouTube and Podcasts which have millions of readers/viewers yearly.

New Left Tyranny:  Globalist Capitalism reintroduces the feudal system with Oligarch Overlords:  The current globalist Robbery “Capitalist” system based on greed and lack of trust is vastly different from the historical Capitalism that built the West and lifted millions out of poverty.

The original, historical Capitalist model asserted the individual’s right to own the fruits of his labor. If he worked harder, he earned more.

This economic model made possible what traditional Americans have labeled “the American dream,” implying that anyone can reach any economic height if he only works vigorously for it.

New Left Tyranny:  Globalist Capitalism reintroduces the feudal system with Oligarch Overlords:  In this system, there is no socialist centralized state stopping the individual. No feudal lord owns it all. The historical system rewards the man who is the most resilient, hardest working individual.

The historic Capitalist model brought millions out of poverty and away from the feudal structure that dominated Europe from the 800s AD to around 1200. It was closely connected to the Protestant ethic ideal of trustworthiness and a strong Christian ethic where reliability was key.

The globalist Robbery Capitalist system we have today, based on the transnational business model that avoids paying tax to any nation, exploits the lower classes, ruthlessly outsourcing jobs, robbing the working class – this system based on greed and lack of respect for the worker is a Capitalism devoid of its historical values. It is no longer a system based on trust and reliability.

Only a few individuals now own more than half of world assets, according to The Independent. The same elites own much of the mainstream media and easily push the narrative and political agenda to benefit their own dreams of world dominion.

Globalist elites openly speak of the need for a new world order with new sets of ethics. Especially since the mid-1980s, they have pushed for a system that massively benefits the ultra-rich and depraves the middle-class of its revenues, dominating the public through tight control over the media.

The original Capitalist model gave freedom to the working class

New Left Tyranny:  Globalist Capitalism reintroduces the feudal system with Oligarch Overlords:  The original Capitalist structure liberated, to a high degree, the individual from the bondage of the feudal system.

The feudal lord was no longer the determiner of how much each worker was paid. He could not control worker behavior the same way as before. The worker could resign, get a job somewhere else that paid better and so on.

In this process, the feudal lord lost much of his power over the worker, which also helped push forward the democratic system.

The worker, who now owned the fruit of his own labor, began deciding what he would prefer to do with his life. Many moved to the growing cities, emigrated to the colonies. They forged brand new lives based on the liberty of the individual to freely choose and pursue his dreams.

These liberties arose at a time in history when the United States wrote its Constitution (1787). This document is permeated with the early and initial Capitalist freedoms for the working class, soaked in the Protestant ethics and belief in God’s mercy.

The individual liberties found in the American Constitution contributed to the breaking down of the hereditary system in which the son of a carpenter also became a carpenter, the son of a merchant tended to become a merchant, and so on.

New Left Tyranny, new book by Hanne Herland:  Globalist Capitalism reintroduces the feudal system with Oligarch Overlords:  With the oncoming of the colonies, working-class members in Great Britain became bank owners in America. They who had served the British aristocracy, rose to the top of the economic elite in the United States. Independent education opened brand new possibilities and rewarded the hard working.

This economic model developed in close coherence with the Protestant ethic, focusing on trust, reliability and hard work as the virtue. Values mattered back then as motivational defined ideals.

The historical Capitalism functioned quite well as individuals participating in its free enterprise were largely trustworthy with the aim of helping society to prosper. The aim was to save the money and reinvest, in order to build an even better society.

Socialism and Communism wants the state elite to control everything

New Left Tyranny:  Globalist Capitalism reintroduces the feudal system with Oligarch Overlords:  The individual liberties ingrained in the historical model of Capitalism are the very freedoms that a socialist, atheist system seeks to out root, since it challenges the dominion of the state elite.

To a socialist, the state is to rule us all, its Marxist elites to control the work force.

This is one of the reasons why the American Constitution is under such fire today, as it is vital for a neo-Marxist ruling elite that first took power after the student rebellions in the 1960s, to demolish the freedoms of the individual in order to succeed in state control.

As we know, the leaders of the New Left student rebellions, such as Herbert Marcuse, openly stated that their ideology was neo-Marxist. They effectively went to war against traditional American values, the family, its Christian values, the belief in traditional marriage and so on.

The principle of individual responsibility is not hailed in the socialist model based on Marxism, where individuals are “granted payment” from the state regardless of how they perform.

It is a passive way of receiving the same as everyone else, punishing individual responsibility or free thought, incarcerating critical thinkers and journalists. Its outcome was demonstrated in the Soviet Union, where the ideal was obedience to the state elite, submission to Communist atheism and a culture of rampant fear of authorities among its citizens. Free speech simply did not exist, and whoever spoke up ended in jail or the Gulag.

In a Marxist inspired state – socialist, Communist etc – the ideal is for a a general wage level to be set for all, no need to put in the extra mile. The state employs, the state owns the company, the state distributes to each his pay, the very exact amount to everyone. There is no incentive for success beyond a worker’s general wage.

Socialism is a system that continues the feudal society of over-lords; only now the state elite owns everything.

New Left Tyranny:  Globalist Capitalism reintroduces the feudal system with Oligarch Overlords:  Today, we have a new type of Capitalism devoid of trust, dependent on financial markets that push for profits with remarkable greed and lack of responsibility for society as a whole.

It has become socially acceptable to rob the individual by lying to him about why he should buy an expensive property, while the banker is fully aware that this will cause bankrupcy down the line, as the worker cannot pay.  We have entered a world of robbery Capitalism.

The recent financial break-down also illustrates the lack of trustworthiness in the system.

To what degree is Wall Street occupied with fictitious capital, nonviable derivative products that create even more bank loans and the enslavement of the working class through debt? To state the obvious, there is something distinctively selfish about pushing others over the cliff, while a banker earns millions from it.

Dr. Paul Craig Roberts is chairman of The Institute for Political Economy and a well-known author of many books. In one of his recent interviews with The Herland Report TV on YouTube, “Financial Crisis”, he says:

“The reason they are too big to fail is because the Central Banks were supposed to be their regulators. They have failed in their job and allowed massive mergers in the creations of monster financial organizations which are so large that if they do fail, it has such horrendous effects on everybody else that we say we can’t let them fail. So, we created a Frankenstein monster and we couldn’t let it fail. So they keep throwing out money, money, money. Everything that was accomplished during the Depression, to make capitalism workable, has been taken away.”