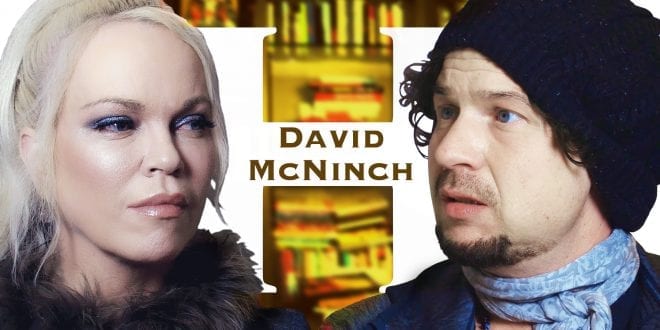 How do we survive this age? The story of David McNinch

[pullquote]For many inmates, I would be the first person they see when coming out of prison. [/pullquote]

“As for my life, it required an entire break-down. Only then I began to study which values my life had to be built on in order for me to succeed. I think America needs to do just that. It needs to take a very serious look at what our foundations are built on, 2019.”

“There are glorious people in America, but the representation is a nightmare. It is radical. Ever since 9/11 it has been one extreme or the other,” says American citizen, street preacher and rock musician, David McNinch who has a strong, personal story to tell. What happened to those who felt the heat from the 2007 financial crack down? How is life in a society where the family is broken down?

Why isn’t the rampant drug abuse stopped by American authorities? And what is the role of faith and the belief in God, in all this?

We invited David McNinch to tell us about his life and let us in on how it is to live through the recent decades of decay in America. What does he see as the way out?

David says: “America needs the voice of reason, the ability for two people to say “maybe I was wrong, maybe you were wrong.” Then you negotiate and you are not all the time fighting for the right to be right all the time.”

[pullquote]There are glorious people in America, but the representation is a nightmare. It is radical. Ever since 9/11 it has been one extreme or the other.[/pullquote]

“The good news is that love wins, I think. We conquer all things through love, mercy and forgiveness.”

“There was a time in my life when my life was the American dream, a nice house, a family. But my whole foundation was falling apart, little by little. It was a ripple effect from the economy and the crash in 2007.”

“The system around me was falling apart, I began to question why I was not good enough and could not take care of my bills and so on. I developed a drinking habit. Over a course of years, it got severe.”

“My experience now is that I do not want another person to go through what I went through. The self loathing, the feeling of worthlessness, the sense that your life is done.”

[pullquote]America needs the voice of reason. The ability not to fight to be right all the time.[/pullquote]

“In my experience in America and what I have seen, my trials, I began studying the Bible and I saw such a separation between what The Lord intends and the value systems today. The family structure, the family disappears in America now, everyone is working all the time.”

“All I had to do is lose everything to realize all of this. I saw such dynamic between what the Word of God says and what we have drifted into. To me this is an experiment.”

“We don’t all get a fair shake in life. It is a sick system to me, I see it with Memphis, the crime, how many want to move as far away from it as they can. It is left to the activists and churches – and recently the activists are working together with the churches – to provide for the homeless.”

“They find a way to keep you trapped in the system, it is a way to keep you condemned. Jesus said “we condemn the sin, but love the sinner.” If we treated human beings that are incarcerated in the prisons in the same way, the same level of understanding, we would see a great change.”

[pullquote]We don’t all get a fair shake in life. It is a sick system to me.[/pullquote]

“For many inmates, I would be the first person they would see when coming out of prison. I would have brochures with half-way houses and job opportunities, try to connect people. From my own experience, you go through these long tunnels and you are let out of prison. With the liquor store across the street.”

“We need to rehabilitate individuals, and not lock them away and let them be non-function members of society, when they did not get a good start to begin with.”

“There is a perversion of honor and entitlement in America. We interfere in other people’s problems, meddle a lot, what our motivation is – we are not that good heartedly – there are reasons for the wars.” [pullquote]Love wins! We conquer all things through love, mercy and forgiveness.[/pullquote]

The Herland Report is a Scandinavian news site, TV channel on YouTube and Podcast on Sound Cloud, reaching millions yearly. It is a great place to watch interviews with leading intellectuals, thought leaders, authors and activists from across the political spectrum – free from political correctness.

Previous General Soleimani is “peace dove” in eyes of Hollywood Democrats?
Next Life in America has become a demoralizing existence – John Whitehead