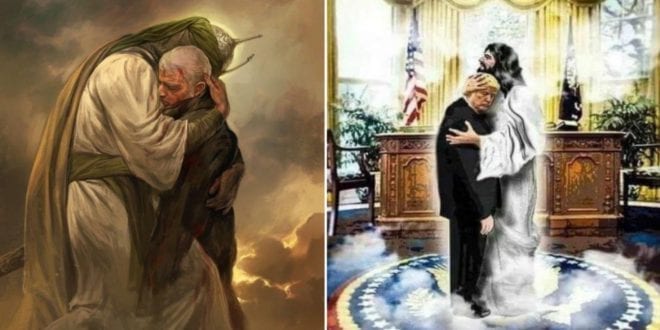 General Soleimani is “peace dove” in eyes of Hollywood Democrats?

Herland Report: The US assassination of General Qassem Soleimani has illustrated quite well how little many in the West actually know about the realities on the ground in the various Middle Eastern countries.

The killing was instantly politicized domestically by Democrats and Hollywood, as if yet another reason to “remove Trump”. military leader, head of Iranian covert operations and militia groups were some kind of “peace dove”. Do they even know what shia-Islam is? How this type of Islam treats its dead heroes? Has Hollywood turned shia-Islam now or what is this? Let us look at it with some irony:

What is it with Hollywood? Are they behind some Iron Curtain with a level of ignorance that must be worse than the Soviet Union?

The table truly has turned. Many in the United States live behind Soviet walls in their utter naive perception of the international world.

Hollywood actress, Rose McGowan’s tweet serves as an example: “Dear #Iran. The USA has disrespected your country, your flag, your people. 52% of us humbly apologize. We want peace with your nation. We are being held hostage by a terrorist regime. We do not know how to escape. Please do not kill us. #Soleimani.”

McGowan, who states in her Twitter account that “I am here to make society better” (sic), actually says the United States is “being held hostage by a terrorist regime” when president Trump is the people’s elected president. She thereby openly states that she does not respect the outcome of democratic elections.

When a president is elected by the majority of the people in the nation, McGowan thinks that makes it a “terrorist regime”? The stupidity is unbelievable.

Why don’t Hollywood actors act in Walt Disney movies and leave the real world to competent others? It would be indefinitely better if such women shut up, instead of displaying their ignorance to the whole world.

How brainless must not Hollywood seem in the eyes of Russians, Iranians, Syrians who live in a reality millions of miles away from the puffed up manicured Beverly Hills mansions? Hollywood actresses such as McGowan make the West look like idiots in the eyes of other cultures.

McGowan is but one example of the same phenomenon engulfing the West:

We have this chronic need to portray political fractions in countries we have little knowledge of as “representatives of what is good” or “pure evil”.

Set aside the analysis for why the assassination that obviously broke with international law, took place:

Since when was a military general, head of a nation’s covert operations and CIA, a “peace dove”? We are talking about a region at war and some think its generals are Walt Disney like “peace doves” on endless peaceful diplomatic missions..?

And yes, not to forget: Syria has been “evil” now for years. Assad is “evil”, but Obama was “indefinitely good”. Putin is “evil” but Japan is “good”.

And all women should vote for Hillary Clinton, for she is “good for women and a feminist”. It is as though we never grew up, still watching Walt Disney films for children and dividing the world into groups, accordingly.

We agree that the world needs polarity of power, duality in strength. The Herland Report has written about the need for respect for national sovereignty for years. That does not mean that anything America or Trump does “is evil”, and other nations are “peace doves”.

Who reads Arabic newspapers to know what happens in Syria domestically? Much never even ends up in a newspaper.

Who reads Russian, and how is it with free speech in Russia, by the way? Russia Today (RT) is remarkably great at criticizing the West and the US, and equally remarkably silent in criticizing Russia, their own president or their own power structures.

If you have noticed, RT seems more and more to be about bashing only the West. What about reporting critically what happens in Russia?

Not to mention China, is there no corruption in “wonderful China”? Do Westerners or Hollywood want China to take over the dominion in the world?

Has anyone checked out the level of free speech in China recently? Power corrupts, regardless of race. Iranians are corrupt too, not only Americans.

Don’t get me wrong: Russia is a wonderful place with a great history and people, Iran equally a great nation with such a rich history, not to forget the wonderful Iranian food. But that does not make these nations the saints of the world while president Trump “always is the devil”.

And here is the problem: The American Democrat Left – whose “benevolent billionaires” also own the US media, do all in their power to demonize Trump.

Since Trump authorized the assassination of Soleimani, all hell breaks lose. The Democrats instantly view the conflict as yet another way of completing the current ongoing attempted coup d’etat in the US, against their duly elected president. Just compare with the tone when Obama went to war, it was dramatically different, both in Hollywood and in the media.

While Russia and its president Putin swears to a reality oriented realism as approach to conflicts, the Western public is caught in ideology and utopian perceptions of regions that many never even visited.

If a re-implementation of national sovereignty is the goal, let the Middle Easterners solve the Middle East. Let Iran, Israel and Syria sort out their issues.

Americans sure have enough to do in order to solve American divisiveness, impeachment theatres, corrupt politicians and a nation in an ongoing coup d’etat.

Most of us know nothing about Iran. It is better we shut up. Or at least, respect the Middle Eastern plurality and listen to a variety of sources. Or do we actually want to hail an Islamic Revolution state such as Iran? Has anybody even heard about the fact that free speech is zero, over there?

The Hollywood actresses who praise the Iranian system would not even be allowed to land in Teheran without putting on total Islamic veils and cover even the slightest part of their hair, arms, legs and so on.

Let them try start demanding “free speech” in Iran, for example, and begin building Christian churches, for that matter. The point is, there is good and bad with every country. We should try mimic the Russians and get some realism into the way we view the world.

Previous Black Lives Matter, Disenfranchised groups React to Injustice – Devon Johnson
Next How do we survive this age? The story of David McNinch