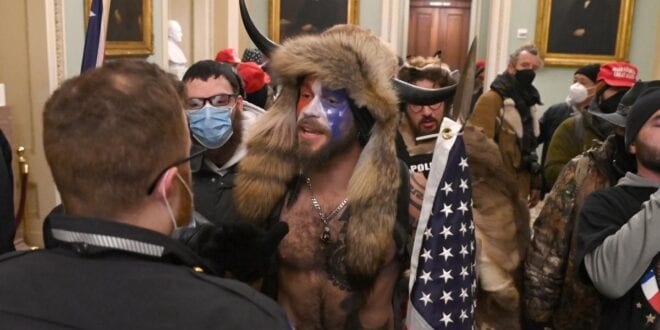 Maidan style US revolution? 60 policemen injured in the armed assault on Capitol

Herland Report: Over 60 policemen were injured at the Capitol assault, the rioters armed and much more dangerous than previously said, reports state.

This points to a much more coordinated attack than previously assumed, as regular Trump supporters in a peaceful rally would not carry arms. Are we watching a Ukraine Maidan style revolution in the US?

Daily Wire: Washington, D.C. Metropolitan Police and the Capitol Police are defending their response to riots at the United States Capitol, arrests are being made, suspects are being sought, and the protesters were more dangerous than they may have appeared on social media.

Capitol Police Chief Steven Sund denied accusations that his department stood down in the face of a demonstration that quickly became a riot on Wednesday, telling the media that the Capitol Police did not expect what turned out to be an armed attack.

Maidan style US revolution? 60 policemen injured in the armed assault on Capitol: Rioters ‘actively attacked’ Capitol police and other law enforcement officers Wednesday with metal pipes, discharged chemical irritants, and took up other weapons against our officers,” he added in a statement.

The incident, Sund said, was “unlike any I have ever experienced in my 30 years in law enforcement here in Washington, D.C. Make no mistake: these mass riots were not First Amendment activities; they were criminal riotous behavior. The actions of the USCP officers were heroic given the situation they faced.”

Sund’s statement notes that Capitol Police were prepared and had a “robust plan” for what they thought, based on previous experience, would be a peaceful demonstration. “These mass riots were not First Amendment activities,” Sund added. “They were criminal riotous behavior.”

Members of both parties were hastily evacuated for their own protection during the invasion that saw dozens, if not hundreds, of demonstrators swarm the Capitol building, ransacking offices, stealing items, and pushing to enter secure chambers. Late Wednesday and early Thursday, many of those legislators spoke up, demanding to know why rioters made it so far into the building.

Maidan style US revolution? 60 policemen injured in the armed assault on Capitol:  The Associated Press also notes that lawmakers are concerned that the Capitol Police are suffering from “a lack of preparedness” that ultimately “allowed a mob to occupy and vandalize the building.”

“Capitol Police, who are charged with protecting Congress, turned to other law enforcement for help with the mob that overwhelmed the complex and sent lawmakers into hiding. Both law enforcement and Trump supporters deployed chemical irritants during the hours-long occupation of the complex before it was cleared Wednesday evening,” the AP reported.

Washington, D.C., Metropolitan Police chief said, in a press conference Thursday, that 68 people have been arrested for crimes related to yesterday’s riot, and that the department is working with Federal law enforcement officials to “to identify and hold each and every one of the violent mob accountable.”