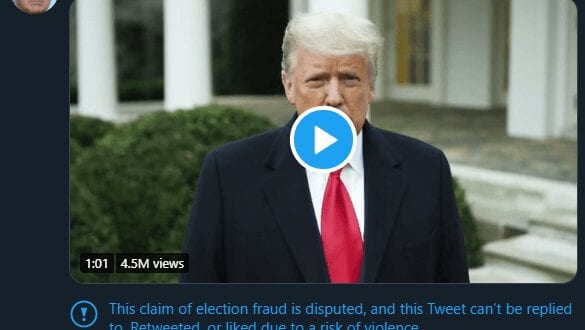 Herland Report: Turning point for Digital Speech as Tech Giants ban Trump: As chaos and anarchy erupts in the United States Capitol Hill, Twitter and Facebook ban the current US president from participating in its social medias.

Edward Snowden says As Edward Snowden put it, “Facebook officially silences the President of the United States. For better or worse, this will be remembered as a turning point in the battle for control over digital speech.”

The Facebook decision, which also was implemented, to ban Trump from its platform indefinitely or at least until after the transition is the turning point in the battle for control of digital speech.

This marks the beginning of a whole new era in the West. We are now ruled by high tech companies dictating who among presidents, ministers or world leaders – as well as any ordinary person – is to be allowed to speak or not.

In the Twitter video, the exact words of President Trump, for which he is said to incite violence are, as reported by Breitbart:

“I know your pain. I know your hurt. We had an election that was stolen from us. It was a landslide election and everyone knows it, especially the other side. But you have to go home now,” said the President.

“It’s a very tough period of time. There’s never been a time like this, where such a thing happened, where they could take it away from all of us; from me, from you, from our country. This was a fraudulent election.” Turning point for Digital Speech as Tech Giants ban President Trump, Herland Report: Twitter took its censorship of President Trump to a new level by actively deleting the President’s tweets, including a video calling on supporters to peacefully disperse.

Tic Toc banned in the US: Used to monotor US citizens?

Tolerance for Free Speech is the enemy now.

Twitter also suspended the President’s account for 12 hours, and threatened to ban him permanently from the platform.  The deletion came after Twitter first censored the video and tweets from Trump, preventing users from liking, retweeting, or replying to the tweet because of a “risk of violence.”

Twitter explained its decision: “As a result of the unprecedented and ongoing violent situation in Washington, D.C., we have required the removal of three @realDonaldTrump Tweets that were posted earlier today for repeated and severe violations of our Civic Integrity policy.” One of the tweets was the short speech above.

Previous Islamic Persecution of Christians seldom criticized in the West
Next Maidan style US revolution? 60 policemen injured in the armed assault on Capitol