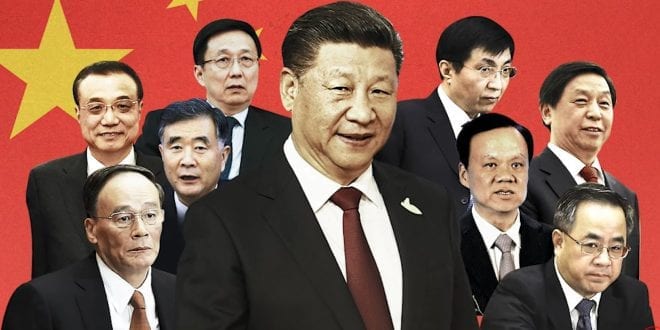 Herland Report: China Floods America with Spies? The reported complete penetration of American society by the Chinese is overwhelming America, according to Asian reports.

China has hundreds — perhaps thousands — of agents in the U.S. identifying, grooming, supporting, influencing, compromising, and corrupting Americans in politics and other fields of importance to it.

Gordon G. Chang is the author of The Coming Collapse of China, a Gatestone Institute Distinguished Senior Fellow. He writes that revelations this month about U.S. Rep. Eric Swalwell, a California Democrat, highlight Beijing’s complete penetration of American society.

China’s influence, intelligence and infiltration attempts are overwhelming America. Given the emergency, Washington should immediately close down all of China’s bases of operation in the U.S., including its four remaining consulates.

Perhaps the most striking aspect of the news about Swalwell is that Fang Fang, a suspected Chinese Ministry of State Security agent also known as “Christine,” first contacted him not while he was sitting on the House Intelligence Committee but when he was a councilmember in Dublin City, California.

Fang followed and promoted his career as he was elected to the House of Representatives and assigned to a committee of great interest to China.

China Floods America with Spies amid Capitol Assault: China has hundreds — perhaps thousands — of agents in the U.S. identifying, grooming, supporting, influencing, compromising, and corrupting Americans in politics and other fields of importance to it.

To identify and work with all the Swalwells, China’s collectors may even number in the hundreds of thousands. Darrell Issa, the Republican returning to Congress from California, told Fox News on December 11 that there are “hundreds of thousands of people that act like spies that are coordinated by China.”

China has a “thousand grains of sand” approach of interviewing students, tourists, and businessmen and women returning to China, collecting seemingly inconsequential bits of information. Beijing, however, is able to collate collected material, using its growing artificial intelligence and other capabilities.

Fang appears to be more than just a casual collector of information. She may have even “honey-trapped” Swalwell, who has yet to deny allegations of a sexual relationship with her. Fang came to America sometime around 2011 to study at Cal State University East Bay, where she ran a political group, a local chapter of the Asian Pacific Islander American Public Affairs organization. At the moment, China has approximately 370,000 students in American colleges and universities. The number of Chinese students has tripled in a decade.

Each student is a potential agent because all are under a legal compulsion to commit espionage against the United States. Articles 7 and 14 of China’s National Intelligence Law of 2017 requires every Chinese national to spy if demanded. Moreover, no Chinese citizen can resist a demand to spy — or to commit any other act — in the Communist Party’s top-down system.

China, not surprisingly, is systematically employing its nationals for gathering intelligence and using diplomatic facilities to handle them. Fang, for instance, was in contact with a diplomat suspected to be a Ministry of State Security agent, based in the San Francisco consulate.

That consulate even harbored a fugitive wanted by the FBI. Tang Juan finally surrendered to U.S. authorities on July 24 after fleeing to the safety of the compound a month before. She is suspected of concealing links to the Chinese military while working as a biology researcher at the University of California Davis.

In July, the State Department ordered the closure of China’s Houston consulate. Secretary of State Mike Pompeo said the facility was a “hub of spying and intellectual property theft.” There is speculation the consulate was used to illicitly obtain, among other things, oil-drilling technology of nearby Texas firms.

China’s New York consulate is also an espionage hub. James Olson, a former CIA counterintelligence chief, “conservatively” estimated that China, in the words of the New York Post, “has more than 100 intelligence officers operating in the city at any given time.” New York City, he said, is “under assault like never before.”

Pompeo told the New York paper that those intel officers are operating out of the New York consulate and the Chinese mission to the United Nations.

China Floods America with Spies amid Capitol Assault: Wray, in front of the Senate Intelligence Committee in February 2018, stated that China is using “nontraditional collectors, especially in the academic setting, whether it’s professors, scientists, students,” something “we see in almost every field office that the FBI has around the country.”

Sometimes diplomats directly engage in espionage. They have been, according to a study by Anastasya Lloyd-Damnjanovic for the Woodrow Wilson International Center for Scholars, “probing faculty and staff for information in a manner consistent with intelligence collection.”

There is one way to meet this espionage-flood emergency: shut down China’s bases of operations in the U.S. This means closing Beijing’s four remaining consulates — Chicago, Los Angeles, New York and San Francisco — and substantially reducing the staff of the embassy. The embassy, in reality, needs only the ambassador, immediate family, and personal staff, not the hundreds currently assigned there.

While cutting the embassy staff to the bone, the State Department should expel the current ambassador, Cui Tiankai. He and someone from the New York consulate tried to recruit a scientist in Connecticut as a spy.

Washington can tell Beijing that it can send another ambassador, but should warn the Chinese that he or she will be expelled at the first sign of inappropriate conduct.

Will Beijing merely transfer spies to Chinese banks and businesses operating in the U.S.? Probably, but that will take time and, in any event, Washington can order the closure of non-diplomatic outposts as well. In this regard, President Trump can use the Trading with the Enemy Act of 1917 and the International Emergency Economic Powers Act of 1977 to end trade, investment and technology cooperation with a regime using these ties to commit espionage.

China will retaliate, of course, by closing U.S. consulates and reducing the size of the embassy staff in Beijing. Analysts will argue that because America is an open society and China is a closed one, Washington needs diplomatic outposts in China more than the Chinese need theirs in America.

This is a strong argument, but the U.S. should nonetheless act to show Beijing that it is absolutely determined to defend itself. Nothing says “political will” more than being willing to take a big hit.

Others will say American businesses in China need consular support. Of course they do. My reply is that it is in America’s interest to get its companies out of that country, for moral as well as other reasons. The loss of consular support will be one more reason for them to pack their bags in a hurry.

China’s spies are overrunning America, and less drastic measures have failed. It is time, therefore, to do something effective.

Previous Maidan style US revolution? 60 policemen injured in the armed assault on Capitol
Next Elon Musk is now richest in the world, surpassing Jeff Bezos