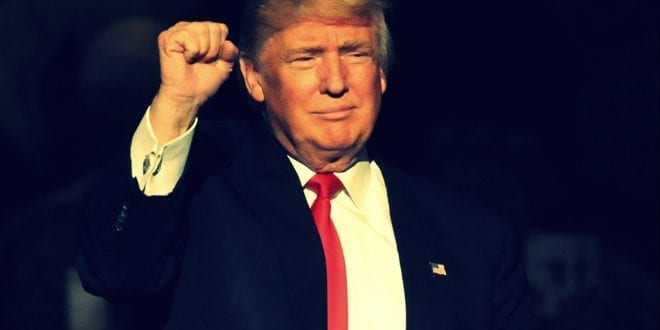 If you watched President Donald Trump deliver his annual State of the Union address this week, you can see why the left and its mouthpieces in media lob nonstop insults against him and trash-talk his administration.

It’s to create a lot of noise and political theater to distract voters from Trump’s many achievements since settling in at 1600 Pennsylvania, writes syndicated columnist, national TV commentator, Boston Herald columnist and talk-show host, Adriana Cohen at WND.

But those aren’t the only ones benefiting from Trump’s bold leadership. Unemployment for Americans with disabilities and unemployment for veterans have also reached all-time lows.

Today in America, 157 million people are working – more than at any time in our nation’s history – providing economic prosperity across demographics, especially for women, who are occupying 58 percent of new jobs.

Despite the left’s vacuous talking points that the Democratic Party is the “party of women” and that it’s the party that champions minorities, it’s actually Republican-driven policies that have delivered results.

No surprise that in the past 24 months, the current administration has been able to lift nearly 5 million Americans off food stamps while doubling the child tax credit.

But that’s not all. Under the Trump administration, wages are up. The gross domestic product is robust, at 3 percent growth, and manufacturing jobs are back with a vengeance.

The growth of manufacturing jobs is 714 percent higher than it was under the Obama administration – despite Barack Obama’s telling a steelworker union official during a 2016 town hall in Elkhart, Indiana, that some jobs “are just not going to come back” and then questioning at a campaign event whether then-candidate Trump had a magic wand to bring those jobs back.

Turns out we didn’t need any fairy dust after all.

Voters just needed to elect a jobs president such as Donald Trump, whose historic tax cuts and regulatory, trade and tariff reforms were the secret sauce in creating 600,000 manufacturing jobs in the past two years, revitalizing this withering sector.

And then there’s our nation’s energy renaissance. For the first time ever, the United States is the No. 1 energy producer in the world. We’re a net exporter of energy, making us significantly less dependent on oil-producing nations – such as Iran, Saudi Arabia and Venezuela – that don’t share our values.

With health care, President Trump eliminated the unpopular Obamacare mandate penalty and led the passage of right-to-try legislation for critically ill patients while lowering the cost of prescription drugs. For context, last year drug prices had the single biggest decline in 46 years, benefiting our senior population most directly.

On the foreign policy front, the current administration has decimated the Islamic State’s deadly caliphate, withdrawn from the disastrous Iranian nuclear deal and delivered on a long-standing promise to move the U.S. Embassy in Israel from Tel Aviv to Jerusalem.

President Trump has also succeeded in getting many allied NATO nations to pay their fair share in military defense – an estimated $100 billion – benefiting U.S. taxpayers. No prior administration had the chutzpah to do that.

And when it comes to criminal justice reform, the current administration passed once-in-a-generation legislation allowing for fairer sentencing of some drug offenders and giving many nonviolent drug offenders, who are disproportionately black, a second chance.

With immigration, Trump is working night and day to secure our porous southern border from drug cartels, sex traffickers and other dangerous actors to keep the homeland safe. Obstructionist Democrats would rather open dozens of investigations against the president and his family than stop thugs and drugs from entering our communities.

But nothing got more applause during the president’s second State of the Union address than his vow to protect our nation’s founding principles of liberty and self-determination.

The president said: “Here in the United States, we are alarmed by the new calls to adopt socialism in our country. America was founded on liberty and independence and not government coercion, domination and control. We are born free, and we will stay free.”

That’s assurance to America that despite the noise in Washington, under a Republican administration, liberty and opportunity will survive another day.