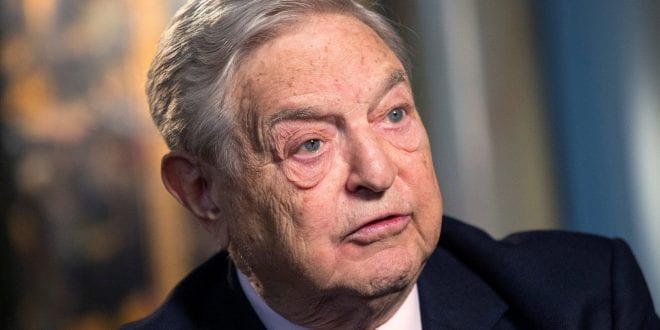 Most of Facebook Censorship Board Ties to George Soros

Herland Report: Judicial Watch, Facebook Censorship Board Ties to George Soros: The recently appointed Facebook oversight board that will decide which posts get blocked from the world’s most popular social networking website is stacked with leftists, including a close friend of leftwing billionaire George Soros who served on the board of directors of his Open Society Foundations (OSF).

Most of Facebook Censorship Board Has Ties to Leftwing Billionaire George Soros. Judicial Watch conducted a deep dive into the new panel that will make content rulings for the technology company that was slammed last year with a $5 billion fine for privacy violations, writes Judicial Watch.

The information uncovered by Judicial Watch shows that the group of 20 is overwhelmingly leftist and likely to restrict conservative views. More than half of the members have ties to Soros, the philanthropist who dedicates huge sums to spreading a radical left agenda that includes targeting conservative politicians.

Other Facebook oversight board members have publicly expressed their disdain for President Donald Trump or made political contributions to top Democrats such as Barack Obama, Hillary Clinton and Elizabeth Warren. As one New York newspaper editorial determined this month, the new Facebook board is a “recipe for left-wing censorship.”

Most of Facebook Censorship Board Has Ties to Leftwing Billionaire George Soros: Among the standouts is András Sajó, the founding Dean of Legal Studies at Soros’ Central European University. Sajó was a judge at the European Court of Human Rights (ECHR) for nearly a decade.

He also served on the board of directors of OSF’s Justice Initiative. Sajó was one of the ECHR judges in an Italian case (Latusi v. Italy) that ruled unanimously that the display of a crucifix in public schools in Italy violates the European Convention on Human Rights.

Most of Facebook Censorship Board Has Ties to Leftwing Billionaire George Soros: The decision was subsequently overturned. Sajó’s deep ties to Soros are also concerning. Through his OSF Soros funds a multitude of projects worldwide aimed at spreading a leftist agenda by, among other things, destabilizing legitimate governments, erasing national borders and identities, financing civil unrest and orchestrating refugee crises for political gain.

Incredibly, there is a financial and staffing nexus between the U.S. government and Soros’ OSF. Read about it in a Judicial Watch special report documenting how Soros advances his leftist agenda at U.S. taxpayer expense.

At least 10 other members of the Facebook oversight board are connected to leftist groups tied to Soros that have benefitted from his generous donations, according to Judicial Watch’s research.

The list of Facebook judges connected to Soros and the organized left continues. Julie Owono is the executive director of a Paris-based nonprofit, Internet Sans Frontieres, that advocates for privacy and freedom of expression online.

Most of Facebook Censorship Board Has Ties to Leftwing Billionaire George Soros: In 2018, Internet Sans Frontieres became a member of the Global Network Initiative, an internet oversight and policy consortium handsomely funded by Soros. Nighat Dad is a Pakistani attorney and the founder of the Digital Rights Foundation, a nonprofit organization based in Pakistan that has received $114,000 in grants from OSF. Dad’s group also gets funding from Facebook Ireland.

Others on the Facebook board have slandered President Trump in social media posts and donated money to high-profile Democrats. Taiwanese communications professor Katherine Chen’s Twitter account includes retweets of numerous anti-Trump and pro-Obama posts and articles.

Pro-Trump impeachment Stanford law professor Pamela Karlan, who took a cheap shot at President Trump’s teenage son during the Brett Kavanaugh impeachment hearings, has also contributed money to Obama, Hillary Clinton and Warren. The new board has only a few token conservatives such as Stanford law professor Michael McConnell, a senior fellow at the Hoover Institution.

The overwhelming majority of those making Facebook’s “final and binding decisions on whether specific content should be allowed or removed,” are leftists. They represent a new model of content moderation that will uphold “freedom of expression within the framework of international norms of human rights.”

Facebook’s economic, political or reputational interests will not interfere in the process, the company writes in its introduction to the new board.

Eventually the board, which will begin hearing cases later this year, will double in size. “The cases we choose to hear may be contentious, and we will not please everyone with our decisions,” Facebook warns.

The Herland Report Scandinavian news site, TV channel on YouTube and Podcasts have millions of readers/viewers yearly. It is a great place to watch interviews and read the articles of leading intellectuals, thought leaders, authors and activists from across the political spectrum. The Herland Report believes in freedom of speech and its editorial policy resides above the traditional Left vs Right paradigm which we believe has lost its relevance and ability to describe the current driving forces in Western politics.
Previous USA: Anarki og nasjonalt sammenbrudd, vil diktatur innføres?
Next Why the total silence on White Slavery? White slavery was normal in the Bysantine Period