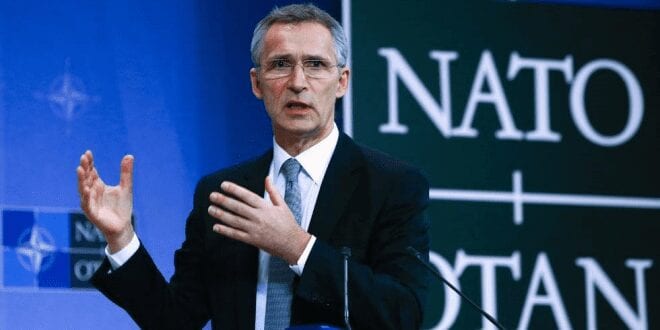 He is the very best puppet of the globalist elite, so good at parroting the wishes of the neo-cons that he recently was awarded an extended term – which is very rare. Most heads of NATO last maximum 5 years.

Apparently the reason for socialist Stoltenberg’s extended term is to block Trump’s man for the position. Trump wants to end the war in Syria, pull back American troops and concentrate on rebuilding the United States: the very opposite than the wishes of the globalist elite. (Photo: Scanpix)

In our lifetime NATO has gone from being a transatlantic defense organization that was to defend Europe if attacked, to becoming an aggressive geopolitical alliance which attacks weaker states wherever the United States’ economic interests are threatened.

It is this, new One World Order NATO that Jens Stoltenberg is head of and it is nothing to be proud of.

The flood of celebrations for NATO reached all time high this week, with parties being thrown for Jens Stoltenberg in Norway, a country with the public in complete oblivion as to the massive sell-out happening among its politician elites.

Yet, even in Norway the leading newspaper Aftenposten signals the underlying conflict of interest, as many on the Left wing now pose questions to the seemingly endless war mongering in NATO. Leading voices on the Left, such as the popular steigan.no steadily poses questions and demands accountability.

What prostitution does to you

Watching Jens Stoltenberg, a man who was against NATO in youth – a detail quickly removed from his Wiki when he became head of NATO, confirms the Norwegian’s role as the useful idiots.

Happy to get international positions, the Norwegians have acquired a remarkable line of officials now serving internationally. Sadly too often, the positions are awarded, seemingly in coordinance with millions flooding from the Norwegian state and its tax-payers money into Clinton Foundation etc.

The content of the NATO press conferences have changed dramatically after President Trump.
Under Obama, General Secretary of NATO, Mr. Jens Stoltenberg chronically spoke of the need to “escalate NATO along Russian borders, the Russian threat, Russia and ISIS stated in the same sentence as NATO enemies”, mimicking the very rhetoric that characterized the Obama administration.
The very minute President Trump takes the stage and even before he entered office, Mr. Stoltenberg completely changed his statements, now voicing the exact opposite.
The change of tone was remarkable to watch.
Now Russia “is not an equal enemy to ISIS, NATO needs to pull out of Syria”, now “we need to deescalate NATO” and “European nations need to pay their share in NATO expences”.
To watch recent NATO press releases and conferences, sharply illustrates the complete change of tone.

Stoltenberg’s speech in Congress – a first time for a NATO secretary – confirms his sad role as neo-con parrot: The stated assumptions underlying the alliance—that if it weren’t for NATO, Europe would either be overrun by the Russians or experience a back-to-the-future moment where German and French soldiers would be digging trenches in anticipation for another great European conflict—remain the same, writes the National Interest.

And if one dares to question these sacred cows or boldly point out NATO’s structural flaws, well, then you must be on Vladimir Putin’s payroll or hate democracy.

The effort to push the US to pay more of NATO expenses, as president Trump long has warned America is tired of funding the European show, was a clear take away from the Stoltenberg speech.

The globalist NATO of today is not the NATO after WWII

The main problem is that NATO has completely changed character since World War II. In our lifetime NATO has gone from being a transatlantic defense organization that was to defend Europe if attacked, to becoming an aggressive geopolitical alliance which attacks weaker states wherever the United States’ economic interests are threatened.

It is this, new One World Order NATO that Jens Stoltenberg is head of and it is nothing to be proud of. NATO is now global attack force.

“The future of the alliance, however, is precisely the problem. NATO is the proverbial, twenty-nine-nation zombie stumbling around like a headless chicken looking for new missions in order to stay in business for as long as it can”, to quote the National Interest: “Jens Stoltenberg delivered a highly choreographed lecture about why a twentieth-century relic like NATO is still a relevant security body in a twenty-first-century world.”

Time for the zombie to die

Let us hear what the Ron Paul Institute has to say about the matter: “Time for the zombie to die. If NATO were a person, it would be five years past retirement age.

In fact NATO should have retired back in the early 1990s when its reason for existence – the Warsaw Pact – ceased to exist, writes Daniel McAdams.

Instead, new missions had to be created and new enemies had to be made to justify the massive behemoth that provides lush jobs for the well-connected and vast fortunes for the weapons makers. NATO must die and the sooner the better.