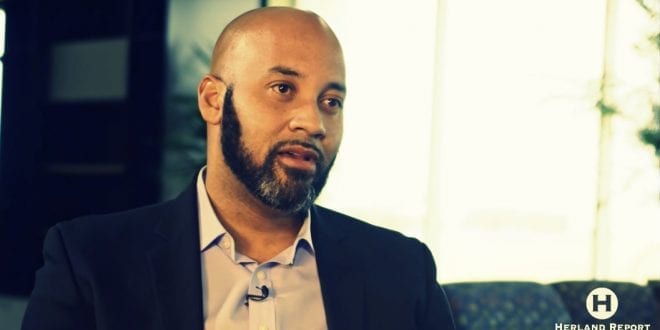 Herland Report TV: Hanne Nabintu Herland speaks to reverend DeVon Johnson about Christian culture and what seems to be a dramatic lack of Christian participation in public life.

Why are Christians often silent in the public debate?

Why do they seem to engage in their church communities but not in the public debate in society?

Are they forcefully kept out of distance by the New Left authoritarian media that is owned by the Liberals? Or are there other explanations?

Have they withdrawn in response to the persecution against Christians in the West?

“Who is balancing the class system, who will help bring justice? That’s the whole mission of the church”, says reverend Devon Johnson, who as traveled America speaking on college campuses and is one of the spiritual leaders in America, reaching the young minds of modern America.

Johnson says: “That’s the whole mission of the church, to start paving the way for heaven to be here! You want to give people this experience that Jesus did, and because we don’t do that it leaves our nation in shambles.”

“It is crazy to me that we literally let people starve in the streets. We had one of the coldest days in Houston’s history out here and there are literally homeless people who have died in alley ways because they had no place to go.”

“And we are in the “Bible belt”. We probably have more churches in the state of Texas than anywhere else in the nation. How does that happen when you have churches on every corner, and there are people who are dying in alley ways?”

It is impossible to exaggerate the importance of Christianity’s influence on Western values.

Many do not even know which these are nowadays, assuming that most of our central values are “secular” of origin. Yet, in reality our most cherished Western values originate from the pool of Christian ideals.

So, how did revolutionary message of the philosopher and spiritual leader, Jesus Christ impact Western civilization?

World leading historians agree that Christian philosophy was revolutionary in that its definition of humanity was inclusive of all people, an altogether new view on the value of human life.

It was Christianity that introduced the principle of equality, which unleashed the revolutionary idea that each man, regardless of class, gender and race, has a unique value.

The early Christians worked to relieve suffering, help the poor and so on. They taught humility and that all men were brothers.

As we live in an age of atheist intolerance in an unprecedented and highly intolerable level, where the mainstream media constantly focus negatively on Christians, Muslims and religions in general, we should rekindle the knowledge how how groundbreaking the message of Jesus Christ was.

We join Kanye West and Coldplay in their recent focus precisely on that.

Contrary to what many think, brainwashed as we are by the liberal-progressive Western atheists, a number of our most important values come from the Judeo-Christianity heritage and its ethics, writes founder of The Herland Report, historian of comparative religions Hanne Herland.

The statistics in favor of faith in God are remarkably high in the West. More than 80 percent of the American people believe in God, over 70 % in Europe believe that Jesus is the son of God. The number do not even include the high percentage of Muslims in Europe.

Research shows that only 2-8 percent of the world population is atheist. This is according to Pew Research Forum, Encyclopedia Britannica, ISSP 2008.

Still, believers in God are told by the current New Left atheist elites that they are old-fashioned, outdated and simply out of touch with reality.

So, everyone except the 4 % atheists in the world, are out of touch with “the real world”? How do atheists know that there is no Creator?

What do they know of “the real world” outside our universe? How can they prove that there is no God out there?

Atheism is itself a faith as no atheist has been outside the universe to examine whether there is a God out there. So, if you speak in faith about things you believe, why deny others to do the same?

Today’s intolerance among many atheists and total lack of respect for the diversity of belief in the world has a strong streek of totalitarianism in it.