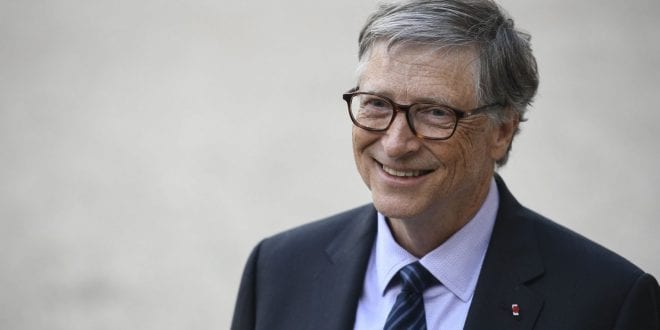 This has, in turn caused a once in a century financial depression.

The massive economic depression may not be due to the virus itself, but due to the panic reaction and fear of death that was created with the corresponding government shut-downs, as advised by Bill Gates.

As it turns out (read below), regular seasonal influenzas kill many more than the Covid-19 has done. And nobody listened to the experts who warned of the dangers of lock-down.

Once known as the shrewdest businessman alive and the world’s richest man, Gates is redefined in a remarkable PR coup as the world leading pandemic expert, philantrophist and world saver.

He is the owner of everything from charity to world vaccines, from medical research facilities, medical staff, distribution channels to vaccine factories. He is also the and of all sorts of public NGOs and WHO by the billions, recently criticized by Robert Kennedy for his “messianic complex”.

Gates is every state leader’s friend, if they contribute to his systems, donating state tax payers money into his pocket? Just look at oil rich Norway, suddenly pursued by Gates.

Our state leaders are eager to please the billionaire oligarchs and spend billions of taxpayer’s money while in office based on his advice.

As post-prime minister, many are offered jobs in precisely the same NGOs that they, while in political office, pushed the agenda of.

This is what we used to call corruption when it was done by African leaders. When white people do it, we assume it is called chivalry.

For the first time in history, lack of supply or demand did not shut down the economy and create the depression. State leaders forced the shut-down on their own nations, local businesses, industries, corporations and employers. The situation is unprecedented in history. And Bill Gates has been at the forefront in pushing for precisely this.

Two out of many experts that nobody listened to

“Veteran scholar of epidemiology Dr. Knut Wittkowski, formerly the head of the Department of Biostatistics, Epidemiology, and Research Design at Rockefeller University in New York City, argued in a interview published earlier this month that shelter-in-place policies could result in more deaths in the long term”, writes Daily Wire.

Nobody listens to Dr. Bhakdi as we have Bill Gates all over every news channel. Who needs experts when our billionaire oligarchs can tell us what we need to do.

The Corona Scandal Bill Gates panic shut-down prevents herd immunity: Daily Wire: The general argument made by Dr. Wittkowski is that lock-down orders prolong any efforts in developing so-called herd immunity, which is our only weapon in “exterminating” the novel coronavirus outside of a vaccine, and that could optimistically take longer than 18 months.

Focusing on shielding the most vulnerable to the virus (our elderly and folks with comorbidities) while allowing the young and healthy to build up immunity would, in the end, save more lives, Wittkowski argued.

The Corona Scandal Bill Gates panic shut-down prevents herd immunity: Here’s a portion of the “abstract” from his interview:

Containment of high-risk people, like the elderly, and reducing disease severity, either by vaccination or by early treatment of complications, is the best strategy against a respiratory virus disease. Social distancing or “lockdowns” can be effective during the month following the peak incidence in infections, when the exponential increase of cases ends. Earlier containment of low-risk people merely prolongs the time the virus needs to circulate until the incidence is high enough to initiate “herd immunity”. Later containment is not helpful, unless to prevent a rebound if containment started too early.

“With all respiratory diseases, the only thing that stops the disease is herd immunity,” the epidemiologist said. “

About 80% of the people need to have had contact with the virus, and the majority of them won’t even have recognized that they were infected, or they had very, very mild symptoms, especially if they are children.”

“If we had herd immunity now, there couldn’t be a second wave in autumn,” he said.

“Herd immunity lasts for a couple of years, typically, and that’s why the last SARS epidemic we had in 2003, it lasted 15 years for enough people to become susceptible again so that a new epidemic could spread of a related virus.”

“Because typically, there is something that requires cross-immunity, so if you were exposed to one of the SARS viruses, you are less likely to fall ill with another SARS virus. So, if we had herd immunity, we wouldn’t have a second wave.”

“However, if we are preventing herd immunity from developing, it is almost guaranteed that we have a second wave as soon as either we stop the social distancing or the climate changes with winter coming or something like that,” added Wittkowski.

Many more experts Gates and WHO did not listen to

The Corona Scandal Bill Gates panic shut-down prevents herd immunity: Dr. Wittkowski is not alone in his dissent against our nation’s tack in fighting COVID-19.

Dr. David L. Katz, president of True Health Initiative and the founding director of the Yale-Griffin Prevention Research Center, writing at The New York Times on March 20, suggested our “fight” against COVID-19 could be worse than the virus itself.

“The ‘unique’ nature of COVID-19 — that it results in only ‘mild’ symptoms in 99% of cases and that it appears to only pose a high risk to the elderly — Katz contends, makes it particularly suited for a more strategic containment effort, rather than our current unsustainable, society-wide approach that threatens to upend the economy,” The Daily Wire reported at the time.

“The clustering of complications and death from Covid-19 among the elderly and chronically ill, but not children (there have been only very rare deaths in children), suggests that we could achieve the crucial goals of social distancing — saving lives and not overwhelming our medical system — by preferentially protecting the medically frail and those over age 60, and in particular those over 70 and 80, from exposure,” Dr. Katz explained.

“I am deeply concerned that the social, economic and public health consequences of this near total meltdown of normal life — schools and businesses closed, gatherings banned — will be long lasting and calamitous, possibly graver than the direct toll of the virus itself,” he added.

Moreover, John P.A. Ioannidis, a professor at Stanford University School of Medicine with focuses on medicine, epidemiology, population health and biomedical data science, warned last month that we are working off incomplete data and potentially causing more harm in our response.

The woefully inadequate data we have so far, the meta-research specialist argues, indicates that the extreme measures taken by many countries are likely way out of line and may result in ultimately unnecessary and catastrophic consequences.

Due to extremely limited testing, we are likely missing “the vast majority of infections” from COVID-19, he states, thus making reported fatality rates from the World Health Organization “meaningless.”

“Patients who have been tested for SARS-CoV-2 are disproportionately those with severe symptoms and bad outcomes,” Ioannidis explains.

With very limited testing in many health systems, he suggests, that “selection bias” may only get worse going forward.

Regular seasonal influenza has higher death rates than Covid-19. Nobody mentions that

The Corona Scandal Bill Gates panic shut-down prevents herd immunity: Back to Herland Report: The Covid-19 has so far killed far less than regular seasonal influenzas, was assessed by “world pandemic expert,” Bill Gates to be a “once in a century pandemic” that could kill far more than regular influenzas. He was wrong.

Gates finally got his pandemic of which he has spoken for years, insinuating a possibility of 30 % death rate among the population. He was wrong in that too.

He suggested in a recent interview, that the opening up should not come until there is a digital immunity proof documenting who is vaccinated or not. The vaccine would be Gates owned, we assume. So, our economies should be shut-down for months, destroying the West completely?

Pandemic experts – those who experienced the last 3-4 influenza pandemics – were set aside and Gates funded WHO and other medical experts who agreed with him, pushed forefront.

The Herland Report Scandinavian news site, TV channel on YouTube and Podcasts have millions of readers/viewers yearly. It is a great place to watch interviews and read the articles of leading intellectuals, thought leaders, authors and activists from across the political spectrum. The Herland Report believes in freedom of speech and its editorial policy resides above the traditional Left vs Right paradigm which we believe has lost its relevance and ability to describe the current driving forces in Western politics.
Previous Western billionaire control of democracies – Bill Gates #Covid-19
Next Privateide Schibsted og mediene får milliardstøtte #Covid-19? Hva med Petter Stordalen?