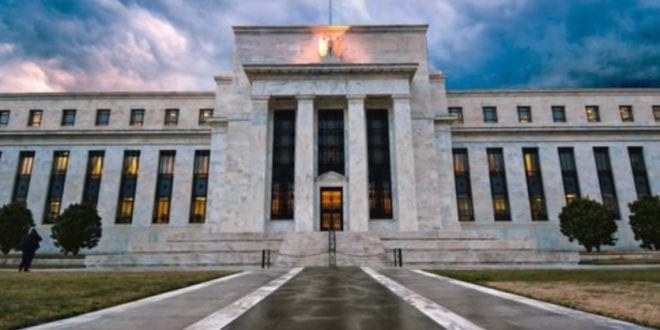 Herland Report: Federal Reserve Policy: Normally, recessions are the result of a reduction in liquidity by the Federal Reserve, the central bank, which is signaled by a rise in interest rates.

Normally, recessions are short-run affairs of 6 to 9 months.

Unemployment, which is as costly in its way as inflation, causes the Federal Reserve to relent and to increase liquidity, which is signaled by a reduction in interest rates, writes Dr. Paul Craig Roberts, chairman of The Institute for Political Economy, former associate editor of the Wall Street Journal, and a well known author of many books.

This approach assumes that inflation is a monetary phenomenon–too much money chasing too few goods.  But is the current inflation a monetary inflation?

The Federal Reserve’s response to the financial crisis of 2008-2009, itself caused by the deregulation of the banking system, was to create $8.2 trillion in new money with which to purchase troubled bank investments that threatened the large  banks’ balance sheets and transfer the troubled instruments to the Federal Reserve.

This money did not go into consumer prices. Instead it drove up stock, bond, and real estate prices.  The Fed stayed with this policy, which drove up the prices of financial assets, for over a decade, concentrating wealth in few hands.

Federal Reserve Policy:  The likely cause of the current inflation in US consumer prices is supply disruption.  The Covid lockdowns and mandatory closing of businesses disrupted and destroyed supply chains.

Shipping disruptions, which certainly reduce the supply of goods in an economy such as the United States, a country that has offshored so much of its manufacturing for internal markets, further reduced supply.

Economic sanctions against Russia have destroyed business relationships.  When too much money chasing too few goods is the consequence of supply reductions, not monetary growth, the problem needs to be addressed from the supply-side.  Higher interest rates actually raise costs and further restrict supply.

According to the Atlanta Federal Reserve bank, the US economy is in a second quarter of negative economic growth, that is, the economy is declining, not growing. Deutsche Bank supports this view.  Other large banks forecast a decline in growth.

Recession will worsen supply shortages if it is accompanied by the normal reduction in domestic spending and layoffs of employees.  In other words, the problem the US and associated economies face is not recession per se, but the Fed’s misunderstanding of the cause and utilization of a mistaken policy.

Even in its own terms, the Federal Reserve’s policy of restricting aggregate demand through higher interest rates will fail if it is offset by federal deficit spending, such as to finance Ukraine’s ability to wage war.

The Federal Reserve’s policy not only worsens supply aspects, but also threatens the accumulated wealth from years of high liquidity, as evidenced by the recent decline in stock and bond prices.

Federal Reserve Policy: If these reductions in the prices of financial assets threaten the banking, insurance, pension, and real estate sectors, the Federal Reserve will be forced to abandon its program of raising interest rates.

If the supply issues are not addressed, fear that the Federal Reserve has lost control of inflation could result in financial panic that would be self-intensifying.

Dr. Paul Craig Roberts is the chairman of The Institute for Political Economy, former associate editor of the Wall Street Journal, and a well known author of many books. He is also a regular contributor to the Herland Report news site as well as The Herland Report TV interviews on YouTube. He has had careers in scholarship and academia, journalism, public service, and business. He has been awarded the Treasury Department’s Meritorious Service Award for “his outstanding contributions to the formulation of United States economic policy.”
Previous War in Ukraine: We Are Heading for a Global Food Catastrophe
Next Prepare for the Reality of Financial Collapse