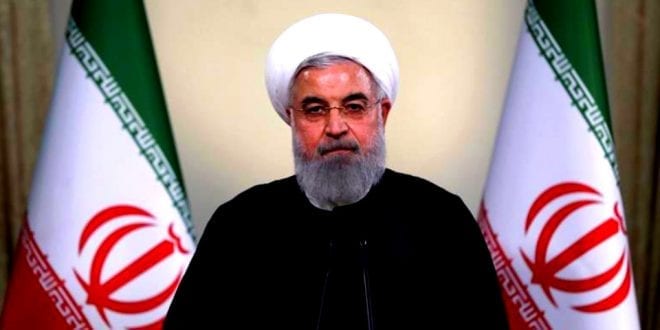 Herland Report: The neo-cons want Trump removed, push for Iran war: Speaking on state TV of the prospect of a war in the Gulf, Iran’s supreme leader, Ayatollah Khamenei, seemed to dismiss the idea.

“There won’t be any war. … We don’t seek a war, and (the Americans) don’t either. They know it’s not in their interests.”

The ayatollah’s analysis – a war is in neither nation’s interest – is correct. Consider the consequences of a war with the United States for his own country. Iran’s hundreds of swift boats and handful of submarines would be sunk.

Its ports would be mined or blockaded. Oil exports and oil revenue would halt. Air fields and missile bases would be bombed. The Iranian economy would crash.

Iran would need years to recover. And though Iran’s nuclear sites are under constant observation and regular inspection, they would be destroyed, writes Pat Buchanan, twice a candidate for the Republican presidential nomination and the Reform Party’s candidate in 2000. He is also a founder and editor of The American Conservative. (Feature photo: Hassan Rouhani. Al Jazeera)

The neo-cons want Trump removed, push for Iran war:  Tehran knows this, which is why, despite 40 years of hostility, Iran has never sought war with the “Great Satan” and does not want this war to which we seem to be edging closer every day.

What would such a war mean for the United States? It would not bring about “regime change” or bring down Iran’s government that survived eight years of ground war with Saddam Hussein’s Iraq.

If we wish to impose a regime more to our liking in Tehran, we will have to do it the way we did it with Germany and Japan after 1945, or with Iraq in 2003. We would have to invade and occupy Iran.
But in World War II, we had 12 million men under arms.

The neo-cons want Trump removed, push for Iran war:  And unlike Iraq in 2003, which is one-third the size and population of Iran, we do not have the hundreds of thousands of troops to call up and send to the Gulf.

Nor would Americans support such an invasion, as President Donald Trump knows from his 2016 campaign.

Outside a few precincts, America has no enthusiasm for a new Mideast war, no stomach for any occupation of Iran.

Moreover, war with Iran would involve firefights in the Gulf that would cause at least a temporary shutdown in oil traffic through the Strait of Hormuz – and a worldwide recession.

How would that help the world? Or Trump in 2020? How many allies would we have in such a war?

Spain has pulled its lone frigate out of John Bolton’s flotilla headed for the Gulf. Britain, France and Germany are staying with the nuclear pact, continuing to trade with Iran, throwing ice water on our intelligence reports that Iran is preparing to attack us.

So, again, Cicero’s question: “Cui bono?” Who really wants this war? How did we reach this precipice? A year ago, Secretary of State Mike Pompeo issued a MacArthurian ultimatum, making 12 demands on the Tehran regime.

Iran must abandon all its allies in the Middle East – Hezbollah in Lebanon, the Houthis in Yemen, Hamas in Gaza – pull all forces under Iranian command out of Syria, and then disarm all its Shiite militia in Iraq.

Iran must halt all enrichment of uranium, swear never to produce plutonium, shut down its heavy water reactor, open up its military bases to inspection to prove it never had a secret nuclear program and stop testing missiles. And unless she submits, Iran will be strangled with sanctions.

Pompeo’s speech at the Heritage Foundation read like the terms of some conquering Caesar dictating to some defeated tribe in Gaul, though we had yet to fight and win the war, usually a precondition for dictating terms.

Yet, as one looks again at the places where Pompeo ordered Iran out – Lebanon, Yemen, Gaza, Syria, Iraq – no vital interest of ours was imperiled by any Iranian presence.

The people who have a problem with Hamas in Gaza and Hezbollah in Lebanon are the Israelis whose occupations spawned those movements. As for Yemen, the Houthis overthrew a Saudi puppet.

Syria’s Bashar Assad never threatened us, though we armed rebels to overthrow him. In Iraq, Iranian-backed Shiite militia helped us to defend Baghdad from the southerly advance of ISIS, which had taken Mosul.

Who wants us to plunge back into the Middle East, to fight a new and wider war than the ones we fought already this century in Afghanistan, Iraq, Syria, Libya and Yemen?

Answer: Pompeo and Bolton, Bibi Netanyahu, Crown Prince Mohammed bin Salman and the Sunni kings, princes, emirs, sultans and the other assorted Jeffersonian democrats on the south shore of the Persian Gulf.

And lest we forget, the never-Trumpers and neocons in exile nursing their bruised egos, whose idea of sweet revenge is a U.S. return to the Mideast in a war with Iran, which then brings an end to the Trump presidency.

Patrick Buchanan has been a senior advisor to three Presidents, twice a candidate for the Republican presidential nomination, and the nominee of the Reform Party in 2000. Mr. Buchanan has written 14 books, including seven straight New York Times bestsellers: A Republic, Not an Empire; The Death of the West; Where the Right Went Wrong, State of Emergency, Day of Reckoning, Churchill, Hitler and The Unnecessary War, Suicide of a Superpower and The Greatest Comeback: How Richard Nixon Rose from Defeat to Create the New Majority. His newest book is Nixon’s White House Wars.

Previous War on Iran? No. Fire Pompeo & Bolton? Yes. — Robert D. Steele
Next An historical overview: United States and Venezuela, the country with the largest oil reserves in the world