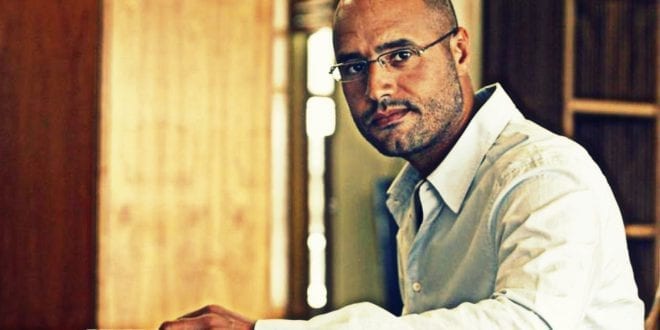 The new Libya: The return of a Gadhafi? Nabintu, WND

Share
Herland Report: Just as the Syria war did not end with ISIS capturing Damascus, the events in Libya equally have taken an unexpected turn as Dr. Saif al-Islam Gadhafi, the son of Col. Moammar Gadhafi, is a political candidate in the presidential election. (Photo: Saif al-Islam Gadhafi, Libya News)
His candidacy is supported by large segments within the Libyan people and viewed by many as a unifying force of reconciliation in war-torn Libya, writes historian, author and founder of The Herland Report, Hanne Herland at World Net Daily, one of America’s largest conservative news outlets.

To Western embarrassment Libya is still in total chaos, seven years after the 2011 intervention that killed Moammar Gadhafi. The NATO war did not exactly turn Libya into a success story for implementing “democracy.”

In my Foreign Policy Journal article from February 2017, “Could Moammar Gadhafi’s son Solve the Libyan Crisis?” I addressed this.

We all know the story. Since 2011, shocking media lies were revealed and today various militia groups hold the population hostage in a terror regime few thought possible a few years ago.

The British House of Commons’ devastating conclusion showed that the very premise for the intervention in Libya’s affairs was based on lies. Gadhafi was not murdering his own people, and there was no “genocide against his own people.” The war has later been nicknamed “Hillary Clinton’s and Nicolas Sarkozy’s war.”

The Gadhafis were well-known for being al-Qaida enemies, collaborating with the CIA to quench the Benghazi Islamist stronghold.

In 2007, President George W. Bush hailed Gadhafi for these efforts. Yet, after the U.S. foreign policy change toward Libya with the radical ambitions of Hillary Clinton, radical Islamist leaders such as Abdelhakim Belhadj came to power in 2011.

Before 2011, Libya was Africa’s richest country, rated by the U.N. as a middle-income welfare state in which citizens received lavish benefits, education was free for both men and women, medical expenses and electricity bills covered by the state.

Dr. Saif al-Islam Gadhafi, now renamed “Mandela Libya” in Libya, is educated at the London School of Economics and has a well-known track record.

Before the uprising, he was instrumental in liberalizing the economy and the press, an architect of the new Libya.

He presented his new vision of Libya free of political prisons, committed to human rights charter, distribution of wealth, prosperity and democracy.

In a recent interview, the brigade leader Ajmi el Atri, who captured Dr. Gadhafi and later surprisingly allied himself to the Gadhafi heir, says:

“If there is a new war tomorrow, we will fight against the Islamists armed groups operating outside the law and helped by The Muslim Brotherhood. According to Libyan law, Saif al-Islam is free; he is on Libyan territory. I think that two thirds of the Libyan people favor the former regime; the other third is nostalgic for the way we lived before.”

These words come from Gadhafi’s captors, who for years kept Saif Gadhafi in the Zindan prison, refusing to extradite him to Tripoli, where the EU-supported government had indicted him.

He is still wanted by the Western-controlled ICC, thus de facto prohibited from publicly running for the presidency.

It could be argued that the International Criminal Court case is used politically to prohibit a free Libyan election where all candidates are allowed to run.

In Libya, the argument is that Libyan law should be respected under which a person cannot not be tried twice for one alleged crime and that the ICC should drop the case. The militia-warlord control over Libyan prisons and power over the Libyan courts is notorious and many point to the fact that the allegations against Gadhafi have been proven to be lies.

From the African perspective, many feel that the ICC in The Hague only seem to prosecute Third World leaders, Serbians and Africans, but never Western leaders who commit atrocities against humanity.

A steady flow of political leaders from the non-white world have complained about what they call the racism of the ICC. Uganda’s President Yoweri Museveni is one of them.

President Donald Trump recently supported Italy’s attempt to forge peace in Libya. The Palermo Conference saw high attendance from France, the U.K. and the EU, yet demonstrated the tendency that Western elites seem bent on continuing to decide who is to rule Libya, excluding Dr. Gadhafi from the talks.

How can you support democratic elections in a country where you do not permit its people to choose their favored candidates? The Libyan Tribes’ demand is for such conferences regarding Libyan state matters to be held in Libya, for one.

Why does the EU and France – who were instrumental in bringing chaos to Libya in the first place – have the authority to decide who is to run? Or is a “free and fair election” not the aim of the Western effort?