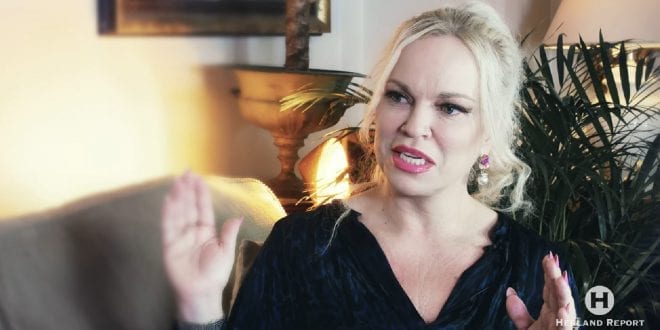 Herland Report: The Whoredom of the Left: Prostitution is the quintessential expression of global capitalism. Our corporate masters are pimps and the Left doesn’t care.

We are all being debased and degraded, rendered impoverished and powerless, to service the cruel and lascivious demands of the corporate elite, writes journalist and author, Chris Hedges.

And when they tire of us, or when we are no longer of use, we are discarded as human refuse. If we accept prostitution as legal, as Germany has done, as permissible in a civil society, we will take one more collective step toward the global plantation being built by the powerful.

But the Left broke apart in the 1970s over the failure to contend with racism and women’s rights. Globalization and neoliberalism have accelerated a process in which women are being sold wholesale.

Hedges spent two decades as a foreign correspondent in Central America, the Middle East, Africa and the Balkans, reported from more than 50 countries and has worked for The Christian Science Monitor, National Public Radio, The Dallas Morning News and The New York Times.

The Whoredom of the Left:  Poverty is not an aphrodisiac. Those who sell their bodies for sex do so out of desperation.

They often end up physically injured, with a variety of diseases and medical conditions, and suffering from severe emotional trauma.

The left is made morally bankrupt by its failure to grasp that legal prostitution is another face of neoliberalism. Selling your body for sex is not a choice. It is not about freedom. It is an act of economic slavery.

Lee Lakeman, one of Canada’s most important radicals, and several members of the Vancouver Rape Relief & Women’s Shelter, met with me one morning in their storefront office in Vancouver. Lakeman in the 1970s opened her home in Ontario to abused women and their children.

By 1977 she was in Vancouver working with the Rape Relief & Women’s Shelter, founded in 1973 and now the oldest rape crisis center in Canada.

She has been at the forefront of the fight in Canada against the abuse of women, building alliances with groups such as the Aboriginal Women’s Action Network and the Asian Women Coalition Ending Prostitution.

“It has become normal. But in periods of chaos it gets worse. We are trying to hang on to what we know about how to care for people, what we know about working democratically, about nonviolence, yet not be subsumed by the state. Yet we have to insist on a woman’s right not to face every man alone. We have to demand the rule of law.”

The Whoredom of the Left:  “Globalization and neoliberalism have accelerated a process in which women are being sold wholesale, as if it is OK to prostitute Asian women in brothels because they are sending money home to poor families,” she said.

“This is the neoliberal model proposed to us. It is an industry. It is [considered] OK … just a job like any other job. This model says people are allowed to own factories where prostitution is done. They can own distribution systems [for prostitution].

The only way to fight capitalism, racism and protect women is to stop men from buying prostitutes.

And once that happens we can mobilize against the industry and the state to benefit the whole anti-racist and anti-capitalist struggle.

“The left broke apart in the 1970s over the failure to contend with racism, imperialism and women’s freedom,” she said.

“These are still the fault lines. We have to build alliances across these gaps. But there are deal breakers. You can’t buy women. You can’t beat women.

You can’t expect us to coalesce on the ‘wider’ issues unless you accept this. The problem with the left is it is afraid of words like ‘morality.’

The left does not know how to distinguish between right and wrong. It does not understand what constitutes unethical behavior.”

Even though many radical feminists are deeply hostile to the neoliberal policies of the state, they nevertheless are calling for laws to protect women and demanding that the police intervene to halt the exploitation of women.

Lakeman and the other women have endured fierce criticism, especially from the left, for this advocacy.

“In the progressive left it is popular to be anti-state,” she said. “It is not popular to say we have to press the state to carry out particular policies.

But all resistance has to be precise. It has to reshape society step by step.

We can’t abandon people. This is hard for the left to get. It is not, for us, a rhetorical position. It comes from our answering the crisis line every day.

Previous Western sanctions may hurt the West and especially Europe much more than Russia
Next Faith is Scientifically Proven positive effect on Mental Health, WND